John Newman's Countdown to Darkness - Volume II in a Series 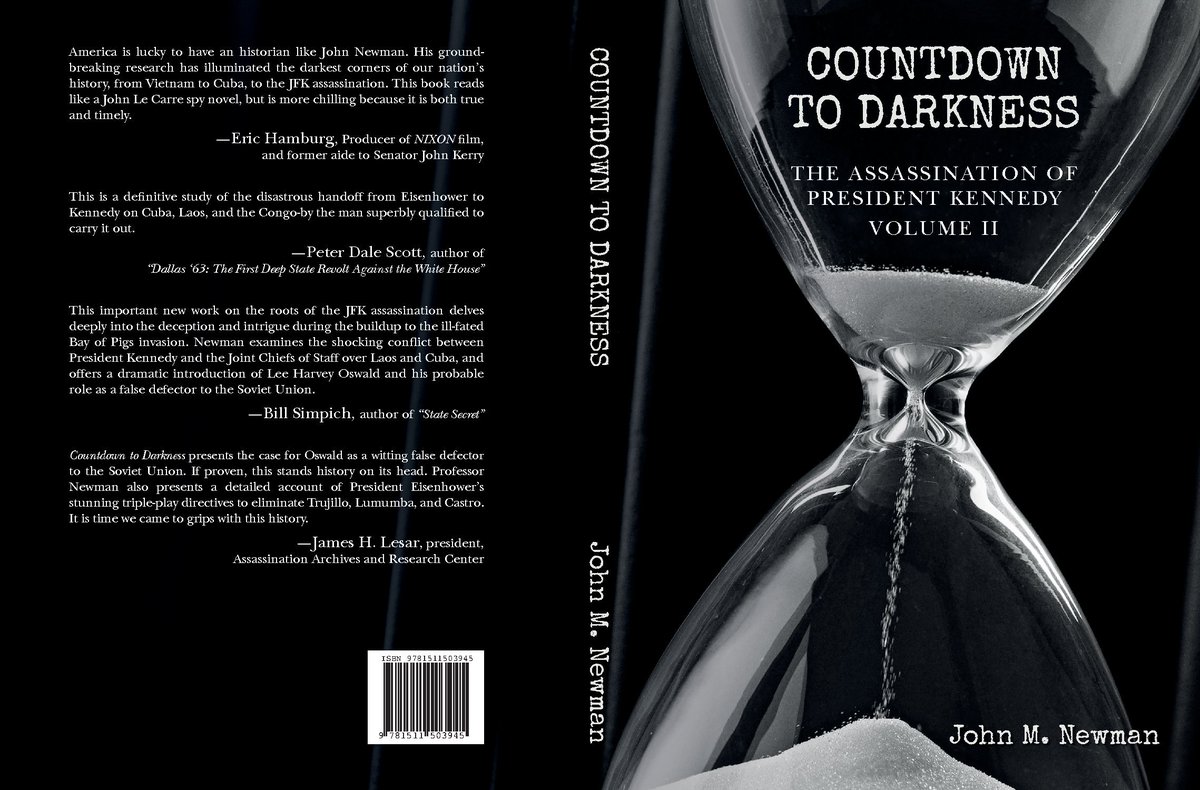 John Newman's first two installments in a series of books on the deep political and historic background to the assassination of John Kennedy are block busters that destroy the official myth that the president was killed by a deranged lone nut.

The first volume "Where Angels Tread Lightly," sets the historical backdrop to what happened at Dealey Plaza leading up to the election of JFK, while "Darkness" continues the chronology up to the Bay of Pigs fiasco in April 1961.

Each chapter and every statement are meticulously footnoted to government documents and personal interviews that clearly show how the accused assassin and ex-Marine defector was wittingly used in a counter-intelligence trap to catch a Soviet mole who had burrowed deep in the US government intelligence apparatus.

This mole exposed the U2 spy plane and a CIA spy Vladamir Popov to the Soviets and while there are suspects - Kim Philby, Donald McLean and Robert Lipka, he was never officially identified.

While Oswald’s operational intelligence role as a defector and his escapades in New Orleans and Mexico City do not prove he was acting as an agent in Dallas it certainly increases the chances that what happened at Dealey Plaza was a covert intelligence operation regardless of his role, but we haven’t gotten that far yet in Newman’s serial, and knowing what we have learned from the records already released, we look forward to seeing what will come out on October 26, to fill in the blanks.

Building on his first two well received histories - "JFK and Vietnam" and "Oswald and the CIA," Newman's new series will establish beyond a reasonable doubt that whatever you believe happened in Dallas that day it wasn't the work of one man alone, but "operational use" of the accused assassin in previous exploits increases the probability he was also utilized in what Bill Simpich calls "The Dealt Plaza Operation," as we shall henceforth refer to it.

Simpich wrote "State Secret," the definitive book on Oswald's ostensible visit to Mexico City, that you can read free on line at MaryFerrell.org. Of "Countdown to Darkness" Simpich wrote, "This important new work on the roots of the JFK assassination delves deeply into the deception and intriques during the buildup to the ill-fated Bay of Pigs invasion. Newman examines the shocking conflict between President Kennedy and the Joint Chiefs of Staff over Laos and Cuba, and offers a dramatic introduction of Lee Harvey Oswald and his probable role as a false defector to the Soviet Union."

While Newman, a former US Army intelligence officer himself, knows how to read a document, he first spent years dissecting aliases, codes and ciphers used to hide the true identities of the major players in this drama - many new names to even the most widely read assassination buffs.

It was in search of some CIA aliases, codes and ciphers in my own research that led me to Newman’s Countdown to Darkness, that had the answers to most of my questions. Though I had read Where Angels Tread Lightly and excerpted a chapter in the first edition of the CAPA Newsletter, I had yet to get to Countdown to Darkness when I learned about a group of former Warren Commission lawyers meeting in Washington DC last year.

From among them I did not recognize one – Samuel Stern, whose House Select Committee on Assassinations interview is astounding for its candor and revelations, what I call Smoking Document #2 (After the Higgins Memo.)

In his HSCA interview Stern is shocked when shown what is called the “Casasin Memo” (Smoking Doc #3 redacted and unredacted of November 25, 1963 that indicates the CIA had OI “operational interest” in Oswald, a document Stern had never seen and what gave him consternation – “They said they gave me everything.”

Most of the redactions in the Thomas Casasin Memo of 25/11/63 are alias and crypts, so even if you get past the redactions there’s another layer of secrecy and deception, which led me to Newman’s book where in Chapter 18 – Opening Oswald’s 201 File, he decodes the aliases and crypts – Redwood is Soviet and Eastern Block Division of CIA, KUDOVE is Deputy Director of Plans, LPOVER is Paris, ODACID is State Department, BI is Background Info and OI is Operational Interest, and he quotes the most pertinent parts of the memo – “We showed operational interest in the Harvey story.”

When Casasin was interviewed by the HSCA in 1978 he claimed not to know what the “Harvey Story” was all about, but in his memo he uses it in the same sentence as Lee Harvey Oswald, and it was the juxtaposition of “Harvey” and “Henry” in the CIA CI – Counter-Intelligence files and the opening of the Oswald 201 file that provides proof of the intentional deception and mole trap.

On other fronts, Newman exposes the charade of Oswald’s defection and the roles of John McVicker and Priscilla Johnson (McMillan), who was officially working for the North American Newspaper Alliance (NANS) at the time of her interview with Oswald in Moscow and was working for Ian Fleming of MI6 and Ivor Bryce, former OSS officer, then owners of NANA.

Newman also identifies, as far as can be determined, QJWIN – the European assassin recruited by the CIA to work on ZRRIFLE as Mavie Jose Mankel, who plays a role in a number of operations, including possibly Dealey Plaza.

Brick by brick Newman removes the wall of secrecy and deception, giving real names to aliases, identifying agents and their crypts, unredacting the white outs, and reassembling them in a way that corrects the record, so we can now rebuild the truth as to what really happened at Dealey Plaza.

When Sam Stern was asked by the HSCA what would have happened if the Warren Commission knew about the Mafia-CIA plots to kill Castro, he said that they would have looked a lot more closely at the Mafia and the CIA and their relation to Cuba and Oswald, and now John Newman is doing just that.