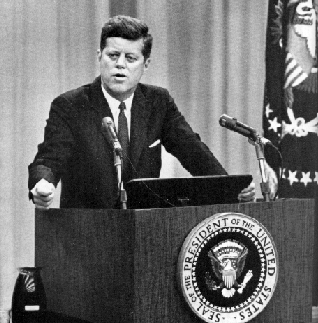 The Waters of Knowledge
versus the Waters of Uncertainty:
Mass Denial in the Assassination of President Kennedy

This is part of a speech Martin Schotz gave at the 1998 COPA in Dallas.
For the complete text see John Kelin at:

By cooperating in holding this society together through lies, we have made it that much more possible for our military intelligence apparatus to impose enormous suffering on people throughout the world. And this turmoil and mayhem has by no means been ended.

On April 25th of this year [1998], Guatemalan Bishop Juan Jose Gerardi Conedera was assassinated one day after he stood before an audience in the Metropolitan Cathedral of Guatemala City and gave a speech in which he presented the findings of an in-depth probe into thousands and thousands of murdered and disappeared persons, casualties of a campaign of terror against the people of Guatemala waged by their own government, a right wing militarist government which over the years has enjoyed the consistent training and support of our US military intelligence establishment, the well protected home of the assassins of President Kennedy.

I want to read to you some of the thoughts Bishop Conedera expressed in his April 24th speech. Amongst other things he said,

"The root of humanity's downfall and disgrace comes from the deliberate opposition to truth ... this reality that has been intentionally deformed in our country throughout thirty-six years of war against the people.

"To open ourselves to the truth and to bring ourselves face to face with our personal and collective reality is not an option that can be accepted or rejected. It is an undeniable requirement of all people and all societies that seek to humanize themselves and to be free....

"Truth is the primary word, the serious and mature action that makes it possible for us to break the cycle of death and violence and open ourselves to a future of hope and light for all...

"Discovering the truth is painful, but it is without a doubt a healthy and liberating action."

Juan José Gerardi Conedera was born in Guatemala City on 27th December 1922. He won a scholarship to study theology in the United States and after the Second World War returned to Guatemala where he was ordained as a priest.

In May 1967 Gerardi Conedera was appointed as Bishop of Verapaz. He developed a reputation for being deeply concerned about the indigenous communities in Guatemala. For example, he played an important role in securing authorisation for two radio stations to broadcast in Mayan languages.

In August 1974, Gerardi Conedera was appointed Bishop of Quiché. General Fernando Romeo Lucas García was elected President of Guatemala in 1978. Over the next few years the government resorted to political repression and assassinations of major progressive opposition figures. Conedera led the protests against the military government. While serving as president of the Guatemalan Conference of Bishops, he spoke out openly about the 31st January 1980 Spanish embassy fire in which 39 people lost their lives and in which government instigation was widely suspected. In June 1980 there was an attempt to kill Gerardi Conedera.

Soon afterwards the Bishop Gerardi was called to the Vatican to attend a synod. General Lucas García ordered that he should not be allowed to return to Guatemala. He travelled to neighbouring El Salvador, which refused to grant him right of asylum. Bishop Gerardi eventually settled in Costa Rica.

On 23rd March, 1982, General Fernando Romeo Lucas García was ousted from power by General José Efraín Ríos Montt. Condedera was now allowed to return to Guatemala. However, the new military government continued to persecute the indigenous Mayans, who were suspected of supporting the left-wing guerrilla movement in Guatemala.

In 1988 the Conference of Bishops assigned Juan José Gerardi Conedera to serve on the National Reconciliation Commission. Later he was appointed as Coordinator of the Human Rights Office for the Archdiocese of Guatemala and director of the Interdiocesan Historical Memory Recovery Project (REMHI).

On 24th April, 1988, Bishop Gerardi released a REMHI report entitled "Guatemala: Never Again." According to this report, 150,000 civilians had been killed and another 50,000 "disappeared" during the internal armed conflict. More than 400 villages were erased from the landscape as homes were burned, crops destroyed and the inhabitants cruelly massacred. The victims, for the most part, were Mayan peasant farmers from poor and isolated villages throughout the western highlands. And 90% of the time the perpetrators, REMHI confirmed, were members of the Armed Forces or the army-commissioned Civil Defense Patrols.

Two nights after Bishop Gerardi released his report he was attacked in his garage as he got out of his car. Gerardi was battered him to death with concrete slabs.

The Catholic Church in Guatemala, realizing that it could not rely on the legal system to look into the bishop's murder, took the controversial decision to form an investigative team of young men who called themselves Los Intocables (the Untouchables) to find the killers.

On 8th June 2001 three army officers: Byron Disrael Lima Estrada, Byron Lima Oliva and José Obdulio Villanueva, were convicted of his murder and sentenced to 30-year prison terms. A priest, Mario Orantes, was sentenced to 20 years for the crime.

Posted by William Kelly at 1:32 AM

Labels: The Waters of Knoweldge Speech