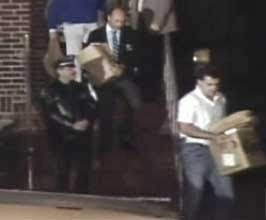 Detectives remove boxes and files from the New Jersey apartment of El Sayyid Nosair, Rabbi Kahane's assassin, who was at first labeled a "lone nut."

One question that always comes to mind when a catastrophic event occurs is whether it is an accident or a terrorist attack.

If the Pan Am 103 had exploded over the ocean instead of Lockerbie, Scotland, so the evidence could be accumulated, history may have recorded it as an airline accident rather than a terrorist attack.

Was the South Korean warship sunk by accident or an attack by a North Korean submarine?

Was the initial explosion of the BP oil rig in the Gulf an accident or sabotage?

The medical examiner in Dubai was about to declare the assassinated Hamas leader’s death a heart attack until someone identified the victim, and the assassination team was exposed by surveillance videos.

When spree killing mass murders like the Beltway Sniper, the Virginia Tech killer or the Fort Hood madman cut loose, the first thing we want to know is whether it’s a Lone Nut or a Terrorist Attack.

On November 5, 1990, the founder of the Jewish Defense League Rabbi Meir Kahane was shot by 35 year old Egyptian militant El Sayyid Nosair in the ballroom of the Marriott Hotel in midtown Manhattan. The assassination was videotaped as Nosair shot Kahane with a .357 Magnum revolver and yelled, “It’s Allah’s will,” before fleeing, escaping in a cab and shooting a policeman who tried to stop him.

Well shortly thereafter the chief of NYPD detectives Joseph Borelli called a press conference to announce that Kahane’s murder was the work of “one, deranged gunman” and had no ties to “known terrorists or Middle East conspiracies.”

This was despite the fact that it had already been established Nosair had an accomplice at the hotel, a getaway driver in a taxi, and two former Arab roommates who acknowledged they too were at the hotel at the time of the assassination, and were taken into custody.

When Borelli asked the lead investigator Lt. Edward Norris if “this was the work of one man?” Norris responded, “Absolutly not.”

But when Norris began to tell Borelli about the two roommates in custody, Borrelli said, “You, shut up. You do murder cases. They (the FBI) do conspiracies.” Borrelli then told Norris he didn’t have enough evidence to hold the roommates and was told to let them go.

Before the day was out however, detectives had discovered Nosair’s other apartment in New Jersey, from where they removed 16 boxes of files, training manuals from the Army Special Warfare School at Fort Bragg, copies of teletypes to the Secretary of the Army and Joint Chiefs of Staff, bomb making manuals, maps of major landmarks, including the Statute of Liberty, Rockefeller Center and the World Trade Center, and an assassination hit list.

According to John Miller, “On the third day after the shooting, while Norris was out to lunch, the FBI removed Nosair’s 16 boxes of files from Norris’ squad room. Unfortunately, the evidence was about to enter a black hole. The FBI now says it turned the files over to the Manhattan District Attorney’s Office, after it was decided, following a series of meetings and phone calls, that the local prosecutor and the NYPD would have exclusive jurisdiction over the murder case…The bulk of the material remained untranslated and unread for nearly three years.”

“Many officials, Norris among them, have since claimed that he files provided a virtual road map to future terrorist acts, including the 1993 World Trade Center bombing. Along with the military documents, the bomb manuals, and the diagrams and photos of New York landmarks, the Nossair papers contained a manifesto exhorting his associates to toppled the ‘tall buildings of which Americans are so proud.’”

“Of course, even without the files, Eddie Norris never believed Kahane’s assassination was the work of a lone gunman. Just given the little he had learned during those first few days after the shooting, Norris felt that Nosair was involved in something much larger, something that would come back to haunt law enforcement – hell, even the whole city….In fact, in any attempt to understand the events of September 11, 2001, it makes sense to begin with El Sayid Nosair. That’s where the law enforcement aspect of the September 11 story began, and when American law enforcement agencies first revealed themselves to be institutionally ill-equipped for the war this new enemy had brought to U.S. shores.”

As Miller tried to explain, “Now this may come as a surprise, but I consider Joe Borelli to be a friend of mine…But back in 1991 he was a loyal general, not a revolutionary, and the prevailing theory in the NYPD was, ‘Don’t make waves.’ That is why a commander in those days who uncovered corruption was blamed for causing scandal rather than rewarded for cleaning house. And why a commander who called the media’s attention to a serial rape suspect was rebuked for bringing pressure on the department instead of being applauded for warning the public. So in the Nosair case, when Chief Borelli turned a blind eye to the obvious, he was merely remaining true to the culture of the NYPD. The thinking was, don’t take a high-profile homicide case that could be stamped ‘solved’ and turn it into an unsolved conspiracy. To do so would create a lot of extra work. Instead of getting the press and Jewish community stirred up about the bad guys still out there, it was just so much simpler to say, the bad guy got Kahane, we got the bad guy, and it’s all over. No pressure, no panic, no more headlines.”

It was later determined that the special operations military manuals and Joint Chiefs of Staff memos found in Nosair’s Jersey apartment, belonged to one Ali Mohammad, a former Egyptian army officer who had enlisted in the US Army and was an instructor at the special forces school at Fort Bragg and Quantico - an al Quada infiltrator a decade before 9/11.

This is the reason why all of the government records related to the assassination of President Kennedy must be released to the public, why Congress must carry out its oversight responsibilities and why grand juries should be convened in the appropriate jurisdictions to determine the truth and whether justice can still be served. The effort must be made in the name of national security and to prevent such political assassinations from happening again.

And until the issue is addressed, the assassination of President Kennedy is something that will continue to come back and haunt us until it is resolved to a legal and moral certainty.