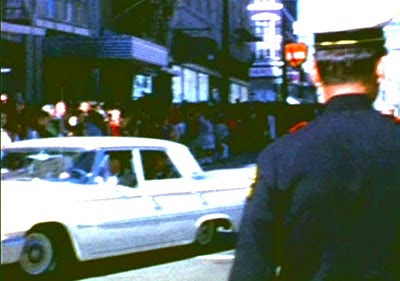 (1) The pilot car. This is usually a local law enforcement car driven and manned by local officers. It precedes the main party over the route by approximately one-quarter mile. Its function is to alert the local officers along the route that the presidential motorcade is coming and to check ahead for any signs of trouble, disturbance or other complications. Occassionally it drops back to help with crowds. It is in radio communication with the lead car and other Dallas cars and stations....

Recently it was the 47th Anniversary of the assassination of President John F. Kennedy.

Recently it was the 47th Anniversary of the assassination of President John F. Kennedy.

Since I was an advance man on that Presidential visit Nov. 22, it has a special meaning to me.

For that assignment we left on Nov. 12 on a Military Air Transport Service plane, and dropped off a crew of three at each of the places the President was to visit.

The Dallas crew, which included Secret Service Agent Win Lawson, Chief Warrant Officer Arthur Bailles of the Army Signal Corps and myself, were the last to land. The Dallas Presidential event was sponsored by the Dallas Citizens Council, whose members were the city's "shakers and movers."

Before we left we were informed that two possible locations were under consideration for the luncheon—a building on the State Fair Grounds and the Trade Mart—and that there would be a motorcade. There were some security concerns expressed about the Trade Mart building, but those concerns would be reviewed by the Secret Service.

After looking at the proposed sites and reviewing the motorcade route, and following a determination by the Secret Service that the Trade Mart building could be secured, a decision was made to select the Trade Mart and the subsequent route for the motorcade. The rest of the time was spent on who would be invited to the luncheon. There would be 2,500 at the luncheon, and there was competition regarding who would be the fortunate diners.

By the morning of Nov. 22, all of the details had been worked out, and when Air Force One put down at Love Field the expectation was the Dallas visit was going to be a big day for the President and Mrs. Kennedy.

When the motorcade pulled out I was in what is known as the "pilot car," a vehicle that is some five or six blocks ahead of the main motorcade. As we traveled the motorcade route, the crowds were huge and friendly as they awaited the arrival of the President.

The pilot car was a Dallas Police vehicle, and shortly after entering the Stemmons Freeway, there was a radio message that instructed all available police officers to report to the triple underpass area, and to alert the emergency facilities at Parkland Hospital.

Our car pulled over to the shoulder of the road and stopped. When the President's car and the Secret Service follow car sped by, we pulled behind and followed them to Parkland Hospital. For our country it was a very sad day, and unfortunately something was lost that has never been replaced. Thus, Nov. 22 will always have a special meaning to me.


BK: Neither Phil Melanson's The Secret Service- The Hidden History nor The Kennedy Detail, include the pilot car in their story of JFK's motorcade through Dallas, and it is not mentioned in the first Secret Service report

Melanson's study of the Secret Service procedures, especially its Protective Research Section (PRS), concludes that the Dallas Police Department Criminal Intelligence Section (DPD CIS) the PRS was depending on for local information, was responsible for the accused assassin Lee Harvey Oswald not being on the Secret Service 400 suspect Watch List.

The CIS had identified a dozen organizations that they considered worth keeping tabs on, including the Fair Play for Cuba Committee (FPCC) and American Civil Liberties Union (ACLU), two organizations that Oswald was affiliated with, that should have put him on their radar.

In addition, as Melanson also points out, they failed to identify the group of anti-Castro Cuban Alpha 66 terrorists that had taken up residence in a house in Oak Cliff, where Oswald was reported to have been seen.

We later learn, when Manuel Rodriguez was misidentified as Oswald in Oklahoma, that it was not Oswald but probably Rodriguez who was seen at the Alpha 66 house in Oak Cliff. One must wonder if there were any other incidents where Rodriguez was misidentified as Oswald, as there were numerous occasions where Oswald was said to have been when he most certainly couldn't have been. Some of these cases can be shown to be cases of mistaken identity, but some can also be shown to be cases of intentional impersonation.

The ATF agent in Dallas had learned from a local Dallas gun dealer, who also resembled Oswald, that Rodriguez was trying to buy arms for his group to attack targets in Cuba, and this agent and FBI agent James Hosty, along with US Army Intelligence officer Ed Coyle, met together on the morning of the assassination to discuss this case.

But it was a Deputy Shriff (Buddy Walters?) who informed the Secret Service about the Alpha 66 being in Dallas after the assassination.

Jones was also familiar with Capt. James Powell, who photographed the scene of the crime shortly after the assassination, and said both Jones and Coyle were working that day, while Powell says he took off to photograph the motorcade on his own time. Jones also said that there were eight to ten other plainclothes officers from his group who worked on security for the President's visit to Texas, including Dallas.

But Jones did not know or recognize the name of Gen. Whitmyer, the head of the 488th Army Reserves unit based in Dallas, whose officers included men in the pilot car of the motorcade and the entire 50 man Criminal Intelligence Unit (DPD CIU) including Lt. Jack Revell and Captain Gannaway, who ran most of the informants for the Dallas Police Department. [It has been reported that the office of the CIU Special Services Unit was at the Texas State Fairgrounds, rather than DPD HQ, so informants could report in without being seen at the DPD HQ.]

According to The Kennedy Detail (Blaine, Hill et al, 2010), the PRS didn't have one suspect in the Dallas area among their top 400 suspicious subjects on the Watch List, yet there was an ongoing investigation into those who were filmed by a TV news crew physically assaulting United Nations Ambassador Adli Stevenson.

In addition, we learn from J. E. Hoover's memo to Secret Service Chief Rowley (Dec. 18) that the FBI did indeed tip the Secret Service off about a suspect who threatened the president, a John Birch Society (JBS) college student whose threat was reported by a DPD CIU informant and investigated by Revell and Gannaway. They apparently talked with the suspect, who said he wasn't going to be in Dallas when the President was there, and they apparently took his word for it.

Revell and Gannaway, along with the other fifty members of the DPD CIU were members of the 488th US Army Reserve unit under Gen. Whitmyer, who reportedly said that his unit was ordered to stand down and not participate in the security for the president's visit, as they normally should have been.

According to Peter Dale Scott's Dallas COPA (2010) address, this car pulled to the side of the road in front of the TSBD and Capt. Lumpkin talked briefly to one of the three police officers assigned to traffic duty at that intersection (Huston & Elm), sixty feet below the Sixth Floor Sniper's window. Except there is no mention of this stop or what was conveyed to the cops in the official reports.

The driver of the car was Deputy Chief G. L Lumpkin.

Two homicide detectives were also in the Pilot Car.

Col. Whitmeyer was the Commanding Officer of the NorthernDistrict of Texas and gave the military "stand down" order.

But Lumplin was the highest ranking reserve Col. In the Military Intelligenceand had to have given Whitmeyer this order.

And introduces yet another federal intelligence/law enforcement agency into the mix -
the US Alcohol Tax Unit - who are these guys? Did they file reports or what?

Further confirmation of the occupants and locations.


How did the Sixth Floor Sniper Know when the Target Car would be in the Kill Zone?

I think the Pilot Car told him.

Since the Pilot Car pulled over to the curb at Houston and Elm and the passengers talked briefly to one of the three traffic and crowd
control cops standing on that corner, the passengers in the car were facing the TSBD, and the Sixth Floor Sniper's Window was sixty to eighty feet away,
or less than thirty yards on a football field. Could what is being said on the ground be heard clearly on the Sixth Floor?

Less than an hour later, a deputy sheriff called down from the same window to Capt. Fritz and told him that was the Sniper's Nest, and I don't believe he had to yell.

The exact distance can be figured out by determining the distance from the curb to the TSBD building and the height of the building
will give you two sides to the angle, the thrid side being the distance between the curb and Sixth Floor window.

Since the car was facing the TSBD the report to the policeman would have been directed towards the assassin and he
could possibly have heard it.

Or he could have just surmized that the Pilot Car was a forerunner to the motorcade and Target Car.

Did the Pilot Car also call in their location and timing of the motorcade while they were stopped there?

If so, their report would have been broacast and this report amplified by the policemen's radios in the facinity, or the radio in the car.

Do the tapes or transcripts of Channel Two indicate that the Pilot Car broadcast their locaton or the location of the motorcade during their
journey?

Mr. Lumpkin served for 40 years in the Police Department and played a significant role in the investigation of President John F. Kennedy's assassination, his family said.

"Dad was in the lead car of the motorcade," said his daughter, Maureen Stone. "He was also one of the first to reach the hospital when Kennedy was shot."

He also served 39 months in the Army during World War II, receiving the Bronze Star for taking part the capture of 30 prisoners, his daughter said.

"He captured them without killing them," Mrs. Stone said. "My father believed in not using guns unless necessary."

He retired as a colonel from the Army Reserves and was awarded the Legion of Merit for his service as commandant of the Dallas Area Army Reserve School.

Other survivors include his wife, Katherine Lumpkin; son Michael Lumpkin of Dallas; sister Mildred Bunch of Arlington; six grandchildren; and two great-grandchildren.
Posted by William Kelly at 2:04 AM