Kirk was later appointed US Ambassador to the Soviet Union and worked in psychological operations, organizing the staff of Radio Liberty and AMCOMLIB - the American Committee for Liberation from Bolshevism. 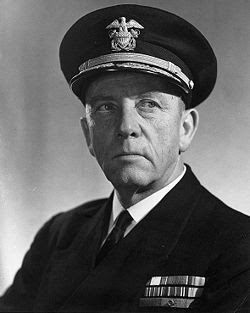 According to the Raab Collection abstract related to the sale of the Air Force One Radio Transmission tape, JFK enlisted in the Navy with the help of Captain Alan Kirk, the Director of the Office of Naval Intelligence and a friend of JFK's father.

From his official record, Alan Kirk was indeed a Naval attache stationed at the US Embassy in England when JFK's father was the US Ambassador to the Court of St. James.

JFK was himself attached to the Office of Naval Intelligence (ONI) until his escapades with a European beauty queen and North American Newspaper Alliance (NANA) correspondent caught the attention of J. Edgar Hover. Since JFK's girlfriend had previously known Hitler from the Berlin Olympics, Hover suspected she was a spy, and reportedly tape recorded their interactions during a weekend at Charleston, South Carolina, after which JFK left ONI and assumed the command of PT-109 in the Pacific.

Alan Kirk also went on to become an important Naval officer during the war, commanding all US navy actions in the English Channel during he D-Day invasion of France.

Here's what the Raab report has to say, and the official background on Captain Kirk.

...seeing (as most did not) that the war was inevitably coming to America too, he determined to join the U.S. Navy. Since he had a bad back and was really a candidate for 4F status, Kennedy only managed to enlist with the active help of Captain Alan Kirk, the Director of the Office of Naval Intelligence, a friend of his father, Joseph Kennedy. In October 1941, Kennedy was appointed an Ensign and joined the staff of the Office of Naval Intelligence. By the start of 1943, he was in the combat zone and was given command of a torpedo boat named PT-109…..

He graduated from the U.S. Naval Academy in 1909 and served in the United States Navy during World War I and World War II. During his wartime naval service, Alan Kirk became the U.S. naval attaché in London (1939 to 1941). He was Director of the Office of Naval Intelligence from March 1941 but, obstructed and opposed by Rear Admiral Richmond Turner, he was unable to develop the office into an effective centre along the lines of the British Royal Naval Operational Intelligence Centre (which he had seen whilst in London). Eventually, he requested a transfer to an Atlantic destroyer squadron.

Kirk served as an amphibious commander in the Mediterranean in 1942 and 1943 (the Allied invasion of Sicily and Italy). In addition, he was the senior U.S. naval commander during the Normandy landings of June 6, 1944 embarked on the heavy cruiser USS Augusta (CA-31), and as Commander U.S. Naval Forces, France during 1944 and 1945. He retired from the Navy as a full admiral in 1946.

Admiral Alan G. Kirk took his post as the second president of Amcomlib, in February 1952. As a former U.S. ambassador to the Soviet Union, he oversaw the recruitment of emigres in New York and Munich, a group that would later form the core of Radio Liberty's staff. Less than a year after taking office, Kirk was forced to resign due to poor health. Also in 1952, he served briefly as Director of the Psychological Strategy Board, which planned for and coordinated government psychological operations.[2]


The American Committee for Liberation from Bolshevism began operations in 1950 and was officially incorporated in January 1951. Amcomlib did not begin operations with the fanfare and high visiblity that had marked the launching of the Radio Free Europe Committee. There were no public campaigns or crusades on Amcomlib's behalf. It did not send leading exiles on public speaking tours, nor did its board of directors consist of a blue-ribbon roster of eminent leaders from business, labor, the military, the press, and the entertainment world. Amcomlib's funds were provided exclusively by the American government through the budget of the Central Intelligence Agency. To question the source of the revenue, Amcomlib officials would say that the money was donated by wealthy individuals who were interested in the organization's mission. No names were mentioned, and reporters did not press the matter further.

The man responsible for assembling Amcomlib's board of directors was Franklin A. Lindsay, an aide to Frank Wisner at the Office of Policy Coordination. Whereas board members for the Free Europe Committee were selected for their wealth, public visibility, and influence in Washington, the principal criterion for membership on Amcomlib's board was familiarity with conditions in the Soviet Union.

The first chairman was Eugene Lyons, a Reader's Digest editor and former correspondent in Moscow who, having become disillusioned with the Soviet system, had written The Red Decade, a classic study of Communist influence in American culture....

In announcing its formation, Amcomlib was blunt about its purpose: to provide assistance to anti-Communist exiles who were working for the overthrow of the Soviet regime...

Thomas Braden and Cord Meyer were the CIA officials responsible for the freedom radios.

The man responsible for assembling Amcomlib's board of directord, Franklin A. Lindsay, an aide to Frank Wisner at the Office of Policy Corrdination.

Sparks of Liberty: An Insider's Memoir of Radio Liberty By Gene Sosin

We (Ant's Eye View) have certainly experienced The staffing agency this. I'd likely add the following to your list of reasons why: The service provider of the future (particularly in the enterprise) must be as comfortable with VP's of Customer Service, Support, IT and Product (BU's) as the are with sr. leaders in Corporate Communications and Marketing.