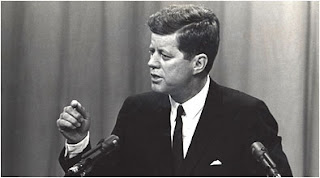 THE 29TH MOVEMENT – THE FILES

–Release the , the Joannides file and all the remaining government records on the assassination of President John F. Kennedy.

Most American presidents and historical figures are honored on their birthday, but few people would know that May 29th is the birthday of John F. Kennedy, the thirty-fifth president of the , and instead, we think of him on the day he was murdered.

While his birthday goes unrecognized, everybody who was alive at the time or with any sense of history registers November 22 with the assassination of President Kennedy, just as December 7th and September 11th are recognized as watershed benchmarks of modern American history.

John F. Kennedy was born on in the master bedroom on the second floor of . The Harvard educated Navy war hero would be elected to Congress, serve as a Senator and President of the until he was assassinated while riding in a motorcade through downtown on .

Although the Kennedy family says they would rather celebrate JFK’s life, administration and policies rather than his death, they are annually seen kneeling by the eternal flame at the grave site every November 22nd, and his life and policies go generally unheralded as we live through the 50th anniversary of his administration.

The Bay of Pigs was duly noted, the establishment of the White House Situation Room (WHSR) was honored by naming it after Kennedy, and the Cuban Missile Crisis will be remembered, but the 50th anniversary of the assassination is greatly anticipated with a plethora of feature articles, books, documentary films and major motion pictures due out over the next few years.

This renewed interest in the assassination is expected to fuel the debates over whether the assassination was the act of one deranged gunman or the result of a well planned and successfully executed conspiracy, and add credence to the call for the release of the remaining records related to the assassination that are still being withheld by the government.

Conspiracy theorists, who outnumber those who defend the Warren Commission’s lone-gunman conclusion by an eight to one margin, are both united in the call for the release of all the remaining government records on the assassination, which was mandated by a law that is not being effectively enforced.\

The JFK Act of 1992, although “the law of land,” has seen no Congressional oversight despite the flagrant destruction of files, the loss of many records and the continued withholding of thousands of records, in the name of national security, despite the fact they were created nearly fifty years ago.

Professor Peter Dale Scott, who has studied the assassination closely, suggests a “Negative-Template” thesis in which the most significant records are those that are destroyed, missing or with held, and that any investigation of the assassination itself should focus on those records.

There are a number of active efforts underway to replicate the destroyed files, locate those that are missing and to free those that are being withheld, all without the support and cooperation of Congress, the courts or the administration.

Despite the reluctance of Congress to conduct oversight hearings of the JFK Act for the past fifteen years, there is an active internet lobby effort to at least try and convince Congress to do its job, however unlikely that seems.

The courts have recently ruled against release of the remaining withheld internal report on the April 17, 1961 Bay of Pigs invasion of Cuba, and seem reluctant to order the to release their operational files on the now deceased officer who ran the anti-Castro Cuban group that the accused assassin associated with, and who later effectively stonewalled the House Select Committee on Assassination (HSCA), assigned to investigate the assassination.

The President, in his first act in office, issued an Executive Order that called for the implementation of a new policy of transparency and open government, and established the Declassification Review Board, which at first said it was going to place a high priority on topics of public interest, including the JFK Assassination, but has since back-tracked and may not pursue any JFK assassination records at all.

Jim Lesar wrote a letter requesting the to A – that goes unanswered, as does the suggestion for the to create a special project to declassify the JFK Assassination Records, as they have done with the and Cuban Missile Crisis.

When the asked for public input, Dan Alcorn suggested they create the special assassination records project, and with over three dozen public votes and positive comments, the suggestion was the top rated idea presented on the public forum.

Yet, has so far failed to respond.

The JFK Act requires all the records to be released by 2017 but it is widely expected that the and other agencies will request the President to continued withholding these records indefinably on grounds of national security. This date should be accelerated and the records released by 2013, which can happen if they are included among the records reviewed by the .

Regardless of whether there was a conspiracy to kill President Kennedy, there is certainly one to hide the true record of his death, as a group of distinguished British historians put it, “there has never been a more subversive, conspiratorial, unpatriotic or endangering course for the security of the United States and the world than the attempt by the United States Government to hide the murderers of its President.”

It is now in the interests of national security, not to withhold the remaining records on the fifty year old assassination of President Kennedy, but to release them to the public.

The May 29th Movement is hereby launched in order to support of all of these efforts, and to call attention to and build national momentum towards a release of all the remaining JFK assassination records by 2013.

Posted by William Kelly at 5:53 PM