Protest at the National Archives to Free the Files 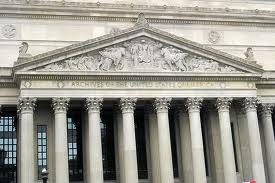 "THE PAST IS PROLOGUE"

Protest at the National Archives to Free the JFK Assassination Files

The National Archives' decision is in violation of President Barack Obama' executive order of Tuesday, December 29, 2009 that "no information may remain classified indefinitely" as part of sweeping overhaul of the executive branch's system protecting
classified national security information.

Many thanks to Paul Kuntsler for coordinating this protest. It will be a non-violent protest to free the remaining withheld JFK assassination records, not a debate on the assassination. - BK

Posted by William Kelly at 2:59 PM

The murderers are still alive, they will NEVER get out till they are dead, and maybe not even then.
It was a coup d' etat.
Garrison was right, the feds tried to destroy him, enough proof?