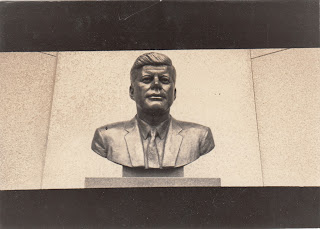 JFK Bust at Kennedy Plaza on the Atlantic City Boardwalk 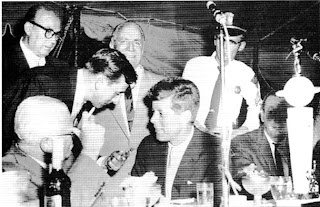 Skinny D'Amato and JFK during the 1960 Campaign

As the nation and the world reflect on the legacy of President John F. Kennedy in the course of the media frenzy building up for the 50th anniversary of his murder, Atlantic City's role in the Kennedy Story should be recognized and recorded for the record.

In looking back over time since the assassination of President Kennedy, it's quite clear
that Atlantic City played a major role in the evolving course of events and some of its residents were major characters in the Kennedy drama, which was sometimes comic and other times tragic.

Although you wouldn't know it, the boardwalk in front of Boardwalk Hall is officially known as Kennedy Plaza, and if you look for it, back against the rail, there's a life-sized statute, a shoulders and head bust of President Kennedy by renown sculpture Evangelos Frudakis.

Unveiled by New Jersey Governor Richard Hughes at the time of the 1964 Democratic National Convention, held at Boardwalk Hall, then known as Convention Hall, the beautifully sculptured bust is much more attractive than the bland monument to JFK erected by the city of Dallas.

Not to be left alone, JFK's bust has been more recently joined by other lesser known local political figures, but JFK stand there today as a reminder of what might have been had he not been murdered in Dallas fifty years ago this November.

If JFK was not killed he most certainly would have been re-nominated as the Democratic Party's candidate for President, and Atlantic City would have been the place to celebrate and party, with Frank Sinatra, Dean Martin and the Rat Pack at the Five, Sammy Davis, Jr. at the Club Harlem and the Beatles at Steel Pier, it would have been a blast, but the fates intervened.

The deal for the '64 convention coming to Atlantic City was sealed when Frank Sinatra and Sam Giancana, through Skinny D'Amato, owner of Atlantic City's 500 Club, helped swing the West Virginia Democratic primary in Kennedy's favor, defeating Hubert Humphrey, thus ensuring him the party's nomination on the first ballot at the 1960 Democratic Convention in Los Angeles.

Sinatra contributed his song "High Hopes," which became Kennedy's official campaign song, while Skinny helped Kennedy by greasing the West Virginia Sheriff's association, who held their annual meeting in Atlantic City. Then Sam Giancana, the Chicago mob boss, at the request of Sinatra and Old Man Joe Kennedy, is said to have gotten the dead to vote for Kennedy in the general election, which JFK won by only a few hundred thousand votes, the closest election ever.

Kennedy asked Sinatra to make the entertainment arrangements for his Inaugural Ball in Washington, and Sinatra began making plans for the re-nomination party at the 1964 Democratic National Convention, which was to be held in Atlantic City. 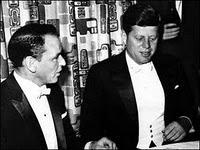 Frank and Jack at the Inaugural Ball

The Inaugural Ball was a smashing affair, but a lot happened in the aftermath, as JFK appointed his brother Bobby Attorney General, and RFK had his Justice Department go after organized crime, especially targeting Sam Giancana and his mob associates - Johnny Rosselli, Carlos Marcello of New Orleans and Santo Traficante of Tampa and Havana, Cuba.

And a lot of what happened had to do with Cuba as Fidel Castro's revolution finally succeed on New Year's eve 1959, and Castro began to eliminate the Havana gangster elements who ran the casinos under the corrupt Batista regime.

With the proceeds of profits made smuggling and bootlegging liquor during prohibition, the national syndicate of organized crime - led by the Commission, which was formed in Atlantic City in April 1929, had invested heavily in casino gambling in Las Vegas, Florida and Havana.

In 1958, after three decades of running Havana like Nucky Johnson ran Atlantic City, Lansky decided to bail out and cash in his chips, possibly leery of Fidel Castro's revolution. Lansky, the Syndicate's treasurer, sold his Hotel Nacional casino in Havana to Mike McLaney, one of JFK's golfing partners, and Carroll Rosenbloom, the owner of the Baltimore Colts NFL football team, who lived at the Jersey Shore in Margate.

John Martino, a Ducktown, Atlantic City bookie, became a casino security specialist who Santo Traficante sent to Havana to help run his casino, but Castro had Martino arrested as a spy, though most of the other gangsters got out with their shirts and whatever cash they could carry.

Sam Giancana had been involved with the CIA in the plots to kill Castro since 1959, when Eisenhower was president, and the gangsters thought their assistance in getting JFK elected and helping the CIA kill Castro would be enough to get them off the hook for any minor legal transgressions. But Attorney General RFK kept pursing them even though his brother, the president, was sharing a bed with mob moll Judith Campbell Exner, Sinatra and Giancana. Frank, Sam, Judy and Jack were all in bed together, both literally and figuratively.

Charles Ford, an Atlantic City native, was the CIA's middle man between the Kennedy brothers and the mobsters. Ford attended local high school and Princeton before becoming a CIA training officer, pulled from instructional chores to serve as RFK's CIA liaison with the mobsters during the CIA plots to get rid of Castro.

When John Martino finally got out of Cuban prison, exchanged with the Bay of Pigs veterans, he wrote a book, "I Was Castro's Prisoner," and for awhile became room mates with John Rosselli, who oversaw the mob's business in Los Angeles and Las Vegas and whose CIA case officer William Harvey, was known as "America's James Bond."

At the CIA's University of Miami's JMWAVE station Rosselli was known as "Colonel Rosselli" and ran one of the anti-Castro Cuban commando raider teams that was trying to kill Castro. One of the plots they hatched was to kill Castro with a high powered rifle from a  tall building while he rode in an open jeep, but then President Kennedy was killed in Dallas while riding in an open limousine through Dealey Plaza.

On the morning of November 22, 1963, John Martino told his wife that Kennedy would never leave Dallas alive, that he would be killed by a sniper and a patsy would be arrested to take the blame.

The following August, Kennedy's successor President Lyndon B. Johnson was paranoid. He knew that shortly after the Democratic convention, his hand picked commission would conclude that President Kennedy was killed by a lone assassin, and there was no conspiracy, but he was scared. LBJ was afraid that the still simmering sympathy for the slain president would lead to Robert F. Kennedy being spontaneously drafted as the Democrat Party's candidate, a distinct possibility at an open convention.

To make sure that didn't happen LBJ postponed the planned tribute to JFK until the end of the convention, after he was safely nominated, selecting Humbert Humphrey as his running mate. LBJ also had Bobby Kennedy's phone tapped and in order to avoid the bugs he suspected RFK or the FBI had placed in his own Atlantic City hotel room, he instead stayed at the Margate beach house of Carroll Rosenbloom.

While Rosenbloom may have lost his shirt in Havana when Castro confiscated his casino without compensation, he was a gambler and the side bets he had placed on LBJ had come up big.

Once LBJ had the nomination in hand, they showed a film depicting the Kennedy presidency and then RFK took the podium. After an extended twenty-two minute standing ovation RFK delivered a now famous speech in which he quoted a line from Shakespeare's Romeo and Juliet that the widow Jackie had written on a piece of paper and slipped to him. "When he shall die, take him and cut him out in little starts, and he will make the face of heaven so fine and all the world will be in love with night, and pay no worship to the garish sun."

The week of the convention Sinatra kept his end of the deal and appeared at Skinny D'Amato's 500 Club, but it just wasn't the way they planned it. 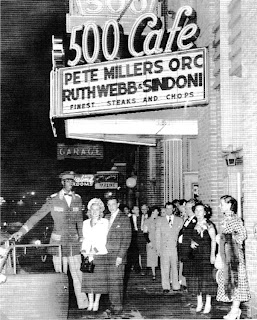 Skinny and his wife outside the FIVE. Bandleader Pete Miller's son Pete Miller is the Margate literary agent for Vincent Bugliosi, whose book on the Kennedy assassination is being made into a Tom Hanks film "Parkland."


For Atlantic City the 1964 Democratic Convention was a public relations disaster, as the national press corps and international radio and TV journalists reported on the true state of Atlantic City - America's Playground was the pits. Just as the Kennedy-Sinatra relationship had "high hopes,' but went sour after the election, Atlantic City was not the same place it was in it's hey days, when all of the boardwalk hotels were first class establishments and all the guests were treated royally. By the early 1960s the old hotels were falling apart, with pealing paint, broken plumbing, electric lights that didn't work and employees who treated the guests shabbily, like Shoebes.

Although it would take another decade, the sad state of affairs on the boardwalk eventually led to the casino gambling legislation that would level most of the old hotels and in their place build modern hotel casinos that would reinvigorate Atlantic City into another era.

Today, the bust of JFK at Kennedy Plaza is about the only historical remnant left to remind us of that time and place, what might have been had JFK lived and Camelot came to Atlantic City. 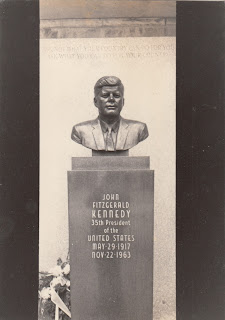 1) JFK confers with Skinny D'Amato during the 1960 election campaign in Camden County.

2) Frank and Jack at the Inagural Ball in Washington.

3) Skinny and his wife outside the 500 Club. House band leader Pete Miller's son Peter is the New York literary agent for Vincent Bugliosi, whose book "Reclaiming History" is being made into a Tom Hanks movie "Parkland."

4)  JFK Bust at Kennedy Plaza, in front of Boardwalk Hall

Bill, what do you think of Antony Summer's Sinatra bio where he definitively links Sinatra to the Sicilian mob. In fact right down to the Sicilian town's street where the Sinatra's lived with Luck Luciano's family as neighbors.

Tony Summers is the Best in my book. Whatever he says goes. He's also written other important books on Hoover, M. Monroe, JFK assassination and 9-11