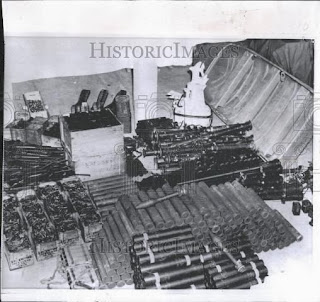 Since the source of the bullets said to be used in the assassination of President Kennedy have never been identified, I would suggest they came from one of three known arms caches.

Like cigarettes, you can’t buy individual bullets but must purchase them in packs and cases that are labeled and can be traced. The bullets and shells found at the Texas School Book Depository were traced from their serial numbers to a case of bullets sold to the US Marine Corps in 1954, and because the USMC does not have a weapon that could fire that caliber of bullets, it is presumed they were to be used during a covert intelligence operation, possibly in Guatemala or Iran.

There are a number of guns and arms caches that come into play in the JFK assassination drama;

1)      The Houma Bunker raid – that took place in the summer of 1961 in New Orleans when Oswald was in USSR. It included David Ferrie, Sergio Aracha Smith, Gordon Novel, his wife – Marlene Mancuso – a former Miss New Orleans beauty, Luis Rabel Nunez, Layton Martins, Carlos Quiroga, Andrew Blackmon and others. They broke into, or were given the key to an underground arms bunker in Houma, La., a property owned by the Schulemburger, a French company headed by Jean deMenil, who met Oswald when he returned to Texas. The arms were taken to Guy Bannister’s 544 Camp Street offices and David Ferrie’s apartment, and were said to be used for anti-Castro Cuban operations or the OAS French Generals revolt against deGaul for his Algeria policies.

2)      The U-Haul trailer filled with guns and arms William Harvey and the CIA provided to John Rosselli for his team of anti-Castro Cuban commandos who were attempting to infiltrate Cuba to kill Castro.
https://spartacus-educational.com/JFKroselli.htm

In February, 1963, William Harvey was removed as head of the ZR/RIFLE project. Harvey was now sent to Italy where he became Chief of Station in Rome. Harvey was convinced that Robert Kennedy had been responsible for his demotion. A friend of Harvey's said that he "hated Bobby Kennedy's guts with a purple passion".

Harvey continued to keep in contact with Johnny Roselli. According to Richard D. Mahoney: "On April 8, Rosselli flew to New York to meet with Bill Harvey. A week later, the two men met again in Miami to discuss the plot in greater detail... On April 21 he (Harvey) flew from Washington to deliver four poison pills directly to Rosselli, who got them to Tony Varona and hence to Havana. That same evening, Harvey and Ted Shackley, the chief of the CIA's south Florida base, drove a U-Haul truck filled with the requested arms through the rain to a deserted parking lot in Miami. They got out and handed the keys to Rosselli." 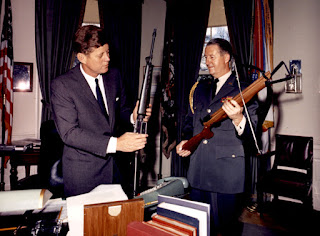 3)      The Venezulian Arms Cache found on a Venezuelian beach, the last major issue JFK delt with in the Oval Office before leaving on his trip to Texas. The CIA director himself took a weapon from the cache into the Oval Office and there’s a photo of JFK being shown the weapon, that the CIA falsely claimed originated from Cuba and bound for communist guerillas in Venezuela.

David Talbot “Brothers”:  “On November 19, three days before the assassination, President Kennedy was starteled when Richard Helms opened a canvas air bag in the Oval Office and pulled out a submachine gun. The weapon Helms claimed, was part of a Cuban cache that had been found on a beach in Venezuela – dramatic proof of Castro’s brazen effort to subvert his neighbors’ governments. Helm’s message was all to predictable; it was time to get rid of Castro. But Kennedy seemed more disturbed by the fact that the CIA official had been able to blithely slip an automatic weapon into the Oval Office unmolested by his Secret Service centurions. “It gives me a feeling of confidence,” he dryly told Helms.”