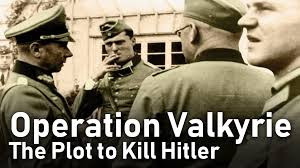 Seventy-five years after the July 20, 1944 assassination and coup attempt against Adolph Hitler failed, the repercussions are still being felt, resonating in the halls and offices of the CIA and NARA - the National Archives and Records Administration - where key records on these events are missing, presumed destroyed and being wrongfully and possibly illegally withheld.

These records are key historic documents not only because of their association with the July 20, 1944 "Valkyrie" plot to kill Hitler, but because of it's close and still unraveling connection to the CIA-Mafia plots to kill Castro and the assassination of President Kennedy.

The search for these key documents begins with a military memorandum - the minutes of a meeting of the Joint Chiefs of Staff who were briefed by the CIA's Desmond FitzGerald concerning the CIA's covert intelligence operations against Cuba, and the military support necessary for the success of those operations.

FitzGerald was the head of the CIA's Task Force W - originally established by William Harvey when he returned from Germany after organizing the infamous Berlin Tunnel.

The minutes of the meeting, released under the JFK Act of 1992, were composed by Colonel Higgins, adjunct to General "Brute" Krulak  (USMC), then responsible for all military support to CIA covert operations - especially those directed against Cuba.

According to the Higgins' memo, FitzGerald told the Joint Chiefs that the CIA, in the course of its psychological operations, had made a "detailed study" of the July 20, 1944 plot by disenchanted military officers on Hitler that was being used against Fidel Castro.

Higgins' report only mentions this in one of over a dozen bullet points discussed, and other items are of interest, including LeMay's review of a radio intervention plan, and the security program for the Cuban project.

Higgins' report is important on a number of levels, as he was responsible for Krulak's military support of the CIA's covert intelligence operations against Cuba, and that is what he focused on.

Krulak knew JFK, as he was the commander of a US Marine unit that Lt. Kennedy and PT 109 rescued off a Japanese held island in the South Pacific, an incident portrayed in the movie PT 109.

Krulak later said that he promised Kennedy a bottle of whiskey for his efforts, but didn't make good on the promise until he was appointed to the Pentagon to provide assistance to the CIA covert ops.

According to Krulak's account, from someone who isn't inclined to exagerate, Krulak says he visited the President in the Oval Office, off duty, late one night and gave him the promised bottle of whiskey, that they shared in an event that is not documented by the White House records, though it is known ant JFK did entertain after hours, so it is likely to be true.

In any case, it was Krulak's deputy - Colonel Higgins, who wrote the minutes memo that reports FitsGerald's "detailed study" of the July 20, 1944 failed assassination attempt on Hitler that the CIA was to use against Castro.

The date of the meeting is significant  - September 25, 1963 in that it is also a date that many moves are made on the Devil's Chessboard - Ruth Paine picks up Marina and the rifle in New Orleans and drives them to Texas while Oswald leaves for Mexico. There are a half-dozen incidents that are worth reviewing that occur on these dates - Sept. 23-25, 1963, that are worth reviewing, and we will.

That is when Ruth Paine left the rural Philadelphia farm of Arthur Young and his wife - Michael Paine's mother - Ruth Forbes Paine Young, drove to New Orleans, picked up Marina and the rifle, and drove them to Texas while Oswald went to Mexico.

Arthur Young was the inventor of the Bell Helicopter - and arranged for his step son Michael to work at the Texas plant as a designer, while Ruth Forbes Paine Young was a close personal friend of Mary Bancroft - Allen Dulles' OSS secretary and assistant, both very much involved in the July 20, 1944 plot.

JFK then left DC on his "Conservation Tour," with a first stop in Northeast Pennsylvania with Mary Pinchot Meyer, to meet her mother, who had donated land to the National Parks Service. Mary was the separated wife of Cord Meyer, Allen Dulles' former deputy and head of the CIA's International Organizations Division. Cord Meyer's father was an early aviation pioneer and co-founder of the Civil Air Patrol (CAP), to which Lee Harvey Oswald belonged when he lived in New Orleans.

It is also the date when Richard Case Nagell - who Dick Russell called "The Man Who Knew Too Much" entered a Texas bank, fired a round into the ceiling and waited to be arrested, saying that he wanted to be in federal custody when JFK was killed.

So there was a lot of movement taking place on the "Devil's Chessboard," as David Talbot puts it.

DC FOIA attorneys Jim Lesar and Dan Alcorn filed a FOIA request for the CIA's "Detailed Study" of the July 20, 1944 plot to kill Hitler and adapt it for use against Castro, but the CIA,  at first, claimed they had no records of the study, then came up with a single reference to it in a propaganda sheet that claimed that communists helped thwart the plot.

In any case, while the CIA seems to have lost its study of the event, we can certainly look at it closely and see how they could have adapted it for use against Castro.

For starters, it was a plan - not a plot - a plan devised by disenchanted high level German military officers, a continuity of government plan - code named "Valkyrie" - one that was written by Col. Claus von Saufenberg, designed to have the German Home Guard (ala the National Guard) to take over key government and communications buildings in major cities if there was a national catastrophe - a revolt by the millions of foreign slave laborers was the example given, and accepted. As Hitler himself signed off on the Valkyrie plan.

Dulles and Bancroft were involved because of their association with German military officers Hans Bern Gisivious, who was one of the few key participants to escape and avoid execution when the bomb that von Staufenberg planted next to Hitler failed to kill him.

Gisivious hid out in a friend's basement for a few weeks until Dulles and Bancroft could provide him with a forged passport, papers and a train ticket out of Germany that he used to successfully escape. After the war Bancroft assisted Gisivious in writing his history of the Third Reich. Gisivious testified at Nurenberg, and sent a few Nazis to the gallows, and moved in to the home of CIA officer Tom Braden, whose book "Eight is Enough" is about his large family that lived next door to RFK. Gisivious then moved to Texas where he obtained a job at Texas Instruments.

While the CIA couldn't find any records of the July 20, 1944 "Valkyrie" plan to kill Hitler, a DC newspaper reported that on July 20, 1954 Allen Dulles, then CIA director, had lunch with Gisivious, celebrating their failed but adventurous exploits.

In looking at the CIA covert operations against Castro and Cuba, it is apparent that they did use some of the Valkyrie plans - including attempting to develop contacts within the Cuban military to locate disenchanted officers who might be encouraged to assassinate Castro and support a coup. Among them they recruited Dr. Rolando Cubella (AMLASH), a founder of the DRE at the University of Havana, who took over Batista's office when he fled Cuba on January 1, 1959, sitting in his chair and smoking his cigars.

When Castro entered Havana however, rather than take over Batista's office, he set up shop in the Penthouse of the Havana Hilton, where he was treated well by the manager - Col. "Brandy," - a US Army Intelligence officer who was assigned to the Dallas 488th unit but reported directly to the Assistant Chief of Staff for Intelligence (ACSI) at the Pentagon, an office that comes into frequent play in this drama.

While AMLASH's bonafides were questioned by some CIA officers, Cubella met with the CIA on a number of occasions, including one in Brazil where he was encouraged to kill Castro. The very next day Castro visited a reception at the Brazilian embassy and gave an AP reporter an exclusive interview, complaining about the CIA's support of commando raids against Cuban economic targets, and said that if American leaders threatened to kill him they themselves would not be safe.

And that was certainly true as Cubella was meeting with a CIA officer in Paris on November 22, 1963, requesting a high powered rifle to use to kill Castro at precisely the same moment JFK was killed in Dallas.

And it was Cubella who reportedly owned an apartment in Veradero near the DuPont estate that was to be used as a staging area for the Pathfinder attack on Castro - using a high powered rifle as he rode by in an open jeep.

There are five aspects of the Valkyrie plan to kill Hitler that was to be adapted for use against Castro, but instead redirected to JFK in Texas.

For starters, while the CIA had a hard time identifying disenchanted Cuban military officers, there was no shortage of them among the American military ranks - especially the Joint Chiefs of Staff, all of whom were at odds with the President.

Another aspect of the July 20 plan that can be seen at Dealey Plaza is the use of the Army - ACSI - Army Reserves - National Guard - as many of the Dallas police were also Army Reservists, some with the 488th Intelligence unit controlled by Col. Jack Crichton. Crichton ran the Dallas Emergency Communications bunker, arranged for a translator for Marina Oswald and had key personnel in the motorcade's pilot car - including Deputy Chief Lumpkin and Colonel Whitmeyer, head of all Army Reserve units in North Texas.

Lumpkin was the Dallas police officer who, with Texas School Book Depository superintendent Roy Truly - gave homicide chief Capt Fritz, Oswald's address at Ruth Paine's Irving home, and were the first to call attention to Oswald as a suspect.

Yet another part of the Valkyrie plan that was used at Dealey Plaza was to blame the crime on a communist - as both Oswald and Castro were set up to take the fall for the crime, except LBJ decided that it would be better to blame a lone nut rather than a communist conspiracy that could lead to nuclear war. That was the excuse he used to instruct Texas authorities not to charge Oswald with "furthering a communist conspiracy" as they were about to do, and the excuse he used to convince Earl Warren to head the commission that had to determine one man alone was responsible for the assassination.

So the July 20, 1944 plan to kill Hitler and take over the German government was studied in detail by the CIA to use against Castro, a study they have since lost, but we can see for ourselves how it was used, not against Castro, but against President Kennedy.

And not speculated by me, it has been suggested that former Nazi rocket scientists - W. von Braun, responsible for the Saturn rocket and moon landing, picked the date July 20 - for the manned moon landing because of its association with the attack on Hitler. Though I doubt that is true, I know that von Braun and his assistant Gen. Dornberger, must have thought about the date and the coincidence - and talked about it, and while I have no record of such a discussion, I am confident it did occur.


[BK Notes: This is a work in progress, an on-going study that will be continually updated. I am using the 75th Anniversary of the Valkyrie coup to summarize much of my research in the past few years in regards to Valkyrie and Pathfinder at Dealey Plaza,, and though it will be rehash for those who have been reading JFKCountercoup for awhile, this is the most recent version, updated with the latest research.]

Thank you for supporting this work.