KELLY NOTES: I first heard of I.W. Harper from Gene Wheaton, and subsequently found a photo of him in Soldier of Fortune from the 1980s when he was training the Contras to fight the Sandinistas in Nicaragua. That article identified him as the "legendary" I.W. Harper, and I have since learned that he was indeed a legend in the CIA training corps as a weapons and explosives expert. While his career is long and vast, I was only interested in his role training the Cubans for the Bay of Pigs and his subsequent training of the Pathfinders at JMWAVE. I had found his address in Texas and was preparing to travel there to interview him, but unfortunately his family informed me that he has passed away. They do however, have videotaped interviews with him and Soldier of Fortune may do another article on him in the spring. Many thanks to I.W.'s grandson Patrick Harper for reading my blog and sharing these insights. 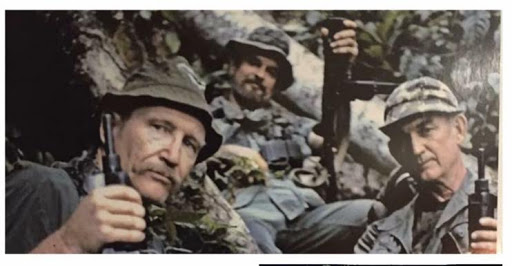 I.W. Harper (right) with Contras in Central America in 1980s

John Henry “I.W.” Harper of Ellicott, Colorado passed away at the age of 90 years on Wednesday Oct. 21st, 2020 after a long battle with cancer.

I.W. is survived by his wife of 71 years Eula May (Lou) Harper and three of their children; Linda M. Hunt, Deborah A. Bentley, and Gary W. Harper.  He also leaves behind eight grandchildren: Michael & Douglas Bentley, Eric & Brian Hunt, Holly Gilliam, and Christopher, Patrick & Garrett Harper. I.W. was predeceased by his four siblings, and two of his children: John W. Harper and Susan L. Harper.

I.W. was born to Lonnie and Holly Harper on the 21st of April 1930, in Dry Creek, Louisiana. He grew up on a family farm in Dry Creek. In 1947 at the age of 17 years old, he enlisted in the United States Navy as an Aviation Support Equipment Technician (AS). While stationed in Arlington, VA with the Office of Naval Intelligence, he met Lou. They married on August 2, 1949.

Upon exiting the Navy, I.W. applied for a position at the recently established Central Intelligence Agency and was accepted in the Office of Logistics. After formal training, he was designated as a Weapons and Explosives Expert. I.W. began his extensive 23-year career with the CIA on Saipan in 1952; and completed it as one of the last Americans to evacuate Saigon in 1975. His career involved assignments throughout the world; taking his family to Saipan, Libya, Okinawa, Miami, Greece, Iran, Laos, Cambodia, Vietnam, and Jordan. I.W. was awarded the CIA’s Intelligence Medal of Merit for voluntarily remaining to assist evacuations of US, third country national, and South Vietnamese personnel out of an unnamed site, as well as Saigon, under enemy rocket and artillery fire.

After retiring from the CIA, I.W. acquired a family owned sporting goods store named Ed’s Bait & Tackle in Fairfax, VA. The business operated from 1978 until 1991. During this period, he was recruited for and conducted various clandestine actions in Latin and South America. In the early 1990s, I.W. returned to Cambodia with the United Nations as an advisor to an explosive ordnance disposal program that cleared large swaths of previously mine-ridden areas.

In 2005, I.W.  and Lou bought 80 acres in Colorado next to their son and daughter-in-law Gary and Mary. I.W. spent the next 15 years operating a tree farm between his and Gary’s properties. Together with Gary, and his three grandsons, I.W. planted over 1500 trees.

I.W. was a 32nd Degree Scottish Rite Mason, as well as a Life Member of the Grand Lodge of Accepted and Free Masons of the Philippines.

A memorial service will be held in the Spring of 2021 at Pikes Peak National Cemetery in Colorado Springs.