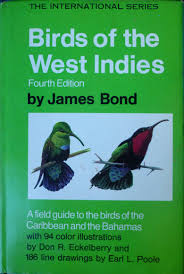 Most of the people of the civilized world are familiar with James Bond – the most famous spy in history, either from the 100 million books Ian Fleming wrote that were sold, or the literally billions of people who have seen the popular movies originally based on Fleming’s stories.

But few people know about the real James Bond, the Philadelphia ornithologist and author of the book “Birds of the West Indies.”

Jim Wright comes into the real James Bond story as a birdwatcher from Philadelphia, author of birding books – “The Nature of the Meadowlands,” “Jungle of the Maya” and “Hawk Mountain,” and birding columnist for the Bergen (NJ) Record, near were he currently lives.

Although it appears he has never met the real James Bond, he did do his research and quotes extensively from the published record, especially Mrs. Bond’s books “How 007 Really Got His Name,” and “Far Afield in the Caribbean,” as well as David Contesta’s official biography of James Bond, the former curator of Birds at the Philadelphia Academy of Natural Sciences and author of the books “Birds of the West Indies” and “Field Guide to the Birds of the West Indies.”

It just so happened that English author Ian Fleming, vacationing at his Jamaican beach house he called Goldeneye, kept a copy of “Birds of the West Indies” on his breakfast table, and when it came time for him to sit down and write the “spy story to end all spy stories,” which was to be “Casino Royale,” he took the name of the author of the book in front of him – James Bond, for his spy, who also has the moniker Double-O-Seven.

While there are many real life spies who they say were used to develop the character of 007, including Dusko Popov, Canadian Sir William Stephenson (INTREPID), Ian Fleming’s brother Peter – and Fleming himself, there is only one real James Bond, whose name is James Bond, the author of the book “Birds of the West Indies.”

I came into the story from a different direction – having read a Philadelphia Magazine article on the assassination of President Kennedy written by Michael Marlow that mentioned a man named Cummins Catherwood, and his Catherwood Foundation, though his connection to the assassination was not spelled out. I did however, notice in the book “The Invisible Government” by David Wise and Thomas Ross, that Catherwood’s Foundation was listed as a footnote among other similar foundations that were used by the CIA to secretly dispurse money for its covert operations.

So I did what I usually do when I come across a new name, and went to the Philadelphia Bulletin newspaper archives, also called the morgue, and looked up Catherwood’s newspaper clips. The Bulletin paid dozens of women to clip every article of every edition of their paper, circling each name and putting the clipping that referred to that person in an envelop with his name on it and filed it away.

Catherwood’s envelope was quite thick, and as I sat and read it the CIA connections were readily apparent – the funding of the Cuban Aide Relief to assist professional Cubans who escaped Castro’s Cuba, support for the Russian Orthodox Church Outside Russia, a trip as a tourist to Soviet Russia, and the construction of a large sailing yacht, “The Vigilant.”

Then I came across an interesting article about how Catherwood sailed the Vigilant down to the Caribbean with four scientists aboard, including James Bond, “whose main interest is birds.”

For a moment I thought it was a joke, a CIA operative with Catherwood was using the alias of James Bond, but then I looked at the date – 1948 – years before Ian Fleming began writing his 007 books. I then went over to the Bulletin file and looked under Bond, James, and came across a much thinner envelop with articles about Bond, his book “Birds of the West Indies,” and his wife Mary Wickham, who wrote the book “How 007 Really Got His Name.”

When I got a copy of “Birds of the West Indies,” I took it up to the Bond’s apartment at Hill House in Chestnut Hill, adjacent to the train station and knocked on their door. Mrs. Bond answered and when I showed her the book and asked to have it signed by Mr. Bond she called out, “Jimmy, there’s a young man here to see you.”

Jimmy? I thought. Yes, James Bond is very American, and he appeared appropriately in a tux, as the Bonds were getting ready to go to a social ball. He graciously signed my book, and asked me to come back sometime to talk, and I did return a number of times and had pleasant conversations with him, some of which I recount in my yet unpublished manuscript – “The Mystery of Goldeneye – James Bond and Ian Fleming – The Men and the Myth,” and blog – James Bond Authenticus.

In Chapter 009, Wright notes: that John Pearson’s fictional “James Bond: The Authorized Biography of 007,” that “posited that Fleming’s real purpose in writing the 007 stories was to make his fictional Bond such a comic-book superhero that the Russians would fail to take the real Bond seriously, thereby allowing him to continue his secret work. Other theorists – notably William Kelly in his blog James Bond Authenticus – have explored that possibility, combing through Bond’s career and Mary’s memories for clues pointing to a life of espionage. Could it have been possible?”

Wright mentions a few of the clues – Bond attended St. Paul’s School, that provided numerous OSS agents during World War II, and Cambridge Trinity College, home of the Cambridge spy ring, and was a member of the Pitt Club, a hunting and dining club that also included Sir Anthony Blunt and Guy Burgess, two of the most notorious double agents of our time. He neglects to mention Bond’s voyage on a ship with Somerset Maughan, an important literary figure and British Intelligence agent, his trip with CIA bagman Cumming Catherwood, his birding tour of the Bay of Pigs shortly before the CIA invasion and numerous other cluesq.

But my hypothesis is not just to theorize on whether the real James Bond was a spy, though there’s much evidence of it, but that most if not all of the fictional characters Fleming writes about are based on real people known to Fleming – including Bond, 007’s CIA sidekick Felix Leiter, Quarrel the Cayman islander, “M” and “Q,” Pussy Galore, even Catherwood himself is parodied in one of Fleming’s short stories.

At first I was a bit leery about Wright’s book, as I was familiar with the previously published literature, and was afraid Jim Wright would have easily appropriated some of my work much as Fleming had appropriated the name for his secret agent from James Bond. But no worries, Wright puts together a very detailed and photographically illustrated biography of the real Bond, but he doesn’t appropriate any of my work, so I still have a chance of getting published some day.

The closest my manuscript came to getting published was when an editor for Turner Books in Atlanta called to say they were going to discuss publishing my manuscript at a board meeting that day, but I was later informed that when the subject came up it was dismissed because they had already agreed to publish Andrew Lycette’s second official biography of Ian Fleming (after John Pearson), and the Lycette’s book and mine would clash.

The one good thing that Jim Wright’s book “The Real James Bond” does is put to rest the false impression given by both official biographies of Ian Fleming – that the real James Bond took the whole thing as a joke, when in fact he deeply resented the invasion of his privacy and the problems that the whole 007 phenomenon caused him.

As Wright puts it, "....The tale of Ian Fleming and the real James Bond has developed a life of its own, gradually accumulating embellishments and inaccuracies - beginning with the oft-repeated assertion that Bond gave Fleming permission to take his name and that Bond enjoyed the fame. In fact, Bond grew to hate the 007 connection even as his wife, Mary, did her best to promote it. And although the appropriation of his identity caught Bond by surprise, there is a long tradition of ornithologist spies - including at least seven of his contemporaries. Some people have even speculated that the real James Bond was a spy as well."

When they finally met at Goldeneye, in February 1964, six months before Fleming's death, Bond told him right off, "'I don't read your books. My wife reads them, but I never do.' I didn't want to fly under false colors." To which Fleming responded, "I don't blame you."

The problems included lonely girls finding his name in the public phone book and calling him at all hours of the night. It also made it hard getting across borders with the three main tools of his trade - shotgun for shooting bird specimens, scalpel for cleaning them, and arsenic for curing them. The 290 bird specimens he collected over the decades are now enshrined at the Philadelphia Academy of Natural Sciences, where he was curator of Birds.

Wright’s chapter on whether the real James Bond was a spy skips over all of the evidence I had uncovered, but it does get a response from the CIA on the question. Michael Lavergne, the CIA’s information and policy coordinator, wrote a response to Wright's Freedom of Information Act request:

“After conducting a search reasonably calculated to uncover all relevant documents, we did not locate any responsive records that would reveal an openly acknowledge CIA affiliation with the subject. To the extent your request also seeks records that would reveal a classified association between the CIA and the subject, if any exist, we can neither confirm or deny having such records, pursuant to Section 3.6(a) of Executive Order 13526, as amended. If a classified association between the subject and this organization were to exist, records revealing such a relationship would be properly classified and require continued safeguards against unauthorized disclosure.”

So if James Bond was a real CIA operative they wouldn't tell you anyway.

Jim Wright’s book is a clear, concise, and graphic portrait of James Bond, American ornithologist, from whom Ian Fleming appropriated the name for his secret agent 007. While those billions of people who are thrilled with the stories and movies will probably not be interested in him, the real James Bond did live a life even more interesting than the fictional 007. Those naturalists interested in birds, and real 007 aficionados will find this book fascinating, especially since the other published works on the subject are out of print or hard to find.

With the recent death of Sean Connery, and the impending release of the next 007 film, this book is timed right, and I hope people read it and enjoy the story, as it gives life to the possibility of my manuscript - The Mystery of Goldeneye - James Bond and Ian Fleming - the Men and the Myth, will eventually be published someday. 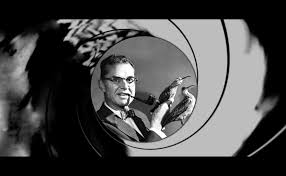 Fascinating Story Bill. The real spies are not agents. Agents keep the secrets. The real spies have other work which allows them to spy in secret. I think your book will get published. Happy New year!

Thanks for writing about my book...

Please email me at wrightjamesb(at)gmail.com

Jim, I don't want to change email but thought you might find my story interesting too.

“I arise in the morning torn between a desire to save the world and a desire to
savor the world.”This makes it hard to plan the day.
-E.B. White