How Lee met Marina - Was it arranged by the KGB?

How Lee met Marina – Was it arranged by the KGB?

When lovers get married there’s always a story of how they met, and one of the more fascinating and lengthy chapters in Ernst Titovets Oswald: Russian Episode comes rather late in the book – Part IV, Chapter 24 – Lee Meets His Future Wife.

According to Oswald’s “Historic Diary,” and Marina’s version of their meeting in Priscilla Johnson McMillan’s “Lee and Marina,” they met quite coincidently on the dance floor at a Trade Hall dance.

Titovets explains that it wasn’t just dance, but a March 17th 1961 – St. Patrick’s Day reception after an exclusive lecture by a prestigious professor, Dr. Lydia Cherkisova, a delegate to the XV UN session in New York where she hobnobbed with Chairman Nakita Khrushchev and crossed paths with Sen. John F. Kennedy. It was the celebrated occasion when Khrushchev gave his “We will bury you!” rant while banging his shoe.

While Titovets was there and provided Oswald with a ticket to the exclusive affair, in talking with others who were present at the time Oswald met Marina, he has put together a more detailed account that seems to indicate it maybe wasn’t such a haphazard coincidence after all.

Professor Cherkasova was chair of the Department of Biochemistry at Belorussian State University and head of the Radiation Research Lab a the Academy of Science, where she did classified research on developing a means of radiation protection for the civilian population after a nuclear attack. Her work was conduced at the Institue of Nuclear Research at the Sosny reactor.

Titovits knew her as he was occasionally requested to serve as a translator for her, and he has been to her luxurious apartment she shared with her husband, and son Yuri Merezhinski.

The site of the affair was the Trade Union Palace on Central Square, a grand architecturally ornate building, but Titovets was more interested in the dance and reception than what he considered would be a boring political lecture, so he skipped the lecture to wander around the building and enjoy some of the champagne, vodka and caviar served at the snack bar. Marina too skipped the lecture and arrived at the dance late.

But from interviews with Professor Cherkasova, her son Yuri, and his good friend Kosta Bandarin, Titovits has put together a more concise scenario of what actually occurred.

Oswald must have met Titovets at some point prior to the lecture because he was seen escorting Oswald back stage and into the orchestra pit, where he was to put photos from New York into a projector during his mother’s lecture. Oswald assisted him.

Titovets returned after the lecture was over and while mingling with some girls on the dance floor, Oswald approached him and fervently asked him to translate to a girl he had met and was infatuation with – Marina Prussakova. Oswald wanted Titovets to tell her he wanted her address and phone number, which she provided.

Oswald then danced with Marina and said he wanted to escort her home, even though she was with another suitor Sasha Perskaren, so Titovets went his own way.

Both Yuri and Kosta admitted knowing Marina from when she lived in Leningrad, where her uncle was an officer in military intelligence. Both admitted being intimate with Marina, and introducing her to Oswald, because they were tired of her.

After the dance was over Yuri invited them all back to his apartment and he was accompanied there by Marina, Sasha, Kosta and Oswald. They were served wine by Professor Cherkasova. While Oswald was aware of her secret radiation research, he expressed a profound disinterest, but did ask questions about her visit to New York, where he once resided. 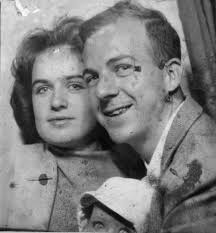 Titovets became suspicious of parts of this story when Yuri told him Oswald came into the orchestra pit unannounced, introduced himself as an American ex-Marine who had slit his wrists in order to stay in the country. But Sasha saw Titovets escort Oswald there.

Titovets disbelieved Titovets story that Oswald introduced himself and told him he slit his wrist because Oswald never told anyone that he had slit his wrist, and would certainly not tell a stranger. Oswald even refused to tell Marina, after he was married, when she asked him about the scar.

Though it was well known that Marina had lived in Leninigrad, a more lively and cultural center than Minsk, Yuri said she left under a cloud, “deported” for being a prostitute. Yuri said Marina’s hobby was sex.

While we know of Marina’s pre-assassination dalliances with George deMohrenschildt, and post assassination affair with Mr. Martin, the manager of the Inn of the Six Flags, where the Secret Service had Marina and the children hold up, I would say she was more promiscuous than a prostitute, doing it for enjoyment, not money.

After a very brief courtship, Oswald and Marina were married.

Titovets writes: As for Marina, her marriage to an American seemed to have been something she had long looked forward to. She was known to involve herself with foreigners while still in Leningrad – the cause of her departure from the city and the reason for her falling under KGB surveillance.”

One of the foreigners she was apparently involved with in Leningrad was another American defector, Robert Webster, an executive with the Rand Corporation.

Marina said she didn’t know Oswald was an American, but Yuri said he told her so before introducing them.

Titivets learned that Yuri’s friend Kosta collected pornography, something that, when the KGB learned of it, was used to blackmail him into spying on and keeping them informed on Oswald.

One Soviet document refers to Marina as a “sparrow,” women the KGB used as a sexual lure.

So Professor Cherkasova, as a research scientist and party delegate, worked closely with the KGB, who she referred to as “those black colonels.” Kostya was blackmailed into spying on Oswald, whose apartment was bugged by the KGB. Marina didn’t want it known that she knew Oswald was an American. Yuri lied about how he met Oswald and how he slit his wrist, information he could have only acquired from the KGB. And neither Marina nor Oswald bother to mention Professor Cherkasova, Yuri, Sasha or Kostya, key players in the story of how they met, intentionally left out.

Titovets puts all of this together and wonders, “Could it be that the meeting between Lee and Marina was masterminded and choreographed by the KGB in view of the fact that it is unlikely that this meeting was just a play of Fate?”

“Taking into account that the KGB controlled Kostya Bandarin, one might envision a scenario where he was asked to facilitate Oswald’s courting of Marina. So his story about him and Yuri being bored with Marina and dumping her on Oswald would just be a cover story.”

“The logic of the intelligence people behind the Marina and Lee affair must have been that the events should, with some degree of orchestration, apparently proceed their natural way. The fewer people were aware of the whole scheme and the final objective, the better. At the same time there might be one person at an initial key point instructed by the KGB about his or her actions to make the plan work the right way. Yuri fits this role best.”

“Oswald was unattached at the time. To get him deeply involved with a pretty girl that the KGB might have had control over was a potential way to obtain a string to pull at him. It might serve as a means of obtaining valuable information about the American since men in love are prone to share their secrets and innermost thought with the beloved one.” 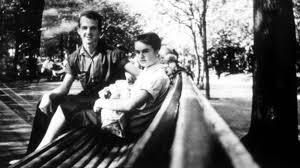