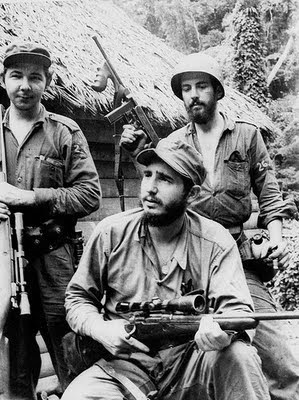 LIST B:
Black Propaganda Operations affiliated with the Assassination of JFK, mainly designed to falsely implicate Castro in the assassination:

1) A leaflet was distributed to the Florida Cuban community in November, 1963 that warned of an “Act of God” that would put a “Texan in the White House.”

2) Lee Harvey Oswald’s Fair Play for Cuba Committee activities in New Orleans in the summer of 1963.

3) Oswald’s visit to the Cuban and Russian embassies in Mexico City in Sept., 1963.

4) The photographs of Oswald brandishing a rifle and pistol and copies of two leftest but contradictory magazines in his back yard.

5) The last two issues President Kennedy dealt with before leaving the White House for Texas concerned his backchannel negotiations with Fidel Castro at the UN and the discovery of a cache of weapons in Venezuela that appeared to have come from Cuba. The weapons story was later discovered to be over a year old and planted by the CIA to falsely implicate Cuba.

6) Julio Fernandez, one of three anti-Castro Cubans whose boat was financially supported by Clair Booth Luce, called Luce, wife of the publisher of Time-Life on the evening of the assassination to report information on Oswald’s activities in New Orleans. Fernandez, a former Cuban publisher, was married to an attorney who worked for Catholic Welfare Services in Miami.

7) In Miami, shortly after the assassination, Dr. Jose Ignorzio, the chief of clinical psychology for the Catholic Welfare Services, contacted the White House to inform the new administration that Oswald had met directly with Cuban ambassador Armas in Mexico.

8) In Mexico City, David Atlee Philips of the CIA debriefed a Nicaraguan intelligence officer, code named “D,” who claimed to have seen Oswald take money from a Cuban at the Cuban embassy.

9) In New Zealand, U.S.A.F. Col. Fletcher Prouty read complete biographies of Oswald in the local papers hours after the assassination, indicating to him that a bio of Oswald was pre-prepared.

10) Brothers Jerry and James Buchanan, CIA propaganda assets, began promoting the Castro-did-it theme immediately. According to Donald Freed and Jeff Cohen (in Liberation Magazine), the source of the Buchanan’s tales was the leader of the CIA supported International Anti-Communist Brigade (IAB). “Back in Miami,” they wrote, “a high powered propaganda machine was cranking out stories that Oswald was a Cuban agent…” Sturgis is quoted in the Pampara Beach Sun-Sentinel as saying that Oswald had talked with Cuban G-2 agents and fracassed with IAB members in Miami in 1962.

12) The same “propaganda machine” was still pumping out the same lines in 1976 when Gaeton Fonzi interviewed Sturgis, who said that he had recently ran into a friend who worked for the “company” who reminded him of an incident he had completely forgotten about. Sturgis suddenly recalled, “that he had heard about a meeting in Havana about two months before the Kennedy assassination. At the meeting there were a number of high-ranking men, including Castro, hs brother Raul, Ramiro Valdez, the chief of Cuban intelligence, Che Guevara and his secretary Tanya, another Cuban officer, an American known as ‘El Mexicano,’ and,…oh, yea; Jack Ruby. And the meeting dealt with plotting the assassination of President Kennedy.”

13) Seith Kantor, a Scripps-Howard News Service Reporter in Dallas during the assassination, couldn’t understand why his telephone call records from Parkland Hospital were being withheld because “disclosure would reveal confidential source of information.” When Kantor checked his own records he discovered his editor had told him to call another reporter in Florida or some deep background on Oswald. The reporter in Florida had everything on Oswald, FPFCC, Russian defection, New Orleans radio debate, etc., but instead of using it himself, fed it to Kantor. The reporter was Hal “the Spook” Hendrix, who won the Pulitzer Prize for his coverage of the Cuban Missile Crisis and earned his nickname when he “reported” on the Dominican Republic Coup on September 24, 1963, the day before it happened. His CIA affiliations became better known when he went to work for ITT in Chile and was found guilty of withholding information from a Congressional committee concerning his role in the Chilean coup.

14) While other major news organizations have been exposed as CIA media assets, such as CBS News, Life Magazine, the North American Newspaper Alliance and the Copley Newspaper chain, the Scripps-Howard News Service (SHNS) stands out not only because of the Kantor-Hendrix connection, but because of the March 12 news report out of Washington. An obvious black propaganda operation that stems from NSA intercepts (note that the NSA does not issue press releases), and continues to implicate Castro in not only the assassination of President Kennedy, but in the planning of an assassination on President Reagan. This story is remarkably similar to the one that Sturgis tells [in #12] and includes many of the same conspirators. [See: SHNS Story]. Also please note that two weeks after this obvious piece of black propaganda disinformation was published, President Reagan was shot in front of the Washington Hilton by John Hinkley.

Posted by William Kelly at 5:07 PM