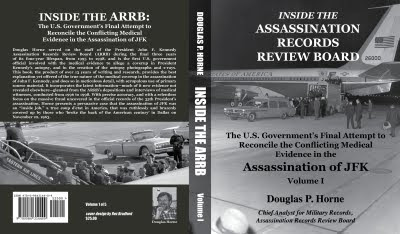 A MESSAGE FROM DOUG HORNE ABOUT HIS FORTHCOMING BOOK

I’m pleased to report that my book about the medical coverup in the Kennedy assassination, Inside the ARRB, is finally completed, and will be published in the near future, hopefully in December of 2009.

The only real certainty we are left with about the events in Dallas in 1963 is that there was a massive coverup, and that the two official explanations about what happened --- offered up by the Warren Commission and the HSCA --- cannot be true. So much physical evidence was destroyed, and so much tainted evidence was introduced into the official record, that I am convinced the reason the evidence in the Kennedy assassination “doesn’t come together” like a normal homicide case is because there is fraud in the evidence. To continue to assume that all of the evidence held by the U.S. government is sacrosanct, and should be accepted at face value, will only guarantee that there will never be a consensus about what happened. Much of the evidence processed by the Federal government is suspect, and tainted.

If the tainted evidence can be identified, and separated from the more trustworthy evidence, we stand a much better chance of understanding the nature of both the murder, and more importantly, the coverup. The coverup tells us more about the assassination than endless arguments about how many shooters there were, or where they were located in Dealey Plaza.

I felt compelled to attempt to unravel the mystery surrounding the medical evidence by taking a serious look at how much evidence was destroyed in 1963, and which evidence in the official record is likely tainted, and cannot be trusted (and why). It was no easy task; but neither was it an impossible endeavor.

Additionally, I closely examined the statements and testimony of key Parkland hospital and Bethesda autopsy witnesses over the years to see who had been consistent in describing events, and who had changed his testimony as time passed. I acted as a very curious citizen-detective, and made no starting assumptions about the presumed authenticity of any particular item of evidence.

What one believes about JFK’s assassination depends upon which data base one relies upon; there is so much conflicted evidence that one can “cherry pick” the evidence in the official record and come to almost any conclusion about the facts of the shooting. I attempted to examine the broad range of virtually all of the medical evidence, and tried very hard to avoid the limited and selective use of evidence, a mistake made by both the Warren Commission and the HSCA.

My conclusions are that neither the autopsy report (a document rewritten at least twice), nor the autopsy photographs and x-rays (which present dishonest and intentionally misleading images of the head wounds), can be relied upon to determine the reality of the event in Dealey Plaza, and that the original observations of the treating physicians and nurses at Parkland hospital remain the best single guide to the actual wounds sustained by President Kennedy --- but that they still must be judiciously married to certain other key facts, to ascertain what likely happened.

Once one accepts that JFK was killed by a crossfire, the focus shifts to the who and the why, and my book attempts to deal with this subject as well, for the assassination can only be understood in terms of the context in which it took place: at the height of the Cold War between the U.S. and the Soviet Union.

For more information on my book, please reference my blog:

Preface: Why Do I Care?

Part I: The ARRB Medical Witnesses

Prologue: The Culture of the ARRB p. 9

Part II: Fraud in the Evidence – A Pattern of Deception

Chapter 13: What Really Happened at the Bethesda Morgue (And in Dealey Plaza?) p.987

Part III: The Political Context of the Assassination

Chapter 15: The Setup – Planning the Texas Trip and the Dallas Motorcade p.1379

The illustrations are located at the end of Chapter Three
Posted by William Kelly at 5:11 PM