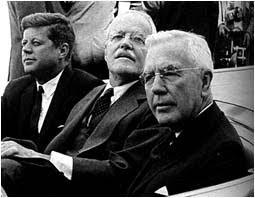 The complete excerpt on Arthur Lundahl by Dino Brugioni from his "Eyeball to Eyeball" can be found here: Inside the NPI Center

Besides giving a realy good insight into the operations of the center, much of which confirms the descriptions from Homer McMahon and Ben Hunter, Dino gives us the names of many employees and their job descriptions, along with some interesting insights into the major players during the crisis, many of whom dovetail with similar roles in the assassination drama.

Most significantly, he accurately describes LBJ's attitude towards McCone, who he didn't bother to even listen to.

Brugioni wrote: "McCone found Lyndon Johnson colorless and crude in intelligence matters and, as president, clumsy and heavy-handed in international affairs. Instead of personally carefully considering prepared intelligence memorandums on intelligence matters, he preferred to be briefed by trusted advisors. Increasingly, the president sought intelligence information almost exclusively from Secretary McNamara and the Defense Department. McCone's advice simply was no longer actively sought by the president. His role diminished, his influence faded, and the ready access he had enjoyed during the Kennedy administration became very limited…"

There's a book by one of McCone's assistants (Inside the CIA?) in which he describes accompaning McCone on the day after the assassination to Bundy's office in the basement of the White House next to the Situation Room.

LBJ and Bundy were huddled together and when McCone and his assistant show up to brief the President on the world situation, LBJ waves them off and tells them to just go away. There's nothing McCone could tell LBJ that he needed to know.

And then we have Dino Brugioni's report of the Zapruder film arriving at NPIC on Saturday night at about 10 PM.

According to the official records, SAIC Secret Service Dallas Sorrels got two of the first generation copies of the Z-film from Zapruder, one went to the FBI and another SS agent signed off to sending one copy to Washington on a military jet from Grand Prarie NAS at 10 PM on Nov. 22.

Twenty four hours later, the Secret Service show up at NPIC with the Z-film and they work all night to make still enlargments and briefing boards and analysize the thing, and the next day Lundahl briefs DCI McCone.

"Timing of the event: In the final analysis, Dino was of the very firm opinion that the event at NPIC which he supervised, as NPIC duty officer the weekend of the assassination, began on Saturday night, November 23, and ended early Sunday morning, November 24. In his first interview with Peter, Dino referred to the event as occurring the night of the assassination, but in subsequent interviews, as Dino refreshed his recollection, he became adamant that it commenced the next night—a day after the assassination. The event began about 10 PM in the evening, when Dino personally met two Secret Service agents at the entrance to the NPIC, and ended at about 6 or 7 AM the next morning when Brugioni's boss, Art Lundahl (the Director of NPIC), arrived and the briefing boards which Brugioni and the NPIC staff had created were presented to Lundahl, along with the briefing notes Brugioni had prepared. Lundahl then took both sets of briefing boards to the office of CIA Director John McCone, along with the briefing notes Brugioni had prepared for him; briefed the DCI; and then returned to NPIC later Sunday morning, November 24, and thanked everyone for their efforts the previous night, telling them that his briefing of McCone had gone well. Brugioni told Janney that the two Secret Service agents who had delivered the film to NPIC had departed with the film early Sunday morning, as soon as the last frames from the home movie had been enlarged and the briefing boards had been completed."

But they don't discuss exactly what it was that the photo interpreters and analysists concluded and what Lundahl told McCone in his briefing that Sunday morning.

In his Journals 1952-2000 (Penguin Press 2007) , Arthur M. Schlesinger Jr., for the Diary entry of December 5, 1963 (page 184) wrote: "Schlesinger and Robert Kennedy discussion Schlesinger: I asked him, perhaps tactlessly about Oswald. He said there could be no serious doubt that he was guilty, but there still was argument whether he did it by himself or as a part of a larger plot, whether organized by Castro or by gangsters. He said the FBI people thought he had done it by himself, but that McCone thought there were two people involved in the shooting."

Why would McCone think there were two people involved in the shooting, and tell that to Bobby Kennedy?

McCone would think that there were two people involved in the shooting if Lundahl told him that in his briefing after the NPIC analysis of the Z-film.

And McCone would tell RFK that if the source was reliable enough, and Lundahl was the most reliable briefer McCone or Kennedy knew.

But LBJ knew what the CIA knew, and he knew what McCone was going to tell him, so he blew him off, totally, and not only didn't LBJ want to know what Lundahl learned from the NPIC "exploitation" of the Z-film, he didn't want to hear anything from him about anything. Period.

So it is my speculative conclusion that the NPIC analysis of the Z-film on Saturday night led them to report to the director of the CIA that there was evidence that "two people were involved in the shooting."

McCone knew this, but was prohibited from reporting this to LBJ, who didn't want to hear it.
Posted by William Kelly at 9:14 PM