The NPIC B Team at the UN 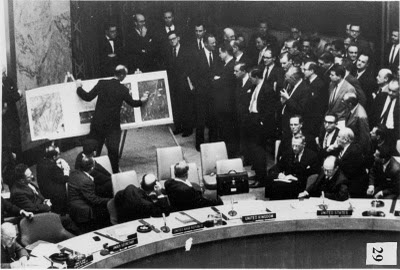 They wouldn't let Lundahl brief the public or the UN, as they didn't want to blow his cover and maintain him as the guy who briefed the people who made the decisions.

From what Homer McMahon said in his ARRB interview, I could only find a few things wrong with it - such as his missing the date of the move of NPIC from Steuart's Garage to the Navy Yard, which occured on January 1, 1963, two years after he said it happened. But McMahon also said he never worked at Steuart's Garage, so he wouldn't know the details.

While McMahon called the new shop in the Navy Yard "Lundahl's Palace," there is a reference to it being "Lundahl's Hilton," and in any case, they did get a bonus for their work during the Cuban Missile Crisis.

As for the other people mentioned by McMahon, here's a run down on what we've come up with so far. (Many thanks to Tom Scully and the A Team). - BK
Homer McMahon – Names

HM: I worked one summer at the FBI lab …My boss was [Jimmy?] Dunlap, who later became, left and went into business for himself and I worked for him part time, at different times.

Page 21 19. ….that to a photographic laboratory in Washington which is operated by a former FBI photographic expert, name is Dunlap. and he made what they call a contact negative, in other words I now have a negative 8x10, then he took the 8x10 negative
and enlarged negatives such as you see here and I have a series of these things all of which you gentlemen are more than welcome to, because I think you are doing the single most important/thing that is being done on the assassination and I think you have already become an important part of it.......

I used to work at...for Pop Baker
and that was Eastman Kodak Photofinishing Georgetown,

I went to the National School of Photography

In the early 1950s, Everett Merritt published works on analyticalphotogrammetry. He worked for the Naval Photographic Interpretation Center in Washington, D.C. He
“developed a series of analytical solutions for camera calibration, space
resection, interior and exterior orientation, relative and absolute orientation of stereo airs, and finally analytical control extension” [Doyle, 1964]. While sharing similarities to Church’s work, Merritt’s approach was more complete, handling a number of different problems. Incidentally, Merritt later served as a member on the photography evaluation group for the Warren Commission on the Kennedy assassination.

In July 1978, the U.S. House of Representatives Select Committee on Assassinations (SCA) requested U.S. Geological Survey (USGS) assistance in their investigation of the assassination of President John F. Kennedy. The assistance involved photogrammetric analyses of movie film and several snapshots. The snapshots were of Lee Harvey Oswald in the backyard of his home in Dallas in 1963, and the movie films were taken during the assassination by two separate bystanders, named Zapruder and Nix. This report deals only with the analysis of the movie film and prints made from selected frames. ...

....Mr. Everett L. Merritt, photogrammetric consultant to the SCA, acted as liaison between the committee and the USGS. The approach used in determining the limousine positions was devised by Dr. Atef Elassal, USGS, and is described in the following section.

and I went to the Washington School of Photography,
and I took courses at the US GS Graduate School at
the Law Enforcement Institute of Pathology at Walter Reed.

then I went to work for the CIA.
My mentor Mel Fromme (sp. phonetic)
an old OSS operative during the Second World War.
His dad ran the National School of Photography; I spent two years there,

http://www.brownalumnimagazine.com/content/view/807/40/
Harold J. Fromm ’48, of Rochester, N.Y.; Feb. 5. He retired after forty-two years at Eastman Kodak Co., where he was recognized nationally and internationally for his work in microfilm standards. A veteran of World War II, he was also a contributor to NASA’s Skylab team. He is survived by his wife, …., three daughters, seven grandchildren, and a brother.

http://books.google.com/books?um=1&q=%...rown+University
+in+1948.%22&btnG=Search+Books
The Journal of micrographics, Volumes 6-7‎ - Page 253
Photography - 1973...Harold J. Fromm received his Bachelor of Science Degree
in Physics from Brown University in 1948. Following graduation,
he joined the Applied Photography Division of the Eastman
Kodak Research Division of the Eastman Kodak Research Laboratories. His research
has been concerned largely with aspects of micro- photography and its
applications. At present he has the title of Research Associate in Physics, and is engaged in studies of the microimage characteristics of films and lenses, and the
determination of the photographic requirements for microfilm systems.
Mr. Fromm is a member of the Society of Photographic Scientists and Engineers,
and represents this society on the American National Standard Committee PH5.
He is chairman of PH5, a member of the NMA Standards Board and leader
of the NMA Standards Board and leader of the US delegation to the International Standards Organization meeting of TC46/SC1, Documentary Reproduction.

he got me a job interview with the CIA.
That was Printing Services Division,...
That was Austin Young (?). I worked there for a year and a half to two years.
Then I went into business for myself for five years, and
then went back for I think ten years..

HM: I could give you Harry Vicard [or Vickert?]...he’s retired, he worked at the Steuart but he retired, and I talked to him, and he said he could get me an interview, and I went over, or they come over, I was working for Austin Young on...[ in Alexander?]...right there at [Duke Street?]... or King Street, I've forgotten which.

HM: ... he came over and interviewed me and I transferred. I was LV16, I was under the GPA scale, I was in the Printing Services Division….

CLOUD NINE: A PROBLEM IN INTELLIGENCE PRODUCTION
File Format: PDF/Adobe Acrobat - Quick View
for Intelligence at CIA a document that for a brief but frantic period ...were performed in Printing Services Division's plant on the seventh ...
https://www.cia.gov/library/center-for-the...of.../v13i4a02p.pdf -

HM: We had...it was...a world beyond. We had unlimited budget...we had anything we wanted to buy, unlimited money, and it was a palace, it was Lundahl's Palace. I think they said 90% of intelligence came from our operation. And that was, that was what the analysts and photo interpreters did. And they knew along with,...I was in the science division now, but they also had accessed and used other information.
Posted by William Kelly at 9:11 PM

I am the daughter of william mac ewan duff. just found out that he was hired by general walker also was the one who tired to kill him and know ruby and olwalt .. look up secert service william mac ewan duff. he was a big part of jfk
murder if you have any info on my dad please e-mail frazier.alice3@gmail.com his sercert is finally out on who my dad was and how we hide from the FBI..... my father had a very big part in the killing of jfk...

Hello I ran into this website and managed to scroll down till I saw my mother had commented on here. I am Alice's son and my name is Christopher Italia. My mother had past away 5 months ago and I am finishing up her journey to finding her father. I realize her father who is my grandpa had been in the CIA for a decade and would need help. If you have any information that can help lead to his aware bouts please email me at Italia.chris@gmail.com