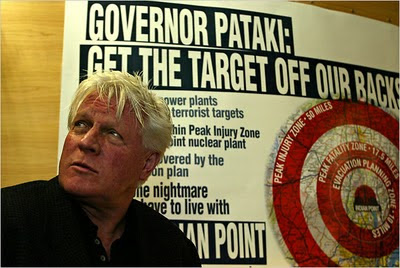 Gene Case was an early and enthusiastic supporter of COPA - the Coalition On Political Assassinations, and used his finely tuned Madison Avenue advertising skills to advance our cause.

While he once designed a classic anti-war advertising campaign in support of Lyndon Johnson against Barry Goldwater, Case devised an ad for COPA that ran in the Dallas newspaper on the 40th anniversary of the assassination that featured the famous photo of LBJ being sworn in aboard Air Force One on November 22, 1963 with the caption: REGIME CHANGE.

At the time of his death he was preparing a much larger campaign for the 50th anniversary of JFK's assassination with a poster made of a JFK half dollar with a bullet hole in the head and the caption: "50 Years Of Denial Is Enough - Release the Secret Files Now - Unearth the Truth by 2013."

John Judge, COPA director, wrote, “I just tonight found out that my friend and supporter Gene Case of Avenging Angels, Inc. in NYC passed on September 9 this year. Gene was a JFK assassination researcher, advocate inside The Nation magazine, supporter of COPA and the Museum of Hidden History, brilliant and progressive ad man, and a wonderful human being with a sense of humor.”

From an email sent to me this year:

I am slouching toward the Fiftieth Anniversary in 2013. That will be ourlast, best chance to win. Obama is inspiring comparisons to JFK and new appreciation of him and there was already (late last year?) the stunning about-face of Time magazine with its admiring cover story.

We need to make a massive community collaborative effort culminating on November 22, 21 It's true that "The Community" is not famous for itscollaborative skills. But everybody's getting dangerously old. The theme could be "KILL THE LIE BEFORE YOU DIE." Notice that it rhymes--that's alwaysgood. "The fierce urgency of now!"

I intend to photo-shop the attached graphic icon based on the Kennedy half-dollar, flopping the profile so that the fatal wound is on the right side and altering the date on the coin to 1963. (No-one will notice the poetic license.) Under the coin would be a title like "50 Years of Denial is Enough." It makes a good button, good logo, good bumper sticker, good book dust jacket, etc.

Judge notes: "Gene Case was a JFK assassination researcher, good friend and supporter of both COPA and the idea of a museum in Washington, DC that would highlight the assassination. He was thinking about and working toward a 50th anniversary conference and campaign to get at the truth after 50 years of denial. He did covers for the Nation and often tried to change their policy of not printing information on the conspiracy. A brilliant ad man, he left a commercial firm and wealth to form his own ad agency dedicated to helping progressive causes. I worked with him during its first year, finding clients in the nonprofit advocacy groups in DC. He will be sorely missed in our circles."

"At one small gathering of key JFK researchers for a weekend he asked 'Is this just a hobby for you guys or do you want do something about it?'"

"His slogan for Avenging Angels, Inc. was 'It's time for the better angels of our nature to start kicking ass!'"

"Indeed. Let's not let him die in vain. John Judge"

Gene Case, Who Marketed After-Shave and Politicians, Dies at 72

Advertising portfolios are grab bags, collections of products and services and ideas connected only by the person who was hired to sell them. But certainly Gene Case, who helped peddle Lyndon B. Johnson for the presidency and Tums for the tummy, had a wider sales range than most.

Gene Case, who helped found an ad agency in the 1960’s, turned his energies to liberal political causes.

Mr. Case, who worked in advertising from the age of “Mad Men” to the age of Obama, founded the half-billion-dollar agency Jordan McGrath Case & Partners, created the “Thanks. I needed that” campaign for Mennen Skin Bracer and spent his last years creating campaigns on behalf of liberal causes, died Thursday in Manhattan. He was 72.

The cause of death was a heart attack, the family said.

Mr. Case was a copywriter at Doyle Dane Bernbach, the agency that created the “Think small” campaign for the Volkswagen Beetle, when he was assigned to Lyndon B. Johnson’s 1964 campaign against Senator Barry Goldwater. He worked with the team that created the famous antinuclear “Daisy ad,” in which the image of a little girl counting down the petals of a daisy melds into the image of a nuclear explosion.

In another signature ad from the campaign, a young man who says he has always been a Republican talks to the camera for an astonishing four minutes about his fear of Goldwater, his party’s candidate, as a nuclear hawk. According to Stephen Kling, senior art director of Mr. Case’s last agency, Avenging Angels, Mr. Case wrote the copy for that ad.

In 1966, Mr. Case’s ads, focusing on issues like pollution control, helped Nelson A. Rockefeller win a third term as governor of New York. He also wrote the ads for Rockefeller’s failed attempt to win the 1968 Republican presidential nomination. Later, after he and others formed the agency that became Jordan McGrath Case & Partners, Mr. Case wrote ads for the New York mayoral campaigns of Robert F. Wagner and Bella Abzug.
Jordan McGrath was largely a commercial agency, however; at its peak, in the 1990s, it booked $500 million a year. One of Mr. Case’s more memorable creations there was the Skin Bracer campaign in which different men (including a young John Goodman), applying the “chin chiller” after shaving, would be slapped across the face (or would slap themselves) and utter the catchphrase: “Thanks. I needed that.”

Mr. Case also worked on ads for Tums, the antacid, and came up with the idea for a musical tag, “tum-ta-tum-tum,” chanted to the rhythm of the theme from the television show “Dragnet.”

“Which we paid for through the nose for the next 15 years,” Patrick J. McGrath, one of Mr. Case’s former partners, said with a laugh in an interview.

In 2002, Mr. Case returned to the political arena when he helped found Avenging Angels, an advocacy ad agency that creates campaigns for liberal causes. His ads there opposed the war in Iraq and nuclear proliferation and supported the Democratic National Committee, the environmental group Riverkeeper, bans on assault weapons and the magazine The Nation.

“I’ve been in this business for 42 years,” Mr. Case said in an interview in The New York Times in 2003 about his decision to return to advocacy advertising. “And I’ve never been so productive, so happy — and so poor.”

Eugene Lawrence Case was born on Dec. 6, 1937, in Knoxville, Tenn., where his father, Harry, was personnel director for the Tennessee Valley Authority, the New Deal program under President Franklin D. Roosevelt. Like his father, Mr. Case graduated from Cornell, where he studied architecture. He took his first copywriter job in 1961, at the J. Walter Thompson agency.

Mr. McGrath, his former partner, said that Mr. Case had been an especially skilled writer but that even that gift had paled in comparison to his creativity as a pitchman.

“He was without a doubt the best presenter of advertising who ever lived,” Mr. McGrath said. “Clients were sometimes unhappy because the ads weren’t as good as the presentation.”