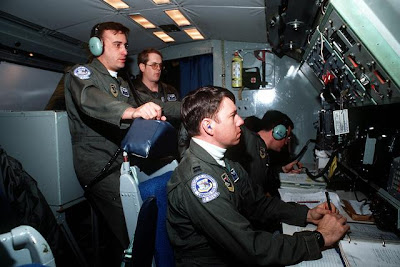 A mark of America's strategic excellence is its preeminent ability to command, control, and communicate with its nuclear forces. An essential element of that ability is the Airborne Command Post, also called "Looking Glass.", which was retired from service on 01 October 1998. Its highly-trained crew and staff ensured there was always an aircraft ready to direct bombers and missiles from the air should ground-based command centers become inoperable. Looking Glass guaranteed that U.S. strategic forces would act only in the precise manner dictated by the President.

The now-deactivated Strategic Air Command (SAC) began the mission on February 3, 1961. It took the nickname Looking Glass because the mission mirrored ground-based command, control, and communications. From that date, a Looking Glass aircraft was in the air at all times 24 hours a day, 365 days a year for more than 29 years. On July 24, 1990, Looking Glass ceased continuous airborne alert, but it remained on ground or airborne alert 24 hours a day. Crews accumulated more than 281,000 accident-free flying hours.

Vasilios Vazakas called attention to the fact that the transcript of Peter Dale Scott's Dallas COPA talk that I posted here was missing a key section, which I now post there, along with a photo of Looking Glass in action and some other sources on the topic.

The Importance of Alternative Networks to Provocation-Deceptions

If one part of the government is deceiving another, it needs its own alternative network to do so. Oliver North, for example, used just such an anti-terrorist network, codenamed Flashboard, to conduct the Iran-Contra arms operations for which he was ultimately fired.

Others beside myself have pointed to the meta-importance of those charged with overseeing the Doomsday communications network, known most recently as the Continuity of Government (COG) network. James Mann, for example, has referred to the COG network overseers as “part of the permanent, though hidden, national security apparatus of the United States, inhabitants of a world in which Presidents may come and go, but America always keeps on fighting.”

In 1991 a CNN feature on the COG overseers described them even more ominously as a “shadow government,” and opened with “In the United States Federal Government there is a super-secret agency which controls this Shadow Government.”

We saw that the key to the provocation-deception producing the false Second Tonkin Gulf Incident depended on the ability to transmit false information on a restricted special network. I have written elsewhere about the importance of war exercises on 9/11 that were being conducted on the special “continuity of government” (COG) network. That Crichton had access to this network in 1963 is a surprising discovery that makes me want to explore more fully a few of the military analogies between the Kennedy assassination in 1963, or what we may call 11/22, and 9/11 almost four decades later.

I wish I knew enough to talk today about the small detail that on both 11/22 and 9/11 there were unexplained reports involving an Air Force special plane, the so-called “Doomsday plane,” – the plane that serves as the military airborne command post (NEACP, pronounced “Kneecap”) for special emergencies. The NEACP flight on 9/11 was in conjunction with a war game, Global Guardian; that on 11/22 has been characterized as a “training” exercise only. But one would like to know whether or not the 11/22 training exercise involved Jack Crichton and the Civil Defense Office in Dallas.

On 11/22 we know only that the EC-135 that served then as the National Emergency Airborne Command Post (NEACP, or “Kneecap”), when in fact airborne, contacted the Fourth Army Headquarters at Fort Sam Houston in San Antonio, Texas. The call was extremely brief:

“This is Silver Dollar calling to test communications. I read you loud and clear, loud and clear. How do you read me?” But it was not routine: the army person receiving did not know what “Silver Dollar” meant (it was NEACP’s communications code name). This led to army intelligence inquiries that day, as soon as it was realized that the call, at 12:25 PM, had come just five minutes before JFK was assassinated.# The fact that NEACP was airborne and making test calls might seem irrelevant to events on the ground in Dallas, until we learn that Crichton’s Civil Defense Post was part of its network.

By 2001 the emergency communications network administered by the Doomsday Plane had been massively augmented in Project 908, a project overseen in the 1980s by a continuity of government (COG) or Doomsday planning group whose membership included Donald Rumsfeld and Dick Cheney. As part of the upgrade, the old EC-135s of NEACP had been replaced by four Boeing E-4Bs, now known as “Advanced Airborne Command Posts,” with a project name of “Night Watch.”

According to the Pentagon, all four are assigned to the 55th Wing at Offutt Air Force Base in Nebraska, the Strategic Air Force Command or STRATCOM base to which George W. Bush flew on 9/11. Three of them were airborne on that day, in connection with a live command-level exercise called Global Guardian. One of them was said to be carrying the members of the President’s Foreign Intelligence Advisory Board, which was joined one month later by Philip Zelikow, still later director of the 9/11 Commission.

Stratcom canceled the 9/11 war exercises at 9:03 AM, when the second tower was hit. Nevertheless, one of the Doomsday planes was seen and recorded by CNN one hour later, just before 10 AM, in the restricted air space over the White House.# This was about the time that, as I have described elsewhere, Cheney and perhaps Rumsfeld had begun to use the emergency COG communications network administered by the E-4B.

Common sense suggests that it would have been natural to divert an EC4B, already airborne on 9/11 for Global Guardian, to oversight of the perceived attack on Washington. But the very core of COG planning was to ensure geographic separation between the existing government and its shadow alternate. Cheney reportedly sequestered personnel in underground bunkers for ninety days after 9/11, “since there was evidence, he hinted, that the terrorist organization al-Qa’ida…had nuclear weapons”

The EC4B’s presence in Washington can be taken as an indication that those responsible for its presence there (presumably Cheney and Rumsfeld) had no such worries for its safety. Recent research by Larry Hancock and Larry Haapanen indicates a similar situation on 11/22: available records suggest that while some senior bureaucrats worried about the possibility of a foreign attack on that day, there was an eerie passivity at the highest levels, suggesting no such concern.

This would indicate that, while phase-one stories such as Stringfellow’s report were being transmitted, those at the highest level of responsibility set no store by them. I doubt that this disconnect can be attributed to ignorance. On the contrary, I take
Crichton’s status in the Center as an sign that persons intimately involved with each deep event (Crichton on 11/22, Dick Cheney and Donald Rumsfeld on 9/11) were part of the secret Doomsday communications network evolved to deal with a national emergency.

The same observation can be made about key figures in Watergate and Iran-Contra, the two other major deep events of the last half-century. James McCord, the leader of the burglars arrested inside Watergate, was among other things a colonel in the Air Force Reserve, in a small unit charged with developing contingency plans in a national emergency “for imposing censorship on the press, the mails and all telecommunications (including government communications).”

Oliver North, the Reagan White House point man on both Iran-Contra and COG planning, had access to a secure communications system “that excluded other bureaucrats with opposing viewpoints…The counter-terrorism network even had its own special worldwide antiterrorist computer network, codenamed Flashboard, by which members could communicate exclusively with each other and their collaborators abroad.”# It was by this time, as noted above, that COG emergency planning had been redefined under Reagan to designate “terrorism” as its principal target.

Those with resource to such secure networks are in a position to manipulate our country’s history, when necessary by provocation-deception plots.
Posted by William Kelly at 12:40 AM