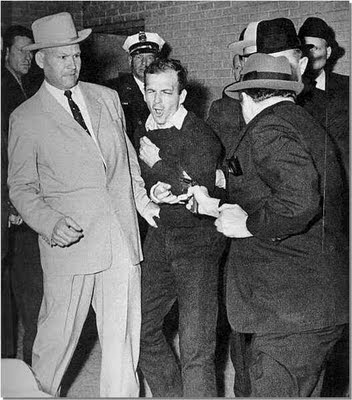 Conspiracy theorists would have had a field day if Bob Porter had been killed, but he lived to tell the tail. This is an oldie but goody that I thought I would bring back for laughs and giggles. I know both Bob Porter and Wes Wise, as they interviewed me on videotape at the Sixth Floor for their oral history project, a really important task.

They also have interviews with many other important but unknown witnesses, and those interviews should be transcribed and put on line. - BK


The Saturday, December 5, 1992 article in the Dallas Morning News read:
JFK Researcher Accidentally Shot
Man is wounded by detective who was handcuffed to Oswald.

A photographer documenting how a Dallas police officer tried to keep Jack Ruby from shooting Lee Harvey Oswald was accidentally shot himself Thursday.

The bullet was fired from a replica of the gun that killed Oswald.

And the man holding the .38 caliber Cobra was the same detective who was handcuffed to Oswald when the assassin was slain in the basement of Dallas police headquarters 29 years ago.

The photographer, Bob Porter, and former Dallas mayor Wes Wise were at the Garland home of former detective James Leavelle, interviewing him for an oral history project on the Kennedy assassination.

As Mr. Leavelle was demonstrating how to grip the revolver’s cylinder to keep it from firing, the gun went off, tearing into Mr. Porter’s upper right arm.

“It was strictly an accident, “ Mr. Leavelle said. “It was a very unfortunate thing. I should have known better.”

Mr. Porter, who is director of public programming for the Sixth Floor, the West End exhibit on the Kennedy assassination, was in fair condition Friday at Parkland Memorial Hospital after reconstruction surgery on his arm. He is expected to regain about 85 percent of the use of the limb, said his niece, Shelly Porter.

At the time of the Oswald slaying, Mr. Porter worked for the Dallas Times Herald and Mr. Wise, who said he knew Jack Ruby and was a witness at his trial, worked for what was then KRLD-TV (Channel 4).

The 72 year old Mr. Leavelle, who is wearing the white hat in the well-known photography of the Oswald slaying, said he was showing Mr. Porter and Mr. Wise how another detective, L.C. Graves, grabbed Mr. Ruby’s gun in an attempt to stop him from firing.

“I was demonstrating how he gun was held by Detective Graves to keep him from firing,” Mr. Leavelle said Friday. “I was showing them how a cylinder turns on a revolver and how if you stop the cylinder from turning, it won’t fire. They didn’t know that.”

Mr. Leavelle said he had an unloaded pistol and a loaded one. “I just picked up the wrong one.”

“Bob didn’t know he’d been shot,” said Mrs. Porter, who visited her brother-in-law in the hospital early Friday. “Bob said when the explosion of the shot rang out, he said, ‘My God, was that a blank?’ and Mr. Leavelle said, ‘No, it couldn’t have been a blan, and then Bob was in pain.”

Mr. Wise said he also believed that the gun contained a blank.

But Mr. Leavelle realized immediately that he had not shot a blank.

“As soon as he jumped, I knew what happened,” he said. “I was totally shocked that it was loaded.”

As Mr. Wise called 911, Mr. Leavelle wrapped a towel around Mr. Porter’s arm. “I was kind of proud how we all hopped to it then,” Mr. Wise said. “Everybody remained calm.”

Mr. Wise said it was “a blessing” that Mr. Porter was struck in the arm and not in the chest. “Just a few inches made the difference.”

Said Mr. Porter’s sister-in-law, “I suppose you could say that it’s rather odd circumstances. We’ve never had anybody be shot before, so this is kind of a new thing, and we don’t like it.”
Posted by William Kelly at 11:03 PM