View from the Grassy Knoll 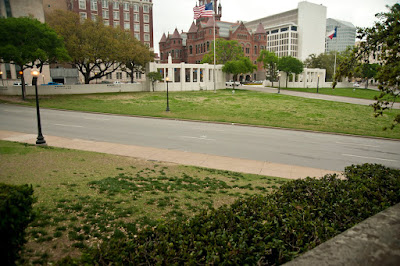 Dallas is playing to its City of Hate stereotype for assassination's anniversary.
By Jim Schutze Thursday, Dec 1 2011

The 50th anniversary of the murder of President John F. Kennedy in Dealey Plaza is still two years off, but somebody is already trying to shut down the plaza for the entire week of November 22, 2013. I'm not sure who yet. It's either the Sixth Floor Museum or City Hall.

Who is it who thinks this is the way for Dallas to project an appealing image of itself? In the zeitgeist of Tahrir Square and Occupy Wall Street, does someone actually believe Dallas will make itself look better by jumping with both jackboots on freedom of expression at the 50th anniversary of the Kennedy assassination here?

Take one iconic chapter, the Japanese bombing of Pearl Harbor on the morning of December 7, 1941. In the months leading up to the 50th anniversary on December 7, 1991, American and British publishing companies cranked out a river of conspiracy-theory books about the Japanese sinking of America's Pacific fleet.

For a half century American schoolchildren had been taught that Japan's surprise bombing attack was what drew the United States into war, so one company reissued a book for the anniversary saying that the official version was a lie. In A Time for War, author Robert Smithy Thompson argued that long before Pearl Harbor, America had thrown the first punch by covertly assisting China against Japan. Pearl Harbor, he said, was just Japan defending itself.

In Infamy: Pearl Harbor And its Aftermath, John Toland joined an entire list of authors arguing that the American military had cracked the Japanese secret codes and was reading all their mail long before Pearl Harbor. The accusation of these authors was that President Franklin Delano Roosevelt wanted the Japanese to sink his Pacific fleet and kill 2,402 Americans so he would have an excuse to go to war.

Now that's a conspiracy theory. Might as well write a book saying the Bible was written in 1952 by Lenny Bruce.

In the autumn 1991 issue of MHQ, a quarterly journal of military history, David Kahn, the leading American expert on the subject of Japanese codes and Pearl Harbor, said that all of these theories were (and the wording that follows is mine, not his) complete and unadulterated bullshit.

In his article, Kahn said the Japanese never sent out a message, coded or uncoded, that said, "Big attack on Pearl Harbor coming up December 7." The coded messages we did intercept were drops of obscure water in a vast river of intelligence — things that have special meaning only if you're looking back with the microscope of hindsight from a vantage point 50 years later, and you're trying to hawk a book.

And maybe that's where a lot of conspiracy theory comes from. People get their scales of significance all whomper-jawed. You forget and turn your telescope around backwards, and all of a sudden that guy at the next table about to spear a stewed carrot on his plate looks like a Croatian malefactor on the roof across the street about to squeeze off a heat-seeking missile in your direction.

But that's OK. This country was founded on the belief that we can take anybody's book standing up, even the most wrong of the wrong, and we'd much rather do that than give up our freedom of speech.

And yet Dallas continues to make itself an ugly exception to this rule. I have written before about the struggles of Robert Groden, a best-selling author and recognized expert on the famous Zapruder film of the Kennedy assassination, whom the city clapped in cuffs and hauled off to jail for the sin of selling his books from a table at Dealey Plaza, even though such sales were explicitly allowed under city codes in force at the time.

Groden is now suing the city in federal court for violations of his basic civil rights. It was Groden's attorney, Bradley Kizzia, who informed me of the attempt to take over Dealey Plaza for the 50th.

This was after an odd little story in The Dallas Morning News on October 30 — one of those weird sort of out-of-the-blue, doesn't-quite-make-sense Morning News stories you have to have a magic decoder ring to understand — about how the assassination museum never used to have anything to do with anniversaries of Kennedy's murder in Dallas, but for the 50th they were going to take over the whole thing.

Why is that weird? You have to know the context. Right after the assassination, publishing companies cranked out a slew of blame-it-on-Dallas books, and some of the authors said even more pointedly that some of the blame should go to the Morning News for fomenting a right-wing screwball atmosphere. Like right-wing screwballs get that way from reading the paper. But anyway, that's what they said, so the paper has always had a thin skin about these matters.

The October story in the News said, "... to avoid the carnival atmosphere that has often prevailed at previous anniversaries on the plaza, museum officials are planning to take over commemoration activities there."

It quoted assassination museum director Nicola Longford as saying: "We have reserved Dealey Plaza for that date. I think, for the 50th anniversary, we have an opportunity to offer a dignified, appropriate event for the city of Dallas."

But Longford didn't seem to have much concrete detail to offer. Later in the story she said, "I don't think we know yet what will take place. It may be simply a moment of silence."

OK, you ask what's wrong with "dignified" and "appropriate." What evil plot can there be in a moment of silence? I shall explain. But, first, please put this on your head. It's a tinfoil hat. Just like mine. We need to be on the same wavelength.

After asking nicely for information about the planned event and being brushed off, Kizzia filed a legal demand under the Texas public records law for the application for an event permit and related correspondence and emails. What came back was a six-page document showing that the assassination museum wanted full control of all the Dealey Plaza area from November 18 through November 24, 2013, from 8 a.m. to 10 p.m., for seven days.
For a moment of silence? A bit of arithmetic here, and I come up with a moment of silence under this formulation that would be 98 hours long. That's a heck of a lot of silence.

The permit application is typed and filled out in Longford's name, but it is unsigned.
Oh, now I'm really getting out into wig-land, right? Well, hold on to your tinfoil for a second. There is more. One of the emails Kizzia obtained from the city was from Jill Beam, the person in the Parks Department who hands out such permits, to a person who had asked if his own group of assassination buffs could hold their own brief moment of silence on the plaza for the 50th, as they have in years past.

The sad news, apparently, was that the moments of silence were all taken. The museum, with its 98-hour moment of silence, had pretty well silenced any other moments.

But here's the juicy part, conspiracy-wise. Beam tells the inquiring citizen at one point: "I am in touch with the folks from the City, who are actually requesting the site for 2013, to see exactly where they will be hosting their event."

Catch that? She didn't say, "the folks from the museum." She said, "from the city." So who's behind this deal, anyway?

Now here's my favorite part. I tried eight ways to Sunday to get the people at the assassination museum and the people at City Hall to talk to me about this. What did I get? I want you to guess. It's one word. It's a kind of wall. A very hard wall. Yup. I got ...
Stonewalled!

Oh, it's what we tinfoil hatters just live for. There's almost nothing better than getting stonewalled. It's so deeply and fundamentally confirmatory.

We're almost done here. Would you mind taking off that goofy hat? We need to be serious now.

The accusation was always that some dark shadowy group in Dallas was behind the assassination. Dallas resented that. I understand. Dallas still wants that impression to go away. I think maybe in 50 years it probably has gone away, but some people here are still sensitive.

Just for example: You don't send out the jackboots to arrest authors who disagree with you. In the world of dark shadowy groups, that's called "playing to your stereotype."

Here's another suggestion. Don't announce that you're going to hold a 98-hour moment of silence so nobody else can have even a 30-second moment of silence. It's just ... I don't know ... it sounds like a line from a Kurt Vonnegut novel.

And what do you think will happen on November 22, 2013, anyway? I have spoken with members of some of the groups that are being shut out, and they are already kicking around the phrase "Occupy Dealey Plaza."

Ah, well, maybe ... just forget it. A half century later, and we're still walking straight into it. Can't argue with destiny.
Posted by William Kelly at 11:33 PM