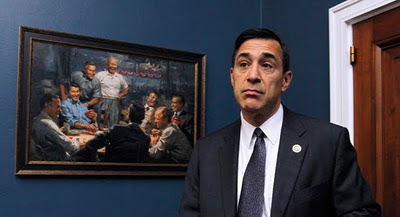 Meet the Chairman of the House Oversight Committee, the one man who can schedule an oversight hearing on the JFK Act of 1992, which hasn't had an oversight hearing since 1997, and should have one now that the 50th anniversary of the assassination of President Kennedy is approaching.

We only have to convince one man to hold the hearing - Issa - a conservative Republican from north San Diego, California, who is the richest man in the House of Representatives.

But he's a poker playing Republican, as can be seen by the picture on the wall of his office, and we can play poker with him, as we have a few aces in our hand. 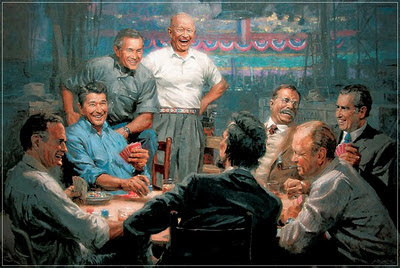 From the same artist Andy Thomas: 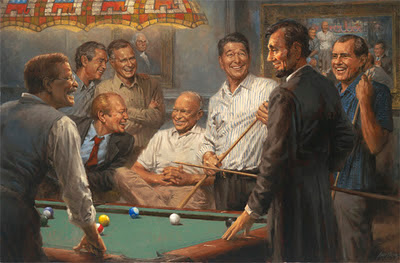 We are starting a "Please tell me when?" campaign to get Rep. Issa to schedule a long overdue JFK Act Oversight Hearing by asking him to please tell us when he schedules one.

If everyone who contacted their congressman after seeing Oliver Stone's "JFK" and complained about the secret JFK Assassination records will once again ask their representative why so many thousands of JFK assassination records are still being withheld, why many were deliberately destroyed after the Act was instituted and why there are so many missing? Why? And why hasn't Congress held an oversight hearing to ask that question of any responsible person?

Be direct and frank but not rude.
Please Facebook, phone, write, email, fax and send a letter via the US Mail to:

Dear Mr. Chairman Issa, Please inform me when you schedule an oversight hearing on the JFK Act, as I am interested in the proceedings. Can you tell me why there are so many still-withheld government records on the assassination of President Kennedy, and why, 50 years afterwards, the public still cannot read them? Thank you,

Congress passed the JFK Act of 1992, requiring the release of all government records related to the assassination of President John F. Kennedy in order to regain the publics confidence in government, which has been in steady decline since November 1963. That has not happened.

The House Oversight Committee has not held one hearing on this issue in nearly 15 years (June 1997), despite the destruction of Secret Service documents, the loss of national security records and the continued wrongful withholding of records that Congress has ordered released to the public.

It is imperative that Congress take some action to ensure that the law is enforced, the work mandated by the JFK Assassination Records Act is completed, and the government regain the confidence of the American public.

Therefore, we, the undersigned citizens of the United States and the free world, do hereby request the House Oversight Committee do its duty and hold public oversight hearings on the JFK Act.

We have a core 200 signatures and need to get a key 1,000. Be one of us.
Sign Your Name By emailing me: bkjfk3@yahoo.com or sign the petition on line at:

Posted by William Kelly at 3:24 AM