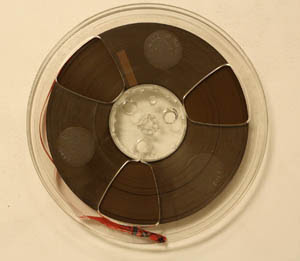 WASHINGTON -- The Kennedy assassination was one of the most heart-wrenching and chaotic events in modern American history -- and one still replete with mysteries.
But now a little more light has been shed on one of them: What was edited out of the flight deck recording from Air Force One as it carried John F. Kennedy’s body and the new president, Lyndon B. Johnson, from Dallas to Washington.

The National Archives and Records Administration today released a newly discovered recording – running about 2 hours and 20 minutes -- that is nearly 40 minutes longer than the only version previously known to exist.

The more complete recording was discovered last year by the Raab Collection, a manuscript collector in Pennsylvania, after one of its agents purchased at auction a box of personal effects from the estate of General Chester Clifton, who was Kennedy’s military aide.

The whereabouts of the complete Air Force One radio transmissions from Nov. 22, 1963, still remain a mystery. But what makes this a historically significant find is that it is an earlier version of the raw transmissions than the one housed at the LBJ Library, which was more heavily edited and runs only about an hour and 40 minutes.

“This is the earliest that likely exists,” said Nathan Raab, vice president of the Raab Collection in Ardmore, Pa.

The newly found tape, a copy of which was donated to the Archives, includes never-before-heard transmissions between the White House Situation Room and another plane taking Secretary of State Dean Rusk and other Cabinet members to Tokyo at the time of Kennedy’s shooting and was turned back. It also contains an urgent request to locate the head of the Air Force, General Curtis LeMay, whose whereabouts in the immediate aftermath of the assassination have remained an obsession for generations of conspiracy theorists.

Some of the newly discovered radio traffic is raw and uncensored, such as when Rusk and his party are informed of the shooting while flying over the Pacific.

“Kennedy apparently shot in head,” the male radio operator in the Situation Room reports. “He fell face down in back seat of his car, blood was on his head, Mrs. Kennedy cried ‘oh, no’ and tried to hold up his head.”

Also heard are more mundane things, such as the pilots of Air Force One discussing how to avoid tornados in Arkansas and Mississippi along the flight path from Dallas to Washington, D.C.

Raab said he was most intrigued by the portion involving LeMay. Kennedy and the hawkish Air Force chief were widely known to mistrust each other and all references to LeMay were deleted in the Johnson Library version of the recording.

In the longer version, one of LeMay’s aides, a Colonel Dorman, contacts the White House Situation Room seeking to reach the general, who he tells them is flying in a C-140 aircraft with the last three numbers 497 and whose code name is “Grandson.”

“And I want to talk to him,” the colonel says. Any delay, he adds, “would be too late.”

But he is told they will have to interrupt transmissions with Air Force One to do so. The Situation Room reports that they are using both frequencies available to communicate with the presidential aircraft.

Summarizing the portions of the tape not made public before, the National Archives cited “references to new code names and incidents; a private conversation between Jerry Behn, the head of the Secret Service, and an unidentified individual about the disposition of the president’s body; an urgent effort by an aide to Air Force Chief of Staff Curtis LeMay to reach [him]; and attempts to locate various members of Congress from the Texas delegation.”

Archivist of the United States David S. Ferriero said the recording “provides additional documentation concerning the immediate response of the US Government on the day of President Kennedy’s assassination.”

The tape, added, Raab, “will allow the public a more complete view of the chaotic circumstances following the assassination of President Kennedy.”

But the recording only goes so far. Several hours of raw tape are still missing. The transmissions heard on Air Force One that day should cover more than four hours -- from before 2 p.m. Eastern time to after 6 p.m., when the new president and the casket bearing JFK arrived at Andrews Air Force Base in suburban Maryland.

“The raw tapes never resurfaced after 1965-66, and the very existence of the first Air Force One assassination tape [found among Clifton’s papers] was forgotten,” said the Raab Collection. “Over the years all the efforts to find the raw tapes or any other original version proved fruitless.

They are no longer with the White House Communications Agency, where they were created.”
The Raab Collection is selling the original copy of the reel-to-reel recording for $500,000, along with other items found among Clifton’s estate, including an autographed photograph of President Kennedy.

Bryan Bender can be reached at bender@globe.com

Long-lost audio recordings of the aftermath of president John F. Kennedy's assassination have been made public, captivating historians and stirring fascination about that fateful day.

Almost 50 years after the November 22, 1963 assassination, a two hour and 22 minute reel was found among the personal effects of JFK's senior military aide, Major General Chester Clifton, who died in 1991.

The reel contains more than 30 minutes of previously unheard footage of conversations on board Air Force One as Kennedy's body was being transported back to Washington from Dallas.

It includes new code names and incidents, including a private conversation by the head of the Secret Service, Jerry Behn, about where to take the body and plans for where the First Lady,Jacqueline Kennedy, would be taken.

There is also an urgent effort by an aide to Air Force chief of staffCurtis LeMay, a well-known hawk and Kennedy critic, to reach Clifton; and attempts to locate various congressmen from Texas.

The material was acquired by the Raab Collection, a rare documents dealer based in Philadelphia, who donated a digitized copy to the National Archives, made public at gpo.gov/fdsys.

Experts say the tapes will stir debate among conspiracy theorists, especially about LeMay, a major Kennedy adversary whose name was conspicuously missing from an edited version of the original tape.

"People have always wanted to know where was Curtis LeMay on the day Kennedy was shot and there have been mixed messages about it. This tape provides exactly where he was," Kennedy historian Douglas Brinkley told CNN.

The Raab Collection is looking to sell on the original box and tape -- which has a label reading "Radio Traffic involving AF-1 in flight from Dallas, Texas to Andrews AFB on November 22, 1963" -- for $500,000.

"As Americans have looked to the history of the Kennedy assassination in search of answers, somewhere in an attic there existed a tape, made years before the only known surviving version, of the conversations on Air Force One on that fateful day," vice-president Nathan Raab says in a sale flier.

"This longer, more complete tape is a crucial discovery, and a landmark piece of American history."

The recording is a longer, unedited version of audio produced by the library of president Lyndon Johnson, who succeeded Kennedy after the assassination.
Posted by William Kelly at 8:02 AM