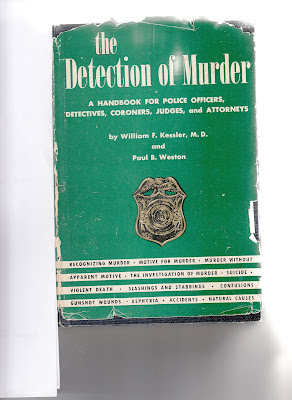 Larry Hancock’s new book on the assassination of President Kennedy Nexus, is unique in its approach. As Larry explained it – rather than following the evidence and clues from the scene of the crime – which inevitably leads to the pre-selected patsy, he looks at the killing of Kennedy from the top down.

As Jim DiEugenio wrote in his review of the book, “Larry Hancock’s new book Nexus has an interesting and rather unique idea behind it - the idea here was to trace the Kennedy assassination from a macroscopic view. That is, from the top down rather than from a typical detective story, which works from the bottom up. I thought it was a good idea, and something that, to my knowledge, had not been done before.”

The Detection of Murder – A Handbook for Police Officers, Detectives, Coroners, Judges and Attorneys, by William F. Kessler, M.D. and Paul B. Weston (1953, Greenberg), provides useful information for those involved in the investigation of murder.

Conviction is the fixed conviction that anything, including murder, is necessary to carry out a plan, whether it be religious, political or personal in nature. As an example, they cites, “Anarchist excuse their crimes, their wanton slaughter of the innocent, because of their political beliefs.”

Because of the accused assassin Lee Harvey Oswald’s defection to Russia, his Fair Play for Cuba Committee activities and his visit to the Cuban and Russian embassies in Mexico City, these incidents superficially imply that he was motivated by conviction, but he actually liked Kennedy, and those who attribute conviction as a motive for the assassin can only say that he was also crazy.

But no one who actually knew Oswald, other than Volkmar Schmidt [See: interview with Volkmar Schmidt], suspected he was crazy or violent, especially those who knew him best, such as his wife and Ruth Paine, who allowed him to sleep in her home the night before the assassination. Those who knew Oswald in Russia also say that he never exhibited any signs of being mentally unstable.

If told before the assassination that the President was to be killed by an assassin motivated by conviction, most people would assume that the killer would be right-wing fanatic, not a left winger, as Oswald is generally portrayed.

When Secretary of State Dean Rusk, aboard the Cabinet Plane over the Pacific, was told the President was killed by a leftist, he said that the ramifications of this would be felt for decades, and indeed they are still felt today.

Although the Warren Report did not attribute a specific motive for the assassination, it certainly pushes conviction as the most likely motive for Oswald, “He sought for himself a place in history” the Warren Report tells us, but this motive doesn’t fit since Oswald denied the deed. Oswald denied killing anyone, and claimed he was a “patsy” - someone set up to take the fall for a crime he didn’t commit.

If Oswald was the Patsy, and not the actual assassin, then speculation as to his motives are useless, and something that I deal with extensively in the essay on Oswald’s motives [See: Olwald’s Motives article].

If elimination of the President was the motive for killing him, then the investigation, according to homicide handbook, must be approached in a special and different way – from the top down.

When the answer to a persistent problem remains elusive after many attempts to solve it, a different and fresh approach from a different angle must be tried, and that’s what I thought of when I read of Larry Hancock’s approach to the assassination - “from the top down,” as that is the same approach that the homicide handbook calls for in the case of murders where elimination is the motive.

The Detection of Murder-A Handbook (p. 92-97) says that where Elimination is the motive, it is not the suspect but the victim who leads to the perpetrator of the crime.
“Removal of the person who happens to be ‘in the way’ is the determining factor in a great number of murders. In the true elimination murder the continued existence of the victim is inconvenient or dangerous to the killer.”

President Kennedy was certainly inconvenient to some and dangerous to others, and elimination is certainly a valid avenue of inquiry in is murder if only because no other motive could be established for his accused assassin, and if Oswald was, as he claimed to be, a “patsy,” then JFK was killed by other, professional assassins who go unpursued.

The handbook on homicide says that in almost every known case, murders motivated by elimination are carried out by professional “hit men,” who are hired by the actual perpetrator. “Professional killers do not usually kill for any other motive than elimination,” Weston and Kessler say, and “Murder is the method of discipline among the gangs of the organized underworld. It is also a regular technique of such business.”

Elimination killings they say, “are difficult to unravel. A body is found and police know several people who would profit from the elimination of the dead man, others who may have threatened to ‘get him,’ and some who may have thought of him as a man that ‘has to go.’ However, in over 90 percent of these killings the persons who have the motive for the killing never handle the gun that fires the fatal shots, nor drive the car that may be used in the killing. They are involved in the conspiracy and are guilty of murder because they procured the ‘trigger men’ who did the actual killing, but they have an alibi to prove they were many miles away from the scene of death at the time of the homicide.”

“There are few witnesses” in elimination killing, “and fewer that are willing to testify, and even this number is reduced by murder when it becomes known they are willing to ‘finger’ the killer.”

“The actual killers are not local boys, but are imported from some other town to do the killing. They return home as soon as the ‘job’ is completed. Cars are sometimes observed leaving the scene of a killing but later investigation shows the car to be stolen at one section of town and the registration plates stolen from still another neighborhood. And even when a suspect is picked up and viewed by the victim, if still alive, it’s generally a case of shake of the head or a curt, ‘never saw the guy before.’”

“There are few witnesses, fewer that are willing to testify, and even this number is reduced by murder when it becomes known they are willing to ‘finger’ the killer.”

Instead, consider the level of responsibility, from the triggerman, the get-a-way driver, the ‘button-man’ who eliminates the ‘stool pigeon,’ and the ‘bag man’ who pays off in cash, the ‘buffer’ who insulates them all from each other, to the ‘inside man’ who puts in the fix with the cops, the guy who gave the order to kill is pretty well protected by layers of insulation.

Covert operations operate pretty much the same way as the organized crime hit-man, except they use a different terminology - as a “cut-out” is used instead of a “buffer,” and things are done on a “need-to-know” basis.

As the Detective’s Handbook explains, in the case of murders where elimination is the motive, “One of the important factors in the initial investigation is to reconstruct the last hours, even the last days, of the deceased. Who saw him last? Whom did he eat his last meal with? Who spoke to him over the telephone in his last hours. Where he went and what he did in the period preceding death are what must be reconstructed. And it is the reconstruction of this period that most often reveals the true facts surrounding unexplained and unexpected death.”
Posted by William Kelly at 4:03 PM