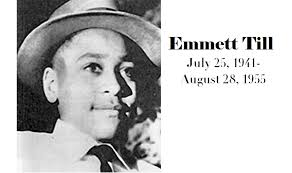 HIGHTSTOWN NJ. Unresolved hate crimes like the racially motivated murder of black Chicago teen Emmett Till, who was abducted, beat down and shot to death during a family visit to Mississippi in 1955, have inspired a group of Hightstown High School students to lobby Congress into action.
When Midwest Congressman Bobby Rush (D-Illinois) introduced the Civil Rights Cold Case Record Collections Act of 2017 into the U.S. House of Representatives on March 1, the bill was actually ghostwritten by roughly three dozen Hightstown students.

The junior and senior students then persuaded Democratic U.S. Rep. Bonnie Watson Coleman, who represents Hightstown, to get on board as a co-sponsor, and they also visited Republican offices in the nation’s capital in hopes of building bipartisan support for a measure they hope to see signed into law.

“And there are still families of civil rights victims that know nothing about what happened to their relatives; you don’t know where the bodies are buried,” Johnson said, “and I feel like the anger and the suffering of the past will always bleed into the future if they have never been dealt with. So personally for me, that is a huge motivation to get this bill passed and do something for these families and to acknowledge what happened.”

The U.S. Department of Justice, fueled by the bipartisan Emmett Till Unsolved Civil Rights Crime Acts of 2007 and 2016, has a mandate to “support the full accounting of all victims whose deaths or disappearances were the result of racially motivated crimes” committed before 1980 and to “hold accountable under federal and state law all individuals who were perpetrators of, or accomplices in, unsolved civil rights murders and such disappearances.”

But the Justice Department in its sixth annual report to Congress, a nine-page document dated May 2015, said it had concluded its investigation into 105 of 113 cold cases involving 126 victims and conceded that “very few prosecutions have resulted from these exhaustive efforts.”

A private citizen seeking to obtain federal documents related to civil rights cold cases would have to file a Freedom of Information Act or FOIA request, which commonly takes longer than a year for the government to process and oftentimes ends with the government providing documents that are heavily redacted in black ink, making the furnished record almost useless.

The Justice Department’s inspector general in September 2013 released an 83-page audit on the department’s internal controls and “found several documents in which unclassified information was inappropriately identified as being classified.” The report suggests the 9/11 Commission, Congress, and the White House have all recognized that the over-classification of information has several negative impacts, including the fact that it “needlessly limits stakeholder and public access to information.”

The Hightstown students say private investigators would more easily be able to solve civil rights cold cases if they had the ability to easily obtain minimally redacted federal cold case files in a timely manner. Their bill is currently sitting in the U.S. House Committee on Oversight and Government Reform for possible consideration.

The bill aims to establish a single collection or repository containing civil rights cold case records that can be easily obtained by the public in a timely fashion and without significant redactions.
In March 2011, expert open government advocate John Verdi testified before the House’s Oversight and Government Reform Committee and said he believes “over-redaction is a real problem” regarding how the federal government commonly releases heavily redacted documents in response to public record requests. “I think it is an even larger problem for FOIA requesters who have less legal expertise and are less able to challenge those redactions in the administrative process and the litigation process,” he said.

A racially motivated bombing that rocked an Alabama black church in the 1960s took years before prosecutors won any convictions, but even then, Hightstown students have recently obtained FBI documents on the deadly incident that are almost completely blacked out with redactions.

By unanimous consent, students in Stuart “Stu” Wexler’s Advanced Placement or AP government and politics Hightstown High class during the 2015-16 and 2016-17 schoolyears crafted their legislation specifically to provide for the expeditious disclosure of records related to civil rights cold cases. Their bill is modeled after the President John F. Kennedy Assassination Records Collection Act of 1992, which mandated that all assassination-related material be housed in a single collection in the National Archives and Records Administration, also known as NARA.

“We felt that our bill can work in conjunction with the Emmett Till 2 Act, because it actually has some weaknesses that we’ve noticed that have actually limited the ability of success or limited the ability of the release of documents by the DOJ or the FBI or units like that,” Hightstown High senior Dhruv Samdani said. “So we felt that our bill would help actually lessen the redaction or erasing or blacking out of material so that more investigative reporters could actually get the material necessary to actually solving these cases.”

A Mississippi jury found two white men not guilty of murdering 14-year-old Emmett Till. J.W. Milam and his half-brother Roy Bryant later gave a magazine interview admitting they had killed the black boy. No one has ever been convicted in the case, but the U.S. Justice Department this month has suggested it may reopen its investigation into the Emmett Till slaying.

Several members of the Ku Klux Klan killed four black girls on Sept. 15, 1963, when they set off an explosion at the 16th Street Baptist Church in Birmingham, Alabama. Robert Chambliss was convicted of first-degree murder in 1977 and died in prison; Thomas Blanton was found guilty of first-degree murder in 2001; and Bobby Frank Cherry was found guilty in 2002 and died in prison about two years later.

Six hours after the KKK-planted bomb exploded, 16-year-old black boy Johnny Robinson was shot and killed by white Birmingham Police Officer Jack Parker. More than 50 years later, Robinson’s slaying still remains unresolved, with the Justice Department reviewing the incident in accordance with the Emmett Till 1 Act but closing the matter on April 9, 2010, without initiating any prosecutions.

New Jersey Republican Congressman Chris Smith in recent days has declared he will co-sponsor the Hightstown students’ bill, which would make him the first GOP member and fifth congressional representative to officially get behind the proposed legislation as a formal co-sponsor.

“The Department of Justice Cold Case Initiative, operating with guidance from the Emmett Till Unsolved Civil Rights Crime Act, has begun the important work of cataloging, analyzing and targeting civil rights cold cases,” Smith said Thursday, April 13, in a statement. “I am pleased to co-sponsor this new bill (H.R. 1272) — originally proposed by the AP government Hightstown High School students — as a means to prompt additional action and help secure justice for the victims and their families.”

When Stu Wexler polled his AP students to see if they would be interested in drafting legislation seeking to increase the likelihood of civil rights cold cases being solved during the 2015-16 schoolyear, he said he did not imagine the endeavor would eventually make serious inroads with the lawmakers on Capitol Hill.

Wexler, a longtime social studies educator who has published books on civil rights cold cases, said he is “incredibly proud” of his students’ efforts. He said their proposed legislation promotes “a cause that I think every American can get behind and relate to,” which is to try to bring justice to the criminals who have long gone unpunished for committing hate crimes and to help bring closure to the victims’ families who want to see civil rights cold cases solved.

“The students all know that the committee is the key; 95 percent of bills die in committee,” Wexler said. “(Utah’s U.S. Rep.) Jason Chaffetz, the goal is to try to get him to put the bill on the committee’s agenda. We believe it is a bipartisan bill, and the students have been working very hard.”

Chaffetz presides over the House Committee on Oversight and Government Reform as its chairman. Hightstown High junior Jasman Singh and several of his classmates recently met with a congressional staffer who reports directly to Chaffetz. “A lot of the discussion was centered around the cost of the bill,” Singh said, “because in this Congress they are trying to cut down the budget and crack down on big federal government, so a lot of what he told us was, ‘If you can get something underneath $500,000 in this Congress, it is basically considered free.’ So that’s what he told us about costs and appropriations.”

If the bill became law, it would create an independent agency known as the Cold Case Records Review Board that would be composed of five members appointed by the president of the United States. The bill would require all nominees on the review board to be “distinguished persons of high national professional reputation in their respective fields who are capable of exercising the independent and objective judgment necessary to fulfill their role in ensuring and facilitating the review, transmission to the public, and public disclosure of files related to cold cases and who possess an appreciation of the value of such material to the public, scholars, and government.”

“The primary cost of this bill is basically computerizing the records and digitizing them,” Singh said, adding that there are perhaps hundreds of thousands of federal civil rights cold case documents and that placing them into a digital collection with minimal redactions “could potentially cost less than $1 million a year.”

“I’ve met with some Republican congressmen,” said Hightstown High senior Lydia Francoeur, “and a lot of the universities in a lot of Southern states, they are really active with civil rights cases, and that’s where most of the cases took place, so they usually are really receptive to our bill.”
Another senior student, Renuka Kannan, said the key to success is getting Republicans and Democrats on board.

“I think that as long as we have enough bipartisan support of co-sponsorship,” she said, “it should hopefully get through the House at least, because of the fact that it is such a bipartisan issue dealing with civil rights cold cases, which everyone should have common interest in supporting.”
If the legislation stalls in Congress, the Hightstown students said they intend to keep pushing for its passage in the months or years ahead, if that’s what it takes to get the measure enacted into law.

Sulaiman Abdur-Rahman has been working as a professional journalist since graduating from Temple University in 2007. Prior to his current stint at The Trentonian, Abdur-Rahman worked at The Philadelphia Inquirer and wrote a self-published memoir about his 12-month experience of living in Australia on a spouse visa. Reach the author at sulaiman@trentonian.com or follow Sulaiman on Twitter: @sabdurr.

Posted by William Kelly at 8:50 AM