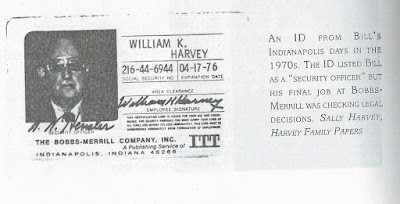 "The CIA was represented (at the 1961 conference at NSA HQ) by Jim Angletion and a bull-like man named Bill Harvey, who had recently returned to Washington to run Staff D, after running the Berlin Tunnel operation."

"Harvey was already a living legend in the CIA for his hard drinking and his cowboy manners. he began his career handling Soviet counter-espionage for the FBI, until Hoover sacked him for drunkenness. He promptly took his invaluable FBI knowledge and put it to work for the fledgling CIA, becoming along with Angleton one of the most influential American operators in the secret war against the KGB. Through most of the 1950s he served in Berlin, running agents, digging tunnels, and taking the battle to the Soviets wherever possible. for him, the Cold War was as real as if it had been hand-to-hand combat. But for all his crude aggression, Harvey was smart, with a nose for a spy. It was he who first fingered Philby in the USA after the defection of (British-KGB double-agents) Burgess and Maclean. Harvey had amazing recall for the details of defections and cases decades before, and it was he, before anyone else, who put together the contradictory strands of the MI6 man's career. While others paused for doubt, Harvey pursued Philby with implacable vengeance, and the incident let him with a streak of vindictive anti-British sentiment."

When William Harvey asked Peter Wright what the British would do with Castro he replied:

"I said that we would try to develop whatever assets we had down there - alternative political leaders, that kind of thing."

"'We've done all that,' said Harvey impatiently, 'but they're all in Florida. Since the Bay of Pigs, we've lost virtually everything in the area, in view of the British colonial presence in the Caribbean.'"

"How would you handle Castro?" asked Angleton.

"'Would you hit him?' interrupted Harvey."

"I paused to fold my napkin. Waiters glided silently from table to table. I realized now whey Harvey needed to know I could be trusted."

"'We'd certainly have that capablility,' I replied, 'but I doubt we would use it nowadays."

"We're not in it anymore, Bill. We got out a couple of years ago after Suez. At the beginning of the Suez Crisis, MI6 developed a plan, through the London Station, to assassinate Nasser using nerve gas. (Prime Minister Anthony) Eden initially gave his approval to the operation, but later rescinded it when he got agreement from the French and Israelis to engage in joint military action. When this course failed, and he was forced to withdraw, Eden reactivated the assassination option a second time By this time virtually all MI6 assets in Egypt had been rounded up by Nasser, and a new operation, using renegade Egyptian officers, was drawn up, but it failed lamentably, principally because the cache of weapons which had been hidden on the outskirts of Cairo was found to be defective."

"Nerve gas obviously presented the best possibility, since it was easily administered. They told me that the London Station had an agent in Egypt with limited access to one of Nasser's headquarters. Their plan was to place canisters of nerve gas inside the ventilation system, but I pointed out that this would require large quantities of the gas, and would result in massive loss of life among Nasser's staff. It was the usual MI6 operation - hopelessly unrealistic - and it did not remotely surprise me when...Eden had back away from the operation."

[Editor's Note: At the time of the Suez Crisis Prime Minister Anthony Eden was on vacation in Jamaica, a guest at "Goldeneye," Ian Fleming's north shore beach house at Orcabessa, Jamaica.]

"'We're developing a new capability in the Company to handle these kinds of problems,' explained Harvey, 'and we're in the market for the requisite expertise.'"

"Whenever Harvey became serious, his voice dropped to a low monotone, and his vocabulary lapsed into a kind of strangled bureaucratic syntax beloved of Washington officials. He explained ponderously that they needed deniable personnel, and improvised technical facilities - in Harvey jargon, 'delivery mechanisms.'"

"We turned off the freeway onto a meandering country road, and after driving through a small wooded area and rounding a short bend in the road, we got our first view of CIA Headquarters....A few minutes later we were standing in the cavern-like, marbled-columned reception lobby of the main building...Our guide appeared and gave us security identification badges, then took us to the basement of the building in a section identified as the Cuban Operations Center." (aka Task Force W).

"Whatever the CIA's role in national policy towards Cuba, it all began and ended within the confines of those walls. Somehow, I expected frantic activity, as at a military operations center, bu it was very quiet, and most of the desks were deserted, even though the Cuban section was in operation 24 hours a day."

"Colonel Bond introduced Rod (Edward Roderick) and me to various people, by first name only....We were first taken to a plush first floor office and introduced to the head of the Cuban desk, Mr. Des Fitzgerald, who hurriedly but cordially welcomed us. Then we were escorted to an adjacent office and introduced to Mr. William Harvey and Mr. James O'Connell, both of whom exhibited an unmistakable air of authority. After a brief pep talk about our mission, they intimated that we would eventually be going to Miami to work directly with the Cuban exiles, but they gave no details. I couldn't help noticing Mr. Harvey carried a large holstered pistol on his waist, visible under his sports coat."

In Florida, Bradley Ayers writes: "On the way down U.S. 1, I stopped at the Green Turtle Inn in Islamorada for a bowl of soup. It was early afternoon and most of the lunch crowd had left. But near the back of the restaurant, seated at a large circular table, were Dave Morales, Mr. Harvey, Gordon Campbell, Mr. (David Atlee) Phillips, and another man, possibly (John) Rosselli, whose back was turned to me. They apparently stopped for lunch and drinks. I don't know if they recognized me or not. As was the practice in such situations within the agency, there was no acknowledgement either way. Discreetly, I got my soup and left. It was the first time I had ever seen the station hierarchy in the Keys and out of their air-conditioned offices."

"(Rod) didn't know about my trip to Cuba, and he couldn't fully understand my concern about the exiles and the morality of the whole situation. Nevertheless, we'd discuss our thoughts for hours at a time, usually over a bottle of scotch, in his motel room or mine. Rod described an interesting new guy, a Colonel Rosselli from Washington with whom he was working in operations."

According to Ayers, Rosselli's team of Cubans operated out of a safehouse at Point Mary, where Roderick trained the Cubans in demolition and sniper marksmanship.

(p.52) Ayers: "Rod had been drinking before he got to the house that night. In fact, he confided, he and the recently arrived Colonel Rosselli were working on plans to ambush Fidel Castro and he had been on a weekend binge together. They'd become close friends as they spent their time together; their drinking friendship was a natural extension of their on-duty relationship."

"Rod began to tell me about the new things 'in the air' at the station. It seemed that the administration was ready to begin making an even more concerted effort to unseat Castro....The Special Group had already removed a number of targets from the restricted list, and there were more to go. It was up to the CIA, specifically the Miami station, to plan the new missions, recruit and train exiles, and mount operations to strike the Communist dictator where it really hurt. Other espionage activities were being carried out to coincide with this paramilitary effort, and still more attempts to eliminate Castro were being devised. Then he dropped it. He told me Rosselli had high level Mafia and Havana connections..."

"(Rod) volunteered that in his present work with Rosselli, (David) Morales was directly calling the shots and that Rosselli and Morales were obviously very close."

After leaving the CIA, his last posting as chief of station in Rome, William Harvey returned to his native Indianapolis, Indiana to work for Bobbs-Merrill, a major book publisher. Although they mainly published school and legal texts, they also published a biography of Fidel Castro, reportedly solicited a manuscript on the Kennedy assassination from Professor Peter Dale Scott, and censored Bradley Ayers' first book "The War that Never Was," removing a number of names from the published version, including Ayers' superior officer at JMWAVE Gordon Campbell, who was responsible for all maritime operations.

Bobbs-Merrill also reportedly maintained offices on the forth floor of the Texas School Book Depository, as did a number of other major publishers who distributed books in Texas.