The National Museum of Intelligence and Special Operations - Reconsidered

The National Museum of Intelligence and Special Operations 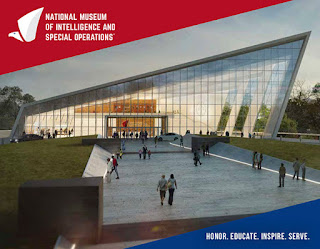 The new national museum of Intelligence and Special Operations – a $10 million showcase – should not just glorify such actions, but be an objective, academic institution that will point out the mistakes, destruction and loss of life that such covert actions have caused over the years, and put such activities in their proper historical perspective.

The development of intelligence as a key security responsibility was outline in detail thousands of years ago by Sun Tzu in his classic work “The Art of War,” which has a chapter on the use of secret agents. In it he explains how, when all five types of agents are working at once it is known as “The Divine Skein,” skin being a thread on a net – an intelligence network.

Such covert actions were considered “Divine” because they appear to be acts of God to those who don’t know how the magic trick works, but once you know, it’s not so mysterious at all.

After World War II President Truman disbanded America’s wartime spy agency - the Office of Strategic Services (OSS), and this museum is being funded by a $10 million grant from the OSS Society.

After the assassination of President Kennedy Truman wrote an essay in which he said that he didn’t think such covert operations should be a part of intelligence, which he said should focus strictly on collecting information rather than sabotage and subterfuge. Sabotage is a terrorist act of violence while subterfuge is the use of deceit to achieve one’s goal, neither acts of a gentleman, but used in all covert intelligence operations.

The history of such covert actions is fascinating however, beginning with Troy - the first historically documented covert op.

The Trojan Horse - After a fruitless ten year siege of Troy, the Geeks construct a huge wooden horse, and select a few good men – including Odysseus, to hide inside, and after the Trojans pulled the horse inside the city gates as a symbol of their victory, the first special forces emerged in a surprise attack that leads to victory.

The Intrepid explosion in Tripoli Harbor – September 4, 1804. Inspired by Decatur’s success, his friend Lt. Richard Somers sails the Intrepid back into Tripoli harbor outfitted as a fire ship to sail it into the anchored pirate fleet, but it explodes prematurely and kills Somers and his crew of 12 men. The three officers and ten seamen were buried on the Shores of Tripoli, where they remain today, despite repeated calls for their return and proper burial at home.

The Loss of Rangers at Anzio – An elite regiment of Rangers were parachuted deep behind enemy lines and captured a key town, but the main invasion force was bogged down on the beach because of the hesitancy of the commanders, and the entire Ranger regiment was killed or captured.

The Re-capture of Mussolini – After Italian dictator Bonito Mussolini was deposed and imprisoned in a remote mountain castle, Hilter ordered Otto Skorzeny to free him. Skorzeny flew into the castle with a team of commandos aboard gliders, captured the castle prison and freed Mussolini.

Operation Anthropoid - The Assassination of Nazi administrator Reinhardt Heydrich in Prague on May 27, 1942 in an attack on his car by two partisans trained by British Intelligence. The Nazi retribution for the assassination led to the execution of Bishop Gorazd after the assassins were killed in a firefight at the St. Cyril and Methodius Cathedral. Another 13,000 civilians were arrested and an estimated 5,000 were executed.
The Assassination plans to kill Hitler – MI6. A British plan for a sniper dressed in German military uniform, to kill Hitler as he walked through a garden field to a nearby tea house as he routinely did. The plan was not carried out because it was decided the war was going in the Allies favor because Hitler was making bad decisions, something the allies wanted him to continue to do.

The July 20, 1944 Valkyrie Plan to kill Hitler was devised by high ranking German military officers who didn’t want Germany totally destroyed. The plan was carried out by Colonel Claus von Stauffenberg at the Wolf’s Lair, in East Prussia, but the bomb failed to kill Hitler. The failure of the plot led to the executions of General Friedrich Olbricht, Colonel Albrecht Mertz von Quirnheim, Stauffenberg, the death of General Rommel and thousands of those suspected in cooperating or assisting the plotters.

Operation Success – The Guatemalan Coup of 1954 saved the United Fruit Company in South America,  was so successfully executed that President Eisenhower decorated the participants – including many of those CIA officers who went on to duplicate their success in Cuba in 1961 at the Bay of Pigs.

The Lionel Crabb Incident – UK – When the Soviet cruiser Ordzhonikidze delivered Nikita Khrushchev to London, Crabb dived into Portsmouth Harbor on orders of his MI6 controller to inspect the cruiser’s underside, and disappeared on April 19, 1956.

Bay of Pigs – The CIA backed invasion of Cuba at the Bay of Pigs by over a thousand anti-Castro Cubans, who were trained in Guatemala, resulted in the fiasco that killed many and imprisoned most of the invaders. The botched plan was ostensibly a covert operation, but even the invasion date was well known to many, including John Martino in a Cuban prison. While President Kennedy took responsibility for the failure, and was blamed for not supplying necessary air support, he no longer trusted the CIA,

Operation Mongoose – The post-Bay of Pigs, anti-Castro Cuban covert operations by the CIA, which included further development of plans to kill Fidel Castro.

Northwoods – the US military – Joint Chiefs of Staff – plan to fake a Cuban terrorist attack on Guantanamo  in order to instigate a reason for a full scale US military invasion of Cuba.

Cuban Missile Crisis – When the CIA’s National Photo Interpretation Center positively identified Soviet long range nuclear missiles in Cuba in October 1962, the Cuban Missile Crisis took the world to the brink of nuclear war over 13 days. Ignoring the Joint Chiefs of Staff unanimously recommended a military attack on Cuba to take out the missiles; President Kennedy instead initiated a secret backchannel communications with Soviet Premier Nikita Khrushchev that resulted in the removal of the missiles with the loss of only one life – that of an American U2 pilot shot down over Cuba.

The Houma Bunker Raid – A not very covert removal of arms, ammunition and demolition dynamite from the Schlumberger company bunker at Houma, Louisiana in 1961 by David Ferrie, Gordon Novel, Andrew Blackmon and others. The cache was to be given to the French OAS anti-DeGaul military men fighting to keep Algeria a French colony, or anti-Castro Cubans. Most of those involved in this raid, including Jean DeMenil, the head of the Schlumberger company in Texas, would know Lee Harvey Oswald and become entwined in the assassination of President Kennedy.

The 1962 attempt to kill deGaul by OAS military officers, failed to kill deGaul in an attack on his motorcade, but the French car’s French Michelin tires did not stop to car when they were shot out, and deGaul got away.

The covert coup in Vietnam on November 1, 1963 that led to the deaths of the Diems.

The Assassination of President Kennedy – November 22, 1963. In order to keep JFK from renewing diplomatic relations with Fidel Castro and joining the USSR in a joint effort to put a man on the moon, the US military and intelligence officers redirected one of the plans they had devised to kill Castro and instead killed JFK at Dealey Plaza.

Iran Contra – Many of those involved in the Dealey Plaza Operation went on to Nicaragua where they supported the Contras in their fight against the leftist Sandinistas who had taken over Nicaragua. In exchange for American missiles, Iran agreed to free captured American hostages and provide money to the American operatives and fund independent covert ops that didn’t need the approval of Congress.

Chile 1973 – the assassination of democratically elected president Salvador Allende in a CIA engineered coup d’etat that led to the deaths of many thousands of people and the establishment of a military dictatorship that lasted until 1989.

And unfortunately, there are dozens and dozens of other examples of key covert intelligence operations gone awry – which means deviating from the appropriate, planned or expected course of action.

I like the idea of a national center for the study of intelligence, security, covert operations, political assassinations and other such deep political events, but they can’t be glossed over like the Spy Museum, but instead need to be thoroughly and critically analyzed so we can be the informed citizens who control the government, rather than the government controlling us.

Now what we need is for some rich person with a conscience or a society or foundation like the OSS Society or Catherwood Fund to dedicated ten million dollars for a real Center for the Study of Political Assassinations and Covert Operations, based in Washington D.C., where all of the accumulated assassination records can be stored, scanned and put on line, and researches and writers in residence can work.