Case Study No. 10 - Richard Bullock - With Oswald at Atsugi 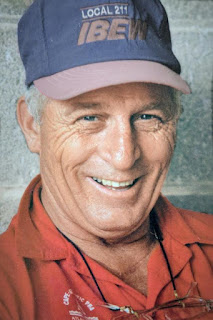 Bullock, Richard "Dick" A., - 80, of Somers Point, NJ went home to be with his beloved wife, and his Lord on Monday, April 8, 2019, surrounded by his loving family. Born in Atlantic City, NJ he was the son of the late Bart and Hazel (Orth) Bullock. Dick was a graduate of Atlantic City High School, class of 1956.

Following high school, he enlisted in the U.S. Marine Corps. After tours in Hawaii and Japan, Dick returned to the Atlantic City area and became an electrician for local Union 351 from which he retired. There, he met and married Paula and enjoyed 54 happy years of marriage together. Dick and Paula devoted their lives to each other, raising a family together and later in life, doting on 3 granddaughters, who were their pride and joy.

Dick had many hobbies throughout his life including playing the piano, fishing, boating, playing golf, dancing, and most of all spending quality time with friends and family. Birthdays and special events were celebrated with gusto, whether it be for a 1-year-old child or a 90-year-old great-grandparent. He was the life of the party and never missed an opportunity to dance with the love of his life, Paula. It was not unusual for Dick and Paula to be the last ones on the dance floor at closing time. During the summer months, his home and pool were open to everyone and was the gathering place for family and friends all season long. His irrepressible smile, zest for life, and effervescent personality made everyone feel comfortable, welcomed, and at ease in his presence. Dick was an enthusiastic member of Elks Lodge #2563, Marine Corp League Garden State Detachment #1273, Good Shepherd United Methodist Church in Northfield, VFW Post #2189, life member of AMVETS Post 911, Bones Fraternity Atlantic City High School, and Special Olympics.

He was always generous with his time and money, and never hesitated to lend a helping hand to anyone who needed it. He volunteered at the LPGA golf tournament for many years and donated his time to numerous charities. The Marine Toys for Tots was a favorite charity he participated in with his Marine buddies. It gave him such joy to sort and deliver the toys and to spread holiday cheer to less fortunate children. Another favorite charity was his Elks Lodge where he participated in fundraising events as well as being with good friends doing good work. As an Eagle Scout, he was a fine example of leadership to young and old alike. He enjoyed being a Chaplain, pianist, buyer, electrician, and bartender for various charities. He also helped organize the annual flag burning event held each year on Flag Day at the Elks.

Dick will be sorely missed and fondly remembered by his son, Dan (Erika) Bullock; granddaughters, Madelyn, Samantha, Jacqueline; and sister, Paula (Frank) Finnerty. In addition to his parents, he was preceded in death by his wife, Paula Jean Bullock; and brother, Daniel B. A. Bullock. Relatives and friends are respectfully invited to attend Dick's Life Celebration Funeral Service on Saturday, April 20, 2019, at 11:00 am at Jeffries and Keates funeral home, 228 Infield Ave., Northfield, NJ. A visitation will be held at Jeffries and Keates on Friday night from 6:00-8: 00 pm and on Saturday at 9:00 am until the time of service. Burial will be at Atlantic City Cemetery on Wednesday, April 24, 2019, at 10:00 am. Donations may be made in Dick's memory to Toys for Tots at https://atlanticnj.toysfortots.org. To pay respects, leave condolences, or share your fondest memory of Dick please visit www.jeffriesandkeates.com. Services have been entrusted to Jeffries and Keates Funeral Home 609-646-3400.

BK NOTES: I met Dick at an Elks Lodge barbeque and thanked him for his service in the USMC. When he mentioned being stationed at Atsugi I asked if he knew Oswald and he said of course he did. They used to throw the football around in the skivies while off duty. One thing Bullock said was Oswald spent more time in the Communications Shack than at the radar.

Here's the story I wrote in 2003  for the Ocean City Gazzette where I was working at the time.


With Oswald at Atsugi.

EGG HARBOR TOWNSHIP ELK OF THE YEAR WAS OSWALD’S BUNKMATE

Richard Bullock, the 2003 Elk of the Year of the Egg Harbor Township, New Jersey Lodge has a unique claim to fame – he was once a marine corps bunkmate of Lee Harvey Oswald, the accused assassin of President Kennedy. And he has some questions about Oswald’s identity, as he doesn’t believe the guy Jack Ruby killed in Dallas is the same person he knew as “Ozzie” in Marine Air Control Squadron One in Japan.

Born in 1938 on November 10th, the same day the U.S. Marine Corps was founded at Tun Tavern in Philadelphia, Bullock, like Oswald, tried to enlist before he was 17 but was turned away, only to officially sign up on November 28, 1955. As he later learned, Bullock followed Oswald around to the same duty stations, only a few months behind him – Kessler AFB in Beloxi, Miss., then Jacksonville, Florida for aviation training, El Toro in California before Atsugi, Japan, where he served from November, 1956 until February, 1958.

For a number of months his time at Atsugi overlapped with that of Lee Harvey Oswald, who Bullock said, “I knew him as L. Oswald, or `Ozzie,’ and he knew me from the name on my shirt: R. Bullock, but he called me `Dickie.’ We didn’t know each other’s real names, just what was on the uniform.”

Atsugi is not your normal military post. As a former Kamakazi pilot training center with deep underground bunkers, all of the major intelligence agencies maintained stations there from the end of World War II. Atsugi airbase was also the home of the U2 spy plane, which Bullock monitored on radar.

“I was a radar operator – MOS#6741, which is radar operator, but from what I recall Ozzie was a radio electronics operator. He was not in the radar section as much as he was in the radio communications end of our system.”

Asked if Oswald had access to information on the U2, which he could have passed on to the Soviets once he defected, Bullock said, “I can’t answer that. I didn’t know a thing about it other than watching what they did when it landed. And I didn’t know what his job with the U2 was other than visually watching it when it landed. People would run out on the runway and catch the wings, because it hadno wheels, just a wheel at the center and they had to hold it from tipping But that’s all we ever seen. If he knew more about it than I did, well I don’t know that. Like I say, he was at a different end of things than I was.”

They did share the same Atsugi bunkhouse though. “That was Marine Air Control Squadron One – MACS1 we called it, 75 men in our unit. I was there for 30 months, an extended tour…Oswald operated out of a tent that supplied all the power – the Communications Coordinates Operations Center, and I don’t know what else he did.  I worked out of radar operations. I did plotting, communications with the aircraft, we did different jobs, rotating shifts every hour.”

Atsugi , Bullock explained, is the name of the base that’s flanked by two towns – Sagomeoska on the Navy side and Yoma (spelled phonetically) on the Marine Corps side. Bullock doesn’t recall the Queen Bee nightclub that Oswald is said to have frequented, or the incidents where Oswald was reprimanded.
“I do know that when we went on liberty, he went his way and we went our way. He was a loner,” said Bullock, “but to be honest with you I don’t know where he went. The rumor had it that he had a `national’ women, and a `national’ to me in those days meant a Japanese women.”

Besides serving together at Atsugi, Bullock and Oswald were both involved in a major operations in the Philippines, where they landed in LSTs at Subic Bay.

As a person, Bullock recalls that Oswald, “was always smiling, always happy,” but he didn’t recognize Oswald when he watched him being killed by Jack Ruby in the Dallas Police department and on national television on November 24, 1963.

“He was NOT the guy I saw in the picture on TV shot by Jack Ruby,” Bullock says emphatically. Looking at a color mug shot of Lee Harvey Oswald taken shortly after he was taken into custody by the police, Bullock said, “It looks nothing like him. That’s not the man I knew.”

Bullock described the “Ozzie” he knew in the marines as being two or three inches taller, 40 pounds heavier, and a young man wore thick glasses.

Since Bullock didn’t know him as Lee Harvey Oswald, or recognize him on television, he didn’t put two-and-two together until he was contacted by Readers Digest editor Henry Hurt, who tracked him down through military records. Hurt wanted to know if Bullock had any photos of Oswald. “Sure I had photos,”

Bullock said, “pictures of me and Ozzie sitting around in our skivvies on a Sunday afternoon, throwing a football around, and stuff like that. But it was all lost in a divorce when I moved.” Nor has Bullock been questioned by the FBI or any government investigators.

While Bullock didn’t recognize any of the names of the marines who also knew Oswald at Atsugi, he said, “I’ve looked in the various veterans magazines for reunions of any MAC squads, but I haven’t seen any. The guys I was close to have already passed away, and I never had a reunion with any of them.”

Not aware of the books written about individuals impersonating Oswald, such as Professor Richard Popkin’s “The Second Oswald,” or the idea that there were actually two Lee Harvey Oswalds, a theory advanced in  John Armstrong’s new book “Harvey & Lee,” Bullock expressed surprise. “You mean I’m not fantasizing?!”

Armstrong’s How the CIA Framed Oswald,” mentions Dick Bullock in a footnote to the profusely documented text that claims that two men – Harvey and Lee, were reared and trained from an early age and their identities merged over a period of years leading up to the assassination, much like Leon Trotski’s assassin Raymond Mercader was fashioned by the KGB.

Dick Bullock doesn’t know what it all means. The way he looks at it, when you live with a guy, work beside him for weeks and months at a time, you get to know him, and the guy Jack Ruby killed in Dallas wasn’t the “Ozzie” he knew in the marines.