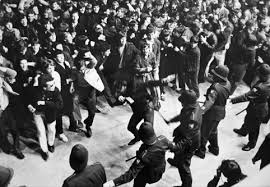 “And I went down to the demonstration, to get my fair share of abuse. Singing, ‘we’re gonna vent our frustration, if we don’t we’re going to blow a fifty amp fuse.’” – Rolling Stones “You Can’t Always Get What You Want.”

Rolling Stones You Can't Always Get what you want - Google Search

“Everywhere I hear the sound of marching, charging feet, boy. Because the summer’s here and the timing is right for fighting in the street boy.  What can a boy boy do except sing in a rock and roll band?”  - Rolling Stones “Street Fighting Man” – 1968

These uncertain, isolationist but revolutionary times have sparked a number of personal flashbacks that may give a window into how these things have played out before.

After working as a seventeen year old high school student volunteer coordinator for the McCarthy for President campaign in 1968, we knocked LBJ out of the race in New Hampshire. I then went to the Democratic National Convention in Chicago to work on the national staff. I was not a street protester, but a “clean for Gene” guy in sports coat and tie with an official position on the national staff. I got there early and was assigned to a group called “Special Projects,” who were responsible for doing anything that didn’t fall into another committee’s assignments. They even took our picture and put it on a laminated ID card.

Everywhere I went there were signs that read "Welcome to Chicago - Richard J. Daley Mayor."

I have since learned that McCarthy’s anti-Vietnam war campaign was heavily supported by a number of disenchanted CIA officers, including the advance man who brought McCarthy to Atlantic City to address the NAACP convention that refused to let him speak, and the guy who ran the Special Projects committee in Chicago that I was a part of. One of our assignments was to get extra floor passes for celebrities like Paul Newman to go down on the floor to talk to voting delegates. And because there were no telephones on the floor of the Convention, we were to set up some communication link.

While some high tech guys devised a communications link by disassembling an IBM Selectric typewriter so the keyboard was off the floor and via a wire ran to the print out part that was placed under a covered table near the wall of a friendly delegation. They had solved that problem, and it came in handy when riots broke out on the street – and while Julian Bond was speaking, he was handed a short message from that machine and stopped the convention until they learned what was happening on the streets.

I helped solve the floor pass problem by standing outside and trying to figure out how to get in using my Camden street kid instincts. Delivering a pizza wouldn't work though there's always a way around the tightest security.

When a McCarthy delegate walked passed to go to lunch, I got an idea. I showed him my Special Projects credentials and he lent me his floor pass for one hour. I used it to get onto the floor, and looked up into the gallery, saw my boss, the head of the Special Projects unit, and waved to him. He waved me up to tell him how I got there, and before long we were shuttling floor passes back and forth between delegates and those we wanted to get on the floor, including Paul Newman.

When I went back to my hotel, the Conrad Hilton, ground zero for the protests and riots, I tried to get past the crowds and lines of police in riot gear, and all hell broke loose. People were pushed into the giant plate glass windows at the front of the hotel and they came crashing down on everyone. Then the cops let loose with the tear gas, and your eyes swell, tears run and  you throw up. Then the cops started beating everyone with nightsticks. I helped a young girl up and ushered her into the hotel lobby, where I was allowed to go because I had a McCarthy pass. Up on McCarthy’s floor – the 18th, we looked out the windows as night fell and mayor Daley ordered Lincoln and Grant Parks closed, so the police formed a line and walked through beating the protesters as they moved. Eventually the national guard were called in, and lines and lines of jeeps with wire mesh bumpers and trucks full of soldiers came in to support the police. They were almost a relief, as the police went crazy, the national guard just stood there with their guns, that some girls were putting flowers in their barrels. 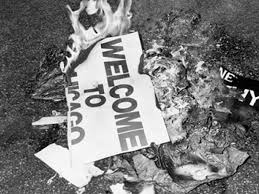 One guy climbed a street lamp where he replaced "Welcome to Chicago" with Welcome to Prague, as Soviet tanks were rumbling into Czechoslovakia at the same time.

The last night of the convention, after we had lost everything, I sat on the floor in the hall of the 18th floor and listened to Phil Ochs play guitar and sing sitting across the hall from me. Someone handed me a glass of whiskey on ice that I drank just before the tear gas came whiffing through the windows and down the hall.  Then the police came off all four elevators and began to attack everyone. I got hit on the head and arrested, but a delegate from my home, Angelo Erricattii – later mayor of Camden and convicted in ABSCAM, bailed me out. The cops took my wallet, money and plane ticket home. I got sick, and now, every time I smell whiskey, it all comes rushing back, and makes me sick all over again.

I went to McCarthy’s room at the hotel and poet Robert Lowell answered the door before McCarthy himself appeared. I explained my situation and said I needed $50 for my plane fare home, and Lowell gave it to me.

Years later my mother played bridge with McCarthy’s personal secretary and she gave me his home phone number and we had a nice chat shortly before he died.


It was around the same time – 1968 was a revolutionary year, that Martin Luther King was killed, and despite his pleas for non-violent protests, - as exhibited in his Cape May speech before a Quaker conference, the people rioted.

Robert Kennedy was giving a speech at the time King was killed and when notified he gave the announcement to the crowd, put aside his prepared speech and gave another one to quell the expected violence.

While I was not in Camden at the time, my father had to drive his police car to get my grandmother out of her house in North Camden before they burnt it down. And she lost everything.

At the same time, a young black girl – Elizabeth Ray, was a caretaker at the Camden home of poet Walt Whitman, and she stood out in front of the historic house with a broom stick and swung it at any rioter that dared come near Whitman’s house, so it is one of the few in that neighborhood that still stands. God Bless Elizabeth Ray. There will be an historic preservation award named after her someday.


Then in May 1970 I had just finished my freshman year at the University of Dayton, Ohio and was hitchhiking around Europe with a backpack when word of the Kent State shootings sparked student takeovers of practically every university in Europe. France as already on a general strike, and I was in Germany, so I walked to the University of Frankfort and was surprised to see students with rifles guarding the gates. They weren’t playing around.

I showed them my student ID and they saw the word “Ohio,” and let me in. I went to a restaurant and ordered a steak, and before long a number of other students came in and sat down with me. They introduced me to one leader as “Danny the Red,” who I later learned was a major player in revolutionary action in Europe, also known as Daniel Cohn-Bendit, now a German politician.

Unfortunately he didn’t speak English and I didn’t speak German so we had trouble communicating, but I got the idea he was impressed with my Ohio student ID, asked me about Kent State, and was suggesting we coordinate student protests activities, but nothing ever came of it.

Then I went to Ireland and while walking on a remote backroad near Cork I came upon an historical marker covered with weeds that read: "Here is the home of the family of Richard J. Daley - Mayor of Chicago." Ha.

We now know that the national guardsmen at Kent State were ordered to return fire after they were fired upon by an armed, undercover police informant who had tried to infiltrate the ranks of the protesters.

And now I see the protesters on TV turn into full fledged riots, and see mainly young, white students, many young girls, and couples holding hands, and wonder if they are dating protesters?

"Hey, I think it's time for a Palace Revolution! But where I live the game to play is by Compromise Solution."  - Rolling Stones YCAGWYW

In any case, I am having these flashbacks to Chicago, Camden and Kent State, and it makes me sick, again.

Posted by William Kelly at 8:50 AM