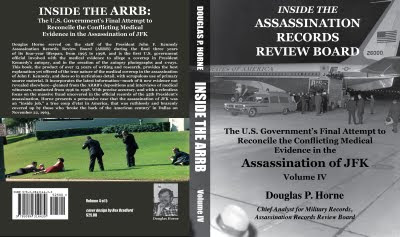 Inside the Assassination Records Review Board: The U.S. Government's Final Attempt to Reconcile the Conflicting Medical Evidence in the Assassination of JFK (Volume 4) (Paperback)
~ Douglas P. Horne (Author)
No customer reviews yet. Be the first.
Price: $25.00 & this item ships for FREE with Super Saver Shipping. Details

Product Description
VOLUME 4 of 5: Douglas Horne served on the staff of the President John F. Kennedy Assassination Records Review Board (ARRB) during the final three years of its four-year lifespan, from 1995 to 1998, and is the first U.S. government official involved with the medical evidence to allege a coverup in President Kennedy's autopsy, and in the creation of the autopsy photographs and x-rays. This book, the product of over 13 years of writing and research, provides the best explanation yet offered of the true nature of the medical coverup in the assassination of John F. Kennedy, and does so in meticulous detail, with scrupulous use of primary source material. It incorporates the latest information-much of it new evidence not revealed elsewhere-gleaned from the ARRB's depositions and interviews of medical witnesses, conducted from 1996 to 1998. With precise accuracy, and with a relentless focus on the massive fraud uncovered in the official records of the 35th President's assassination, Horne presents a persuasive case that the assassination of JFK was an "inside job," a true coup d'etat in America, that was ruthlessly and brazenly covered up by those who 'broke the back of the American century' in Dallas on November 22, 1963.

About the Author
Douglas Horne served on the staff of the President John F. Kennedy Assassination Records Review Board (ARRB) during the final three years of its four-year lifespan, from 1995 to 1998, and is the first U.S. government official involved with the medical evidence to allege a coverup in President Kennedy's autopsy.

Doug Horne’s Inside the Assassination Records Review Board (IARRB) is the most important book to be published on the assassination of President Kennedy in decades, not only because it changes the way we look at that murder, but in showing how the remaining issues can be resolved by determining the truth.

All the debates end here, and the arguments are replaced with questions that were posed but not answered when the Assassination Records Review Board was alive and ostensibly overseeing the declassification and release of the government's JFK assassination records. Many of the questions weren't even asked because the ARRB failed to fully use its power to subpoena witnesses and take the sworn testimony of witness.

As Horne, the chief analyst for military records explains, "While the Review Board had the power to subpoena witnesses and grant immunity, the subpoena power was used sparingly (with a limited number of medical and CIA witnesses), and the immunity power was never exercised. The reason: none of the Board Members were convinced there was any conspiracy or coverup, and therefore were only interested in clarifying the record in a few areas. At least the staff of the ARRB was permitted to conduct unsworn witness interviews without seeking permission from the Board Members. Sadly, senior staff members often elected not to even tape record witness interviews, which make the staff's written interview reports incredibly important as historical tools."

To its credit, the ARRB did manage to release millions of pages of documents, identified important records that are missing and others that have been destroyed, and they’ve called attention to those records that they deemed necessary to withhold until 2017, when the last classified secret JFK assassination record is scheduled to be released.

Now however, over a decade after the ARRB shut down, and years before the last record is released, we have a real good idea of what happened in Dallas, and in DC in the aftermath of the President’s murder. And with Doug Horne’s extremely detailed analysis of the military records, his conclusions are hard to avoid.

Supporting the general consensus that there was a conspiracy behind what happened at Dealey Plaza, Horne takes it a step further, and calls it straight and unambiguous – it was a coup d’etat, with those responsible for the murder taking over the government and changing policy. And lying all the way, but hey, after multiple homicides, the lying part is easy.

Building on the recent evaluations of the assassination that are in line with the Cold War history, crediting David Talbot’s “Brothers,” Jeff Morley’s “Our Man In Mexico” and Jim Douglas’ “JFK & the Unspeakable,” Horne surrounds JFK's story with the proper social frame work, and details how the evidence of a Dealey Plaza coup fits like a glove with the overall historical record.

Not only concluding there was a conspiracy, through his own personal journey, Horne takes the reader on a tour of the intestines of the coup and cover-up, from Dealey Plaza and Parkland Hospital, aboard AF1, from Andrews to Bethesda, and a few back alleys we haven't been down before. Along the way he consistently refers to important records and corresponding eye witness accounts, pointing out the contradictions and discrepancies, and sometimes resolving them. Thank God for small victories, and belittling the idea that "We'll never know." Now we can know.

While matching the volume of the work of his nemesis Vincent Bugliosi (at 2,000 plus pages), Horne’s IARRB basically dismisses Bugliosi’s only suspect, mentioning Lee Harvey Oswald only a few times throughout the five volumes, and each time only referring to him as the patsy who was framed for the crime. Rather than follow Ozzie the rabbit, Horne sticks close to the body, what one of his mentors, David Lifton refers to as the "best evidence."

A non-fictional forensic documentary "CSI Dealey Plaza," based on Horne’s book, will certainly make a most definitive and fascinating rebuttal to Bugliosi’s upcoming and lame "Distorting History" HBO series with Tom Hanks, but who will have the courage to make "Inside JFK's Forensic Autopsy and Coup?" It isn't pretty, and its hard to say which is more ugly - the gore of the brain and guts or the betrayal of the Constitution by those behind the coup.

Although Horne doesn’t know who shot John F. Kennedy in the back and in the head, he’s quite confident that the shot that killed the President entered the right front temple and blew out the back of his skull. This shot blew apart half the brain and created the Harper fragment and the wounds described by the Dallas doctors before the head wound was surgically altered, removing bullet fragments and enlarging the entrance to appear as an exit, before the official autopsy began.

It must have been earlier in the day, after Oswald was captured but before Air Force One landed at Andrews, when it was strategically decided not to follow the original Castro Commie cover-story, and go with the lone-nut scenario, a specific decision that precluded an assassin from the front and required the altering of wounds at Bethesda and all other evidence of a second gunman, including the Z-film.

It is from this attempt to disavow the existence of a shooter from the front, that the other lies had to be created, including the Lone-Nut lie to replace the Cuban Commie Rat cover-story that was supposed to have led to an invasion of Cuba, and the Z-film alteration that failed to uphold the first lie.

Horne nicely weaves the details of the crime and the cover-up with the overall historical situation, as well as his personal quest for the truth, one that most people can identify with, and follow, and reluctantly, but eventually coming to agree with his acute and well reasoned analysis, and in the end, his terrifying conclusions.

Volume IV, the first book to be released, contains two chapters - 13, "What Really Happened at the Bethesda Morgue (And in Dealey Plaza?)" and the nearly 200 page Chapter 14, "The Zapruder Film Mystery," which is probably the most controversial, but also contains the convincer.

Besides offering documentary proof and corresponding witness testimony to support this scenario, Horne also demonstrates conclusively that the Zapruder film was tampered with, constituting clear obstruction of justice for tampering with evidence. Unlike previous attempts to brand the Z-film a fake by unexplained anomalies, Horne takes a different approach, and utilizing the recollections of honorable and reputable CIA officials whose reputations should not be impeached, he demonstrates how the chain of possession was lost and the film altered. While he doesn't know exactly who did it, Horne tells you when and where it was done (KODAK’s Hawkeye Works, Rochester, New York) and how and why they did it.

Because the chain-of-evidence is broken and the provenance of the body and the Zapruder film are no longer certain, as Douglas Horne so conclusively demonstrates, a new legal mandate kicks in, and the rules of the game change.

Just as Oliver Stone’s “JFK” forced Congress to pass the JFK Act, Doug Horne’s book "Inside the Assassination Records Review Board" should embarrass Congress into holding JFK Act Oversight Hearings, force the convening of a Special Federal Grand Jury to investigate crimes related to the assassination, and require a new and proper forensic autopsy of the victim and our national security.

No fewer words could accomplish as much.

[ William E. Kelly, Jr. is co-founder of the Committee for an Open Archvies (COA) and COPA – the Coalition on Political Assassinations. He can be reached at bkjfk3@yahoo.com or at http://jfkcountercoup.blogspot.com/ ]
Posted by William Kelly at 11:19 PM