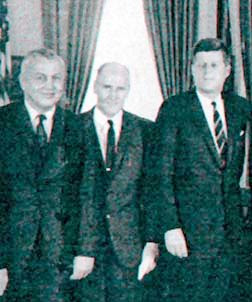 Art Lundahl is identified as the person on the left. Who is the person between him and JFK?

Arthur Lundahl, director of the top CIA photo lab in Washington D.C., seen here on the left was the man who discovered the missiles in Cuba and who briefed President Kennedy on the subject.

He was also, however, a man deeply interested in UFOs with a huge UFO library at home, and an active involvement with the subject for 25 years.

Lundahl was rumored to have been the briefer for three presidents on the subject of UFOs. He was involved with the photo analysis for the CIA Robertson, involved with the 1952 Washington flying saucer fragment that was sent to Wilbert Smith in Canada. He was also involved with the famous July 6, 1959 channeling of AFFA the alien at NPIC, where Lundahl and 6 other CIA employees watched a flying saucers fly by the window and sit above the capitol.

Arthur C. Lundahl, an aerial-photography expert whose detection of missile installations in Cuba in 1962 led to the Cuban missile crisis, died on Monday at Suburban Hospital in Bethesda, Md.

He was 77 years old and lived in Bethesda.

He died of respiratory failure, his family said.

Mr. Lundahl, an authority in aerial-photograph intelligence, was the founding director of the Central Intelligence Agency's National Photographic Interpretation Center.

Analyzing reconnaissance films, he briefed Presidents Dwight D. Eisenhower and John F. Kennedy as well as the nation's top military and diplomatic officials. Mr. Lundahl provided critical intelligence on the arms race and many other international crises, including those involving the Suez Canal; Quemoy and Matsu, islands controlled by Taiwan; Tibet; Lebanon, and Laos.

Early in his career he combined his academic training as a geologist with his hobby as a photographer to become an expert in deciphering the details of surface features in pictures and distinguishing natural features from those made by humans.

He developed his new skills during World War II while serving in the Navy, studying aerial photographs of targets in Japan and the Aleutian and Kurile islands.

When the war ended, he became the civilian chief of the Naval Photographic Center's Photogrammetry Division. In 1953, the C.I.A. hired him to organize its own aerial intelligence efforts, which were growing with the advent of high-resolution photographs taken from high-altitude U-2 airplanes. Later, space satellites further expanded the field.

Mr. Lundahl's discovery of the Cuban missile installations was a major feat in the annals of intelligence.

His findings, which he reported to President Kennedy at the White House, contradicted the expectations of political and military analysts. The information led Kennedy to impose a blockade on Cuba to cut off further arms shipments. Eventually the Soviet Union withdrew the missiles.

When Mr. Lundahl retired in 1973, he was given a Presidential medal and awards from the C.I.A. and Defense Intelligence Agency, and Queen Elizabeth knighted him. He was also a past president of the American Society of Photogrammetry.

Mr. Lundahl was born in Chicago. He graduated from the University of Chicago in 1939 and earned his master's degree there in 1942. He worked as a field geologist and park ranger.

His wife of 42 years, the former Mary Hvid, died in 1986. He is survived by a daughter, Ann Lundahl; a son, Robert Lundahl, and a granddaughter, all of Bethesda.

AN ALTERNATIVE HISTORY - AND THE UFO CONNECTION

A formerly SECRET report released under the Freedom of Information Act (FOIA) shows that CIA officials and consultants thought people seeing and reporting UFOs was more
dangerous than UFOs themselves, stating, "the continued emphasis on the reporting of these phenomena [UFOs] does, in these perilous times, result in a threat to the orderly functioning of the protective organs of the body politic.

" Another 'danger' cited by the CIA panel was that acknowledging UFOs could results in "...the cultivation of a morbid national psychology in which hostile propaganda could induce hysterical behavior and a harmful distrust of duly constituted authority."

To counter these supposed dangers, the CIA panel recommended a policy of "debunking" and education designed to persuade people that what they were seeing really wasn't there.

In explaining how this psychological warfare against the American people should be carried out, the report stated:

"The debunking aim would result in reduction of public interest in 'flying saucers' which today evokes a strong psychological reaction. This education could be accomplished by mass media such as television, motion pictures and popular articles"
The panel had further ideas on how what was essentially a disinformation program should be mounted, stating: "It was felt strongly that psychologists familiar with mass psychology should advise on the nature and extent of the program." The report went on to name certain psychologists who might be recruited to join the debunking project.

The formation of the CIA panel came about as a sort of compromise worked out by the National Security Council (NSC) after events in the summer of 1952. A major UFO flap had taken place across the country, highlighted by puzzling incidents in July 1952, when UFO intruders were simultaneously tracked on ground radar and observed by
jet interceptor pilots over the nation's capital, Washington, DC. The public, the press, and even President Harry Truman demanded to know what was going on. As a result, the US Air Force held a major press conference on July 29, 1952, the largest press conference since WW II, at which it was suggested the UFOs were temperature inversions--layers of warm air trapped under cold air that, by some giant stretch of the Air Force's imagination, were tracked on radar and seen as maneuvering flying craft by pilots sent aloft on scramble alert.

In August 1952, as documents released as the result of the FOIA suit filed by the author confirm, the CIA began reviewing the Air Force's handling of UFOs. Ransom Eng, an official with the CIA's office of Scientific Intelligence, wrote a report in which he characterized the Air Force's efforts as "scientifically invalid."
Armed with these criticisms, the CIA wanted to take charge of UFO intelligence [the collection and analysis of UFO evidence], and proposed, through CIA Director Walter Bedell Smith, that UFOs were much too serious of a matter to be left in the hands of the USAF. The National Security Council, however, would only approve a compromise
whereby a CIA-appointed panel would review UFO reports provided by the Air Force to determine if UFOs were a "direct, hostile threat to national security."

The struggle for power and funding between the U.S. Air Force and the Central Intelligence Agency had been on-going since 1947, the year the CIA was officially created and the Air Force became a separate service branch [after being part of the Army previously]. It would continue for decades thereafter throughout the Cold War with the Soviet Union, and include highly exaggerated Air Force Intelligence claims of Soviet bomber and missile superiority and 'first-strike' civil defense preparations, even though in 1955 the CIA gained somewhat of an upper hand with
the development and covert deployment of the U-2 high altitude spy plane--at least in the sense of getting the President's ear.

In January 1953 the CIA's Robertson Panel, mostly consulting scientists of the CIA's chosen to review the UFO evidence selected by the USAF, rejected the conclusions of the U.S. government's top photo analysts from the Naval Photographic Interpretation Center (NAVPIC), Anacostia, MD, Capt. Arthur Lundahl and Lt. Robert Neasham, who had concluded the objects in two 8mm UFO films submitted to the Air Force and examined by the CIA Panel were extraterrestrial spacecraft. Both men were reportedly emotionally shattered by the Panel's rejection of their studied conclusions.


But within a matter of days Lundahl and Neasham were invited by the CIA to resign their Navy officers' commissions and come over to the CIA as civilians and establish the CIA's National Photographic Interpretation Center (NPIC) at 5th & K Streets in Washington,DC, with Lundahl serving as the founding Director for the next twenty years and Neasham as his top assistant. In 1954 Lundahl was informed the CIA would begin flying high altitude reconnaissance missions over the Soviet Untion and Soviet Bloc [and China] the following year. Lundahl therefore went out an acquired the world's best computer, a large Swiss-built machine, and set out developing computer-enhanced photo analysis in order to extract intelligence from photos taken from 100,000 feet up.

The mastermind of what was to become the U.S. government's UFO policy and author of the CIA's Robertson Panel Report, which found that UFOs did not pose "a direct, hostile threat to National Security," was Fred Durant, an officer with the CIA's Office of Scientific Intelligence (OSI) who at the time was operating under the cover of being a civilian scientist employed by the Arthur Little Co. In fact, in August 1952 Durant, claiming to represent a small group of "concerned scientists" [actually CIA officers] had approached USAF Captain Ed Ruppelt, Commanding
Officer (CO) of the Air Force's UFO 'study,' Project Blue Book, and USAF Maj, Dewey Fournet, the Pentagon's liaison to Blue Book.

Most revealingly, the CIA had found it necessary to spy on the Air Force in order to find out what it had collected on UFOs, and Fred Durant had been the perfect man for the secret mission. Similarly, a few years later after the Soviets beat America to the punch with the launch of Sputnik, the first artificial satellite to orbit the Earth, the CIA's Fred Durant brought America's top rocket scientists together with our top satellite developers and began the American space program.

After the Robertson Panel meetings in early 1953, in which it became known that Durant had spied on the Air Force for the CIA in order to learn the USAF's UFO secrets, the men who'd cooperated with Durant [and thus the CIA], Ed Ruppelt and Dewey Fournet, were forced out of the service as punishment by the USAF's high-ranking Pentagon brass, and the dispute over control of UFO intelligence....

He may have gotten credit for discovering the missiles in Cuba, but it was my father, Gordon Heath who actually discovered them.

Will you email me and give me more info on your father Gordon Heath? Billkelly3@gmail.com

so my grandpa was ransom eng.

please email me at maryeng1@gmail.com

i guess i must state that i believe the middle gent looks extremely like grandpa except with a pinched blurred smile, almost as if the pic were doctored.

or his a big mancrush on jfk.

cuban missile crisis dates were cut out of his calendar.

it would make since if this CIA ufo lad were hanging with grandpa.

it was a big freak out to see grandpa next to jfk, but then again, lyndon johnson was a dinner guest, so it was really no big deal, as Eng privately advised johnson