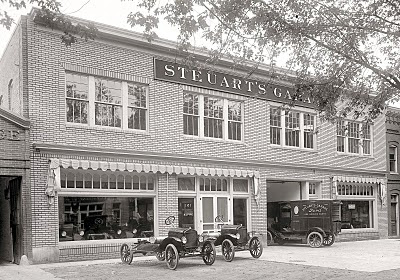 Later home to the NPIC

Washington, D.C., was the headquarters of most U.S. Navy photographic activities during World War II. Continuing a distinguished history of naval photography, hundreds of cameramen, including Edward Steichen and his team of professional photographers, fanned out from Washington to document both the European and Pacific theaters. They shot millions of still and motion pictures, and sent them back to various facilities, especially the Naval Photographic Science Laboratory at Anacostia. There, hundreds of men and women worked around the clock to generate images that would inspire both their military commanders and the American people with the prowess of the U.S. Navy in warfare.

Arthur C. Lundahl was the head of the Navy photo laboratory that originally analyzed the Utah Pictures (Newhouse film), supervised the analysis work. When the CIA formed their National Photographic Interpretation Center (NPIC), Lundahl became head of it and remained in that position until retirement. NPIC are the ones who detected the Russian missiles in Cuba. I've never seen a full biography on him, but recall that his photoanalysis experience went back to World War II, and he told us some stories about that. - Richard Hall

The first day, the panel viewed two amateur motion pictures of UFOs: the Mariana UFO Incident footage and 1952 Utah UFO Film (the latter was taken by Navy Chief Petty Officer Delbert C. Newhouse, who had extensive experience with aerial photography). Two Navy photograph and film analysts (Lieutenants R.S. Neasham and Harry Woo) then reported their conclusions: based on more than 1,000 man hours of detailed analysis, the two films depicted objects that were not any known aircraft, creature or weather phenomena.

(Note: Brad Sparks was the only researcher ever to interview Woo, who died in 1976. Woo had joined the CIA, in its highly secret Technical Services Division of the Clandestine Service working on spy cameras, several months after the Robertson Panel. Woo was still angry decades later at how the Panel scientists mistreated him and he praised Hynek for "sticking up" for him.)

A formerly SECRET report released under the Freedom of Information Act (FOIA) shows that CIA officials and consultants thought people seeing and reporting UFOs was more dangerous than UFOs themselves, stating, "the continued emphasis on the reporting of these phenomena [UFOs] does, in these perilous times, result in a threat to the orderly functioning of the protective organs of the body politic.

" Another 'danger' cited by the CIA panel was that acknowledging UFOs could results in "...the cultivation of a morbid national psychology in which hostile propaganda could induce hysterical behavior and a harmful distrust of duly constituted authority."

To counter these supposed dangers, the CIA panel recommended a policy of "debunking" and education designed to persuade people that what they were seeing really wasn't there.

In explaining how this psychological warfare against the American people should be carried out, the report stated:

"The debunking aim would result in reduction of public interest in 'flying saucers' which today evokes a strong psychological reaction. This education could be accomplished by mass media such as television, motion pictures and popular articles"

The panel had further ideas on how what was essentially a disinformation program should be mounted, stating: "It was felt strongly that psychologists familiar with mass psychology should advise on the nature and extent of the program." The report went on to name certain psychologists who might be recruited to join the debunking project.

The formation of the CIA panel came about as a sort of compromise worked out by the National Security Council (NSC) after events in the summer of 1952. A major UFO flap had taken place across the country, highlighted by puzzling incidents in July 1952, when UFO intruders were simultaneously tracked on ground radar and observed by jet interceptor pilots over the nation's capital, Washington, DC. The public, the press, and even President Harry Truman demanded to know what was going on. As a result, the US Air Force held a major press conference on July 29, 1952, the largest press conference since WW II, at which it was suggested the UFOs were temperature inversions--layers of warm air trapped under cold air that, by some giant stretch of the Air Force's imagination, were tracked on radar and seen as maneuvering flying craft by pilots sent aloft on scramble alert.

In August 1952, as documents released as the result of the FOIA suit filed by the author confirm, the CIA began reviewing the Air Force's handling of UFOs. Ransom Eng, an official with the CIA's office of Scientific Intelligence, wrote a report in which he characterized the Air Force's efforts as "scientifically invalid."

Armed with these criticisms, the CIA wanted to take charge of UFO intelligence [the collection and analysis of UFO evidence], and proposed, through CIA Director Walter Bedell Smith, that UFOs were much too serious of a matter to be left in the hands of the USAF. The National Security Council, however, would only approve a compromise where by a CIA-appointed panel would review UFO reports provided by the Air Force to determine if UFOs were a "direct, hostile threat to national security."

The struggle for power and funding between the U.S. Air Force and the Central Intelligence Agency had been on-going since 1947, the year the CIA was officially created and the Air Force became a separate service branch [after being part of the Army previously]. It would continue for decades thereafter throughout the Cold War with the Soviet Union, and include highly exaggerated Air Force Intelligence claims of Soviet bomber and missile superiority and 'first-strike' civil defense preparations, even though in 1955 the CIA gained somewhat of an upper hand with the development and covert deployment of the U-2 high altitude spy plane--at least in the sense of getting the President's ear.

In January 1953 the CIA's Robertson Panel, mostly consulting scientists of the CIA's chosen to review the UFO evidence selected by the USAF, rejected the conclusions of the U.S. government's top photo analysts from the Naval Photographic Interpretation Center (NAVPIC), Anacostia, MD, Capt. Arthur Lundahl and Lt. Robert Neasham, who had concluded the objects in two 8mm UFO films submitted to the Air Force and examined by the CIA Panel were extraterrestrial spacecraft. Both men were reportedly emotionally shattered by the Panel's rejection of their studied conclusions.


But within a matter of days Lundahl and Neasham were invited by the CIA to resign their Navy officers' commissions and come over to the CIA as civilians and establish the CIA's National Photographic Interpretation Center (NPIC) at 5th & K Streets in Washington,DC, with Lundahl serving as the founding Director for the next twenty years and Neasham as his top assistant. In 1954 Lundahl was informed the CIA would begin flying high altitude reconnaissance missions over the Soviet Untion and Soviet Bloc [and China] the following year. Lundahl therefore went out an acquired the world's best computer, a large Swiss-built machine, and set out developing computer-enhanced photo analysis in order to extract intelligence from photos taken from 100,000 feet up.

The mastermind of what was to become the U.S. government's UFO policy and author of the CIA's Robertson Panel Report, which found that UFOs did not pose "a direct, hostile threat to National Security," was Fred Durant, an officer with the CIA's Office of Scientific Intelligence (OSI) who at the time was operating under the cover of being a civilian scientist employed by the Arthur Little Co....