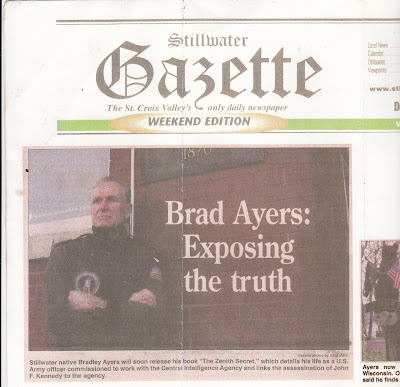 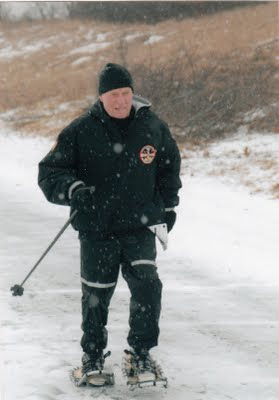 STILLWATER – Inside his small Western Wisconsin cabin, Bradely Ayers furiously pounds the keys on a typewriter for four hours each day.

Forsaking the new technology of a computer or even a word processor, Ayers, 71, knows this is the only way “they” can’t touch his work.

Vox Pop Publishing is set to release the Stillwater native’s latest book “The Zenith Secret,” which details Ayers’ history with the Central Intelligence Agency and his links between the federal outfit and the Kennedy assassination.

Set to hit bookstores later this year, the book also describes Ayers’ life as a U.S. Army officer commissioned to work with the CIA during the 1960s, where Ayers was a trained killer, working in covert operations to overthrow Fidel Castro and Communist Cuba.

Ayers said that after years of harassment from the CIA – members of the agency ransacked his previous home, spread false assault charges about Ayers and censored a previous book, among other tactics – he is eager to finally release the book after several delays.

While working with the CIA in the ‘60s, Ayers trained at the CIA’s clandestine JM/WAVE base in Miami.

To the outside world, the extensive base was known only as Zenith Technological Enterprises.

He was privy to top-secret information and witness to acts few ever repeated.

“I feel compelled as my life’s mission to document what I know by personal observation and experience,” said Ayers, who now lives in Frederic, Wis. “It’s that sense of purpose that so many folks and family don’t understand.

“I am dedicated to fulfilling a mission,” Ayers continued. “I became aware of activities and personalities when I was with the CIA that caused me great concern.”

But after constant harassment, why would anyone take the risks associated with retelling such a story? For Ayers, it’s simple.

“For me, the media and the media exposure is a form of life insurance,” Ayers said. “And I’m nearing 72, it’s worked.”

A Start at the Gazette.

In the 1950s, Ayers worked as a junior reporter for the Gazette, where he covered the Stillwater Prison riots and was the first reporter to gain access inside the prison walls after the inmates rioted.

After graduating from Stillwater Area High School in 1953, Ayers sought full time employment at the Gazette and at the Associated Press, but businesses were reluctant to hire a 18-year old with a draft requirement hanging over his head, Ayers said.

In the 1960s, he served in the U.S. Army before working for the CIA. When President John F. Kennedy and his brother were assassinated, Ayers recalled his experiences with the CIA and became more and more sure of the agency’s involvement.

The killings involved one major aspect of assassination, Ayers said – bring the subject into a “killing zone,” a place where multiple shooters can easily pick off the victim.

Anyone who questions his credentials, Ayers said, should only refer to his past as a covert operative training to assassinate Fidel Castro.

Ayers decided to start his own investigation into the assassinations – he’s a licensed private investigator in Arizona and Florida – and found evidence linking principal parties from the CIA to the killing.

Ayers suggested that the CIA made Lee Harvey Oswald “a patsy,” taking the fall for a much larger conspiracy. But Ayers said he doesn’t fall into the Oliver Stone conspiracy theory subculture. That group is fraught with a variety of “low-lifers, ex-cons, and rip-off artists,” he said.

“I mistrust that whole subculture and I’ve tried to distance myself from it,” Ayers said. “They’re the most destructive force and they have brought ridicule on attempts to solve the domestic assassinations.”

“The information in this book is not based on wishful thinking, preconceptions, or ulterior motives,” he continued. “I brought the same kind of due diligence and intellectual integrity that I’ve ever brought to any of my investigative work.”

Living as a civilian

He quiet the CIA after watching one of his colleagues, who Ayers named “Karl,” plummet to his death from a helicopter.

During the flight, a fellow officer, brandished a pistol and moved towards Karl. Before the man could shoot, Karl rolled himself into a ball and plunged from an open helicopter door. After watching the gruesome display,Ayers decided to leave the agency and try his hand at civilian life.

Ayers said he felt similar to Robert Redford’s character in the 1975’s “Three Days of the Condor” – over the years he kept his alliances close and rare. Ostracized by his own family, some have half-jokingly compared Ayers’ scant lifestyle to that of the “Unabomer,” Ted Kaczynski.

“I’m estranged from my immediate family, they basically consider me a “Don Quixote,” Ayers said.

His life in cover operations, and the fallout in uncovering that life still separates the Stillwater native from his family. The former Army Ranger lives in a 500-square foot cabin on the shore of a relatively small 120-acre Somers Lake in Frederic. He’s the only full-time residence among his neighbors, who he sees only on summer weekends. His unlisted phone number changes often and the fax machine is his preferred mode of communications.

“I’m aware that the government or other dark forces have the technical ability to externally gain access to hard drives and electronic memory devices,” said Ayers, who stays off the Internet.

His seven cats and six dogs keep him company during the serene nights at the cabin. A large Army Ranger logo affixed to a woodcarving greets the few who amble onto his property. Ayers said he’s tried to live the life of a Boy Scout – any black mark to his name could completely compromise his life’s work.

But he isn’t hiding out in the woods. He walks his dogs, exercises daily and competes in various runs and snowshoe races every year. He’s competed in the Lumberjack Days 5K run 30 times and hangs several medals in his modest bedroom, which doubles as an office. The medals aren’t for show, he said, they simply provide Ayers with a visualization of his success.

“The fact of the matter is, if you look at what you did last year, and visualize it, you can do it again,” Ayers said.

The competition is a release for Ayers – he leaves the anger, frustration and anxiety of his past at the starting line.

Above all, Ayers finds his writing a release from the nightmares and aggravation that often bring him from sleep or take away from peering out into the calm waters of Somers Lake. In writing, the 71-year old said he escapes to days gone by, spent at the corner of Second Street South and East Myrtle.

“I always saw my future as a newspaper reporter,” Ayers said. “That’s why I always come back to the Gazette.”

Bradley Ear Ayers was born on March 7, 1935, in St. Paul, Minnesota, of second generation English/Scandinavian – French-Canadian/Cree Indian descent. He is the oldest of four boys. He attended a parochial grade school in St. Paul. His family moved to Stillwater, Minnesota in 1948 where he completed his primary schooling. During high school he was active in sports and as a junior reporter for the community daily newspaper. He graduated in 1953, shortly before the end of the Korean War.

Immediately following high school, at the age of eighteen, he enlisted in the U.S. Army paratroopers. This began a twelve year period of active duty military service during which he was promoted through the infantry ranks from private to captain. He served in command and staff assignments, from rifle company to Department of Defense level, at various stations in the United States and overseas. His military specialties were: unconventional and paramilitary warfare, ranger-command, anti-terrorist and covert operations. He is qualified as a master parachutist, underwater demolition swimmer, mountaineer, air craft pilot and flight instructor. He received various awards and decorations for his military service.

In early 1963 Ayers was selected by the Department of Defense for a sensitive undercover assignment with the U.S. Central Intelligence Agency. Upon completion of this top secret mission he resigned his Regular Army commission. He was one of the first career officers to voice opposition to the Vietnam War and to speak out publicly against the influence of private and special interests in American foreign and domestic policy. He was honorably discharged from active duty in 1965 and was recommissioned in the United States Army Reserve. He continued to serve in paramilitary and intelligence fields as a government contract agent.

His comprehensive background in military and intelligence service led to the publication of his non-fiction book The War that Never Was – an insider’s account of CIA covert operations against Cuba, released by Bobbs-Merrill Co., Inc. in 1976. An expanded paperback version of the book was published in 1980.

The War that Never Was was rewritten and reissued as an expanded, updated and uncensored format as The Zenith Secret.

Ayers is a graduate of the Minnesota Metropolitan University and holds a masters degree in education. He is conversant in Spanish and German. He remained active in the U.S. Army Reserves until early 1981. He maintained FAA certification as a commercial pilot and flight instructor until 1991.. Since then he has served on special assignments with the U.S. Justice and Treasury Departments.
Posted by William Kelly at 8:49 AM

Thanks for posting that article, Bill. Good one.