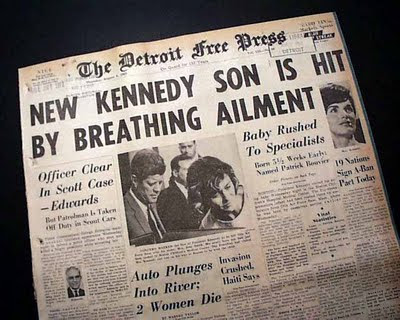 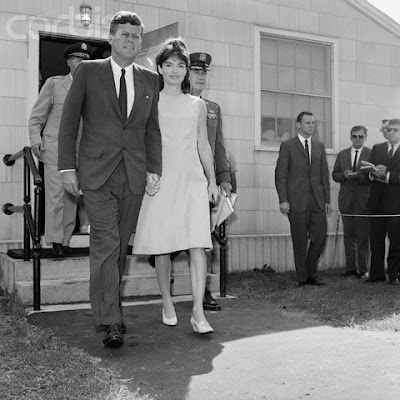 Walsh was in the motorcade with JFK's personal physician and also had a private office in Bethesda, where Dr. Rivera also had an office at NIH.

Here's an article that describes the premature birth in detail, and how JFK had to fly to Otis AFB in a small jet that had no communications equipment, and describes the Kennedy suite at the AFB as elaborate.

The Presidency: The Struggle of The Baby Boy - TIME

Since neither of the two presidential Boeing 707 jets was available for the rush trip to Cape Cod,Kennedy took a twinjet, eight-passenger Lockheed Jet-star — an airplane never before used by a President because it lacks the intricate communications facilities that go with the Chief Executive whenever he is in the air. While President Kennedy was still on the way, a ten-member military medical team assisted Dr. Walsh with the caesarean delivery. And at 12:52 p.m., a baby boy (4 Ibs. 10 oz., and 17 in. long) was born to Jackie Kennedy.

If the baby had not been premature, it would have been born at Washington's Walter Reed Hospital. But, just in case, the Air Force had long since readied a ten-room suite (nursery, kitchen, two lounges and six bedrooms) at Otis. By the time Jackie arrived, 200 special guards had been posted around the 22,000-acre base.

It appears however, that JFK was really pissed off at a WP report a month before that said the Air Force spent $5,000 for furniture for the suite, which instigated JFK to call an AF General (Not LeMay) and really lay into him - cursing - Silly Bastard - Obviously a Fuck Up....

July 24, 1963, the Washington Post reports that the US Air Force spent over $5,000 refurbishing a room at Otis Air Force Base for use as Mrs Kennedy's maternity suite."

July 25, 1963. President Kennedy phones an Air Force General in DC to express his displeasure with the Post's story.

JFK:...that Air Force has caused itself more grief with that silly bastard…Did you see the Post this morning?

General:Yes sir, I'm looking at it.

JFK: Did you see that fella's picture by the bed. And did you see that furniture they bought from Jordan Marsh? What the hell did they allow reporters in there for? Are they crazy up there? Now you know what's going to do…any Congressmanis going to get up and they'll say, "If they can throw away $5,000 on this, lets cut them another billion dollars. You just sank the Air Force budget. They're crazy up there. Are they crazy? That silly bastard with his picture next to the bed. I want to find out who paid for that furniture and I want itto go back to Jordan Marsh. Then I want that fellow's incompetent who had his picture taken next to Mrs. Kennedy's bed, if that's what it is. He's just a silly bastard. I wouldn't have him running a Cat House. I hope they're not all incompitant. Is that the way they are throwing money around over there. You better look into it, especially after you told me it wouldn't cost a cent.

JFK: Well this is obviously a fuckup.


John Judge notes: Otis is a longtime Strategic Air Command base under NEADS and one of two that survived all cuts after the Cold War ended. LeMay would have been in charge at some level at Otis as Secretary of the Air Force and as SAC designer. Otis planes went up late on 9/11. Premature birth can be induced with certain chemicals, how else could Riviera have foreknowledge? Unless Jackie had some history of aborted or premature births? JJ (She did)

Thanks to Mike Hogan for calling attention to this article that identifies the General JFK is talking to as his Air Force aide Godfrey McHugh.

“Imagine what they’d do if you didn’t stay on their ass!” -- JFK on Wasteful Air Force Spending

One of the great pleasures of my work is being able to find and read or listen to documents and recordings from the presidencies and congresses of the early Cold War era. Harry Truman, Lyndon Johnson, Richard Nixon? They’re all still very much alive in my brain. So, too, is John F. Kennedy, most recently because of a story by R. Jeffrey Smith in the Washington Post (“Terrorism Funds May Let Brass Fly in Style,” July 18, 2008, page 1) on counterterrorism funds being spent by the Air Force on fancy furnishings for aircraft used for travel by high-ranking officers.

I'm as opposed to and appalled by arrogant, wasteful spending by government bureaucracies as anyone. But the Post story reminded me of two hilarious taped conversations1 from the Kennedy White House showing that, as Harry S. Truman often said, “The only thing new under the sun is the history you don’t already know.”

On July 25, 1963, the newspaper featured a story about how Air Force officials had spent $5000 on top-of-the-line bedroom furniture (from the Jordan Marsh Company) for a northeastern air base's hospital, in case the famously pregnant Mrs. John F. Kennedy would decide to have her baby there, should she be in Massachusetts when “the time” came. (Indeed, Patrick Bouvier Kennedy would be born, following premature labor and emergency caesarian section surgery, on August 7 of that year at Otis Air Force Base, the Massachusetts facility in question on the JFK tapes. The baby would die two days later in Boston Children’s Hospital.)

Fortunately, for those who love political history, the tape recorder was rolling when JFK telephoned two people just after seeing a photo in the morning's Post of an Air Force officer with the furniture. An absolutely furious JFK told Arthur Sylvester, the press spokesman for Secretary of Defense Robert McNamara: "I'd just like to send that goddamn furniture back…to Jordan Marsh in an Air Force truck this afternoon with that captain [who made the furniture purchase] on it…."

Further, JFK said, "What about transferring his ass out of here in about a month?…for incompetence, not for screwing us. And that silly fellow who had his picture taken next to the bed, I'd have him go up to Alaska, too." (Click here to listen.)

Kennedy felt great pressure from liberals in his party in Congress and elsewhere who thought military spending was too high. Meanwhile, most military leaders and conservatives on Capitol Hill thought the President (and his defense budget) were inadequate to meet the Soviet threat.

To his Air Force aide, General Godfrey McHugh, the President exploded: "Did you see the Post this morning?....You just sank the Air Force budget!" Kennedy predicted, “Any congressman’s gonna get up and say, ‘Christ, if they can throw $5000 away on this, let’s cut ‘em another billion dollars.’ ”

About the "silly bastard" featured in the Post photograph standing next to "Mrs. Kennedy's bed, if that's what it is…I wouldn't have him running a cat house!" 2

1 I obtained the records at the Miller Center website . The two conversations are numbered jfk_dict_23d1 and jfk_dict_23d2. Note: The first 40 seconds of the first recording are mostly silent. Also, you and your computer may not find playing these audio files a user-friendly experience. Don’t email me for technical advice!

2 JFK obviously had an edition of the Post with the photograph, though the copy of the story I found did not have that photo.
Posted by William Kelly at 12:38 AM

In like vein, I'd like to hear the conversation between general petraeus
and president Obama...I'm sure it was much the same...