WAS GENERAL AT ON ?

Where was General Curtis LeMay at the time president Kennedy was assassinated? 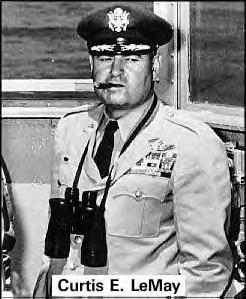 Was he on vacation hunting and fishing in upstate , as his official biographies attest, or was he at or at a secret command & control bunker overseeing the operation?

An official biography of Air Force General Curtis LeMay reports that at the time President Kennedy was assassinated he was on vacation, hunting and fishing with family members in upstate .

"Iron Eagle: The Turbulent Life of General Curtis LeMay," by Thomas M. Coffey (p.430) reports that 's wife was from and he had apparently told his biographer he was in on vacation and "hurried back to in time for the funeral."

But an Andrews Air Force base log book, that was salvaged from the trash and almost destroyed, indicates that ordered a special Air Force jet to pick him up in shortly after news of the assassination was widely broadcast, which indicated to some that he wasn’t hunting and fishing in .

Exploring the possibility that Gen. LeMay attended JFK’s autopsy at , as Navy medical corpsman Paul O’Conner attests, Doug Horne, the Chief Analyst for Military Records for the Assassination Records Review Board, made note of ’s presence in rather than , as his official biography reports.

And Larry Hancock, author of “Someone Would Have Talked” and “Nexus,” also thought it significant and notes: "I was struck by the fact that it (’s bio) made a big deal of his being so remote that he was out of contact and was not even able to make it back to until the funeral. I don't see that as a minor thing, the book definitely creates the impression that he was not back in that weekend. This really is an important point, if Doug is right and can be verified it looks pretty certain that was handing out disinformation and there would need to be a good reason for that. After all, it would not be unusual for him to rush back to DC or to some other AF base where he could achieve command and control capability. What seems to me not at all understandable is why he would go to , and then lie about it."

The official internet web site for Wiarton includes a photo of the Air Force base, but also makes tantalizing references to , the secret training camp for spies used by the British and Americans during World War II, and used as a hideaway for a prominent Soviet defector during the Cold War.

“Camp X was the unofficial name of a Second World War paramilitary and commando training installation, on the northwestern shore of Lake Ontario between Whitby and Oshawa in Ontario, Canada. The area is known today as , after the code name for Sir William Stephenson of the British Security Coordination.”

“ was established by the chief of British Security Coordination (), Sir William Stephenson, a Canadian from , and a close confidante of Winston Churchill and Franklin Delano Roosevelt. The camp was originally designed to link and the at a time when the was forbidden by the Neutrality Act to be directly involved in World War II. Before the attack on and 's entry into the war, opened for the purpose of training Allied agents from the Special Operations Executive, Federal Bureau of Investigation, and American Office of Strategic Services (OSS) intended to be dropped behind enemy lines as saboteurs and spies. However, even before the entered the war on , agents from 's intelligence services expressed an interest in sending personnel for training at the soon to be opened Camp X. Agents head of the , who credited Sir William Stephenson with teaching Americans about foreign intelligence gathering. The even named their recruit training facility "The Farm", a nod to the original farm that existed at the Camp X site.”

“One of the unique features of was Hydra, a highly sophisticated telecommunications centre… Hydra also had direct access via land lines to  and  for telegraph and telephone communications… In the fall of 1945 was used by the RCMP as a secure location for interviewing Soviet embassy cypher-clerk Igor Gouzenko who defected to on September 5 and revealed an extensive Soviet espionage operation in the country. Post-war, the camp was renamed the Oshawa Wireless Station and was turned over to the Royal Canadian Corps of Signals as a wireless intercept station, in essence a spy listening station. The Oshawa Wireless Station ceased operations in 1969.”

While the site was still in use as a top-secret and secure military communications base in 1963, it is located South East of Toronto, while Wiarton is located northwest of , so they are not near each other.

And although both Toronto and Wiarton are in Canada, they are actually south east of the rural lake area of North Michigan where LeMay was said to have been at the time of the assassination, and it is possible that LeMay flew by private airplane across Lake Huron that separates Michigan and Canada, to Wiarton, which is closer to Michigan than Toronto.

According to the Andrews Log, within an hour of the assassination LeMay requested a P/U Pick Up at Toronto, and twenty minutes later a C-140 – an Air Force version of a small, executive jet, was sent to pick him up, but while it was still in the air, it was diverted to Wiarton, a small military base north west of Toronto. 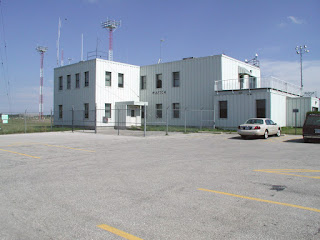 Canadian researcher, Randy Owen got in touch with an author who was working on a history of Wiarton, who seemed to be genuinely surprised about the story and  was asked if he could check it out. Owen said he never heard back and, “I'd be surprised if there was someone alive today who remembered the incident, if it happened. And I'm not sure there may be a paper trail, either. My understanding is an organization called Nav could have any records if they still exist. But an inquiry on my part produced a rather arogant response from Nav saying they have no reason to provide the information I was seeking to any member of the public, even if they had it.”

John Judge, while perusing a batch of then recently released JFK assassination records as Archives II, came across some NSA documents on the military alert status in the aftermath of the assassination. Included among them was a newspaper article on false reports that General LeMay had been killed in an airplane accident that day.

From Wiarton, LeMay had been ordered by Air Force Secretary Zuckert to proceed to Andrews Air Force base where they both were to greet Air Force One and meet the new President, but instead LeMay landed at Washington National, which is closer to downtown DC, the Pentagon and the Bethesda Naval Hospital, where some contend LeMay was during the autopsy of the President a few hours later.

While enroute between Wiarton and Washington, ’s deputy, Colonel George Dorman tried to communicate with him via sideband radio using the Andrews Air Force base operations center, who were relaying radio patches between Air Force One and the White House and other locations. Dorman told the Andrews radio operator that he had an important message for , whose plane was due to arrive in within a half hour. Because the message itself was not recorded on the Air Force One radio tapes, there is much speculation as to what the message actually was.

Although Colonel Dorman was killed in a few years later, his wife Mary Dorman, who was working at the White House at the time of the assassination, recalls the events of those days, but she didn’t know what the message was her husband wanted to convey to .

Her son George Dorman, Jr. a witness to the burial of the President at Arlington cemetery, also recalls the events of that weekend, and suggests a number of possibilities, including what Secretary Zuckart wanted LeMay to know, the alert status of SAC or where LeMay wanted to go once he arrived in DC, the Pentagon, Andrews or Bethesda.

Dorman said it was peculiar that his father was not with in or , or where ever he was, since he was almost always at ’s side, which supports the contention that really was on vacation, fishing and hunting at his in-laws lake resort.

Dorman also thought it odd that didn’t have his own plane with him, “Speckled Trout,” a special command and control plane that he often used, and a sister plane to “Silver Dollar,” NEACP – the flying “Doomsday” plane.

So the answer to the question of whether Gen. LeMay was at at the time of the assassination is probably no, we still have more questions that answers.

Although there should be a more thorough record among the archives of government that documents the whereabouts of General LeMay, it is so far clear that we don’t really know where he was at the time of the assassination nor where he went after he arrived in Washington, both facts that can and should be established with more certainty.

NOTE: With the recent addition of the fact that there were two SAC bases in North Michigan in 1963, it appears that LeMay could have used either of these basis for a PU/Pick Up rather than traveling to Toronto or Wiarton, Canada. - BK
Posted by William Kelly at 4:21 PM

There were 2 SAC bases in Northern Michigan's Upper Pennisula in 1963.

Growing up in that area, I remember visiting K.I. Sawyer with
a friend whose father was an AF Officer, and seeing rows of
B-52s lined up and ready for take off.

With reference to Sir William Stephenson of BSC, Bill, have you read Jennet Conant's book, The Irregulars: Roald Dahl and the British Spy Ring in Wartime Washington? In it Conant documents that the BSC's "Stephenson allowed [Ian] Fleming privileges far above his rank. He invited him to his penthouse, which for all practical purposes was a safe house, where he held court in an elegant two-storied drawing room with an enormous fireplace and regularly gathered the grand and near-grand of the British High Command. Among those who could be found there, at various times, were General Lord Ismay, the prime minister's defense chief of staff; Major General Sir Colin Gubbins, chief of the Special Operations Executive; Lord Beaverbrook; and many others. It was there that he introduced Fleming to the handful of figures in his inner circle, including Ernest Cuneo, Donovan's personal liaison between British intelligence, the White House, and the FBI." This close relationship between British and American spies which began at Camp X during WWII continued unabated 20 years later when the upstart JFK promised to bust it up.

That 8 days in May fishing scene came to mind. JFK assisted in the making of that movie.