The Swearing In Aboard AF1 - A New Perspective 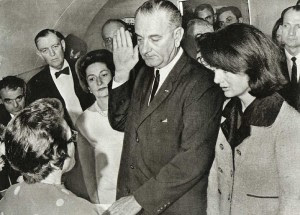 The Swearing In aboard AF1 - A New Perspective

Public Relations Ploy or Holding off a Military Coup?

"Officials at the Pentagon were calling the White House switchboard at the Dallas-Sheraton Hotel asking who was now in command. An Officer grabbed the phone and assured the Pentagon that Secretary of Defense Robert MacNamara and the Joint Chief of Staff ' are now the President.”
– Jim Bishop – “The Day the President Was Shot”

From all accounts the first decision LBJ made as president was to go immediately to Air Force One, because of its security and advanced communications equipment, and the second decision was to hold the swearing in ceremony immediately before they took off.

The first decision was made at before the official announcement was made that JFK was dead, while the second decision was made aboard Air Force One after LBJ made a series of telephone calls, one to Attorney General Robert F. Kennedy to obtain the wording of the oath of office.

Other calls were made from Air Force One as well, by LBJ himself, such as the call to his personal tax attorney J. Waddy Bullion, during which they discussed his Haliburton stock. LBJ’s close aides, such as Bill Moyers and Cliff Carter also made telephone calls.

The secure telephone lines set up for Air Force One at Love Field were special trunk lines that had to be detached from the plane before take off, after which all the communications were made through radio patches over three or four sideband radios in the communications room behind the cockpit.

All of the president’s communications were controlled by the White House Communications Agency (WHCA), then led by Col. George McNally (code name “Star”), who was having lunch at the airport terminal when the assassination occurred and returned to Air Force One to ensure that the new president could communicate with anyone in the world.

The trunk line at Love Field aboard Air Force One was only one of a dozen such secure land lines that were connected by the WHCA – others being at locations where ever the President was or would be – the hotel in Fort Worth where JFK spent his last night, at the Dallas Trade Mart where he was scheduled to give a luncheon speech, and other locations in Texas where he was scheduled to be.

The and base station for the portion of the trip was set up in a room or suite of rooms at the Dallas Sheraton Hotel,

According to William Manchester, it was McNally’s duty to ensure that the president was always within five minutes of a secure telephone. “Colonel McNally had a corps of advance men. By dawn of that Thursday morning temporary switchboards had been installed in trailers and hotel rooms in , , , Dallas, and at the LBJ Ranch. Each had its own unlisted phone number. The Dallas White House, for example, was in the Sheraton-Dallas Hotel. It could be reached through 1-3421, 1-3422, and RIverside 1-3423, though anyone who dialed one of them and lacked a code name of his own would find the conversation awkward.”

Jim Bishop's book “The Day Kennedy Was Shot” contains a revealing incident:
"Officials at the Pentagon were calling the White House switchboard at the Dallas-Sheraton Hotel asking who was now in command. An Officer grabbed the phone and assured the Pentagon that Secretary of Defense Robert MacNamara and the Joint Chief of Staff are now the President."

While there is no documented or officially archived evidence that LBJ, as the new president, communicated directly with the Pentagon or any of his generals, except those who were aboard Air Force One, it is possible that LBJ learned of the report(s) that “the Secretary of Defense Robert MacNamara and the Joint Chiefs of Staff are now the President.”

If that is the case, the decision to hold the swearing in ceremony immediately may have been a reaction to these reports that the Joint Chiefs “were now the President,” rather than merely a public relations ploy to sooth the doubts of a nation as to continuity of government and the proper line of succession.

“Of all the things Kennedy did for Johnson, none, however, was perhaps more instantly important on the weekend of Nov. 22 than a minor decision Kennedy made months before. He had decided that, in the secret and emergency planning for continuity of American government in the happenstance of a nuclear attack, Johnson should be given a major role. Through Major General Chester V. Clifton, who acted as White House liaison with the Department of Defense, all emergency operational planning was made available to the Vice President in duplicate. These plans, envisioning all things – from the destruction of all major cities to the bodily transfer of governing officers to an underground capital – included, of course, detailed forethought of the event of the sudden death of a President.”

“Because he had participated in all these plans, both panic and ignorance were already preauthorized in the vice President; on the night of Nov. 22, 1963, he knew exactly all the intricate resources of command and communications at his disposal. Beneath this lay the experience of a man who had spent 30 years observing the work of the federal government, while beneath that lay the instincts of a country boy. Now it was him to act.”

So the first two decisions LBJ made – to go immediately to Air Force One because of its superior communications equipment and take the oath of office before taking off, were both moves that were engrained into the special continuity of government plans that JFK had made LBJ privy to.

That LBJ took the oath of office, not to convince the American public who was president, but to head off a full blown military coup, is supported by LBJ’s opinions of the Joint Chiefs, as he himself expressed to them in a meeting in the Oval Office a year later, and as recounted by Lt. Gen. Charles Cooper, USMC (Ret), in "Cheers and Tears: A Marine's Story of Combat in Peace and War" (2002.  “….Seemingly deep in thought, President Johnson turned his back on them for a minute or so, then suddenly discarding the calm, patient demeanor he had maintained throughout the meeting, whirled to face them and exploded. I almost dropped the map. He screamed obscenities, he cursed them personally, he ridiculed them for coming to his office with their ‘military advice.’ Noting that it was he who was carrying the weight of the free world on his shoulders, he called them filthy names - shitheads, dumb shits, pompous assholes - and used ‘the F-word’ as an adjective more freely than a Marine in boot camp would use it. He then accused them of trying to pass the buck for World War to him. It was unnerving, degrading. After the tantrum, he resumed the calm, relaxed manner he had displayed earlier and again folded his arms. It was as though he had punished them, cowed them, and would now control them. Using soft-spoken profanities, he said something to the effect that they all knew now that he did not care about their military advice. After disparaging their abilities, he added that he did expect their help…”  [For the complete article on this meeting see: http://jfkcountercoup2.blogspot.com/2012/07/lbj-joint-chiefs-day-it-became-longest.html ]

If LBJ held the same feelings for the military at the time of the assassination, the early reports immediately after the assassination that MacNamara and the Joint Chiefs “were now the President,” which came from the WHCA base station at the Dallas Sheraton, could have stimulated LBJ to hold the swearing in ceremony immediately aboard Air Force One so that the whole nation and the world, as well as the brass at the Pentagon, knew who was President.

Posted by William Kelly at 6:33 PM

They were not talking about the presidential succession but the NCA: An essential element in Eisenhower’s military planning was the National Command Authority (NCA) nuclear... release authority that would have decisive control over the use of nuclear weapons if the President were disabled or killed. According to Thomas B. Allen, of War Games, the nuclear... release authority passes from a ...disabled or missing President to the Secretary of Defense, and then, if necessary, to the Deputy Secretary of Defense.

Good Article Bill,
Wasn't the Dallas Sheraton where the Bushes were staying the night before? If I had thought LBJ was not involved I might have called the White House about the Plot I witnessed with Bush and Hoover in Houston late that afternoon.

BUSH stated that he wanted to be kept confidential but wanted to furnish hearsay that he recalled hearing in recent weeks, the day and source unknown. He stated that one JAMES PARROTT has been talking of killing the president when he comes to Houston.

BUSH stated that PARROTT is possibly a student at the University of Houston and is active in political matters in this area. He stated that he felt MRS FAWLEY, telephone number SU 2-5239, or ARLENE SMITH, telephone number JA 9-9194 of the Harris County Republican Headquarters would be able to furnish additional information regarding the identity of PARROTT.

BUSH stated that he was proceeding to Dallas, Texas, would remain in the Sheraton-Dallas Hotel and return to his residence on 11-23-63. His office telephone Number is CA 2-0395.

The memo contained several intriguing details, but no news organization picked up on them. Indeed, no one paid any heed to the whereabouts of Poppy Bush at the time of the JFK assassination – except Barbara Bush. In 1994, three decades after Poppy began not remembering where he was on November 22, 1963, it was suddenly Barbara who remembered."
--------
And Barbara said they were up in Tyler Texas where George was giving a speech while she was at the Hair Dresser. I saw her late that afternoon with Hoover and George and many operatives on the extra Hollywood Hootenanny Chartered Bus when they got on at the Houston airport. I reported this to the FBI in 911 and again in 2018 with new evidence that Barbara had dyed her hair that day.. blond. And I have the only photo of a blond Barbara taken around Easter 64 with her 4 yr. old Daughter, Dorothy.