Other than the prosecution of  Leslie Charles Waffen, the former official for stealing and selling records, JFKcountercoup: Ex-NARA Offical Arrested for theft can you tell me if any legal action has ever been taken against any of those who have committed similar crimes - stealing JFK records, deliberately destroying JFK assassination records, or wrongfully withholding JFK assassination records?
Among those items I am aware of, the Andrews Air Force Log Book JFKcountercoup: The Andrews AFB Log Book 11/22/63 was reported salvaged from the trash. Was their an inquiry into who ordered such an historical record destroyed or trashed?

RFK’s appointment book for an entire year is missing. Was there an investigation into what became of it? 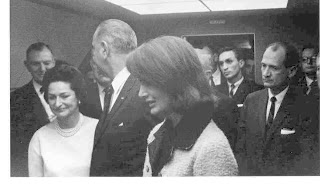 The negative of this photo is missing from the LBJ Library, which is administered by the NARA

JFK’s Catholic missile and the “wink” negative from LBJ’s swearing in and the unedited Air Force One radio transmissions all disappeared from the inventory of official records. The photo negative must have disappeared from a vault.

The Secret Service destroyed relevant records after the AARB decided to seek them. Who was responsible for that destruction and were they prosecuted for breaking the law? JFKcountercoup: Secret Service Records Previously Thought Destroyed Turned Over to NARA

Other pertinent records, such as the entire office files of Admiral Rufus Taylor, the Director of Naval Intelligence were declared missing and not included in the JFK Collection. JFKcountercoup: Rear Admiral Rufus Taylor ONI Records Missing? Has there been any investigation into the possible theft or illegal destruction of these historic public records? Isn’t the Navy and concerned that the missing office files of the director of ONI will fall into the hands of the Russians or a Wiki Leaks sympathizer? Has any attempt been made by to restore DNI Taylor’s assassination related records from the files of other agencies with whom these documents were shared? JFKcountercoup: Rufus Taylor & Dallas ONI SA J. Mason Lankford, Jr.

Agency directors had to sign a sworn statement under penalty of perjury that all of the relevant records were turned over to the JFK Collection. Since there have been such blatant violations in the destruction, theft and wrongful withholding of JFK records, have any of these crimes been investigated or anyone charged with perjury?

Many agencies intentionally stalled their response, knowing the ARRB was a temporary agency. If the is responsible for carrying on the work of the ARRB, shouldn’t those individuals who destroyed, lost/stole or wrongfully withheld records be held accountable for their crimes?

Thank you for your time and interest in these matters,
William E. Kelly, Jr.
http://jfkcountercoup.blogspot.com/
Browns
billkelly3@gmail.com

Posted by William Kelly at 7:25 PM