Joan Mellen’s “Our Man in Haiti” 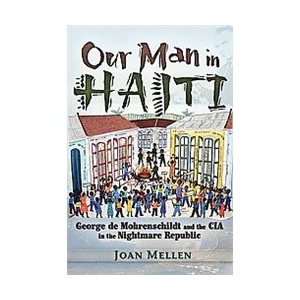 As we approach the 50th anniversary of the assassination of President John F. Kennedy we can expect a slew of books on the subject and Joan Mellen’s “Our Man in ” is one of the first out of the gate. .

This book is not about the assassination of President Kennedy, but it does add some interesting pieces to the puzzle of – the Haitian intrigues of the accused assassin’s “babysitter” George DeMohrenschildt, who many believe assisted in setting up Lee Harvey Oswald as the patsy to take the fall for the murder of the president.

Nor is this book about “our man” in Haiti in the sense that Win Scott was “our man in Mexico” or Gram Green’s comic spoof “Our Man in Havana,” as Mellen herself attests – “our man in Haiti” in this story could be DeMohrenschildt, Haitian banker Clem Charles or even the greaser I. Irving Davidson, all featured characters in what also turns out to be a somewhat sad but comic and frustrating spoof on everyone.

While most of the action takes place in from the time of the assassination up until the strange death of DeMohrenschildt in 1978, it does often refer to the crux of the matter - the earlier association in between the regal, distinguished and shifty DeMohrenschildt and the repatriated ex-Marine defector Lee Harvey Oswald.

When Oswald first arrived home from behind the Iron Curtain he was befriended by the charismatic baron George DeMohrenschildt, who recounts his relationship with Oswald in the unpublished manuscript “I’m a Patsy,”

As noted by Mellen, DeMohrenschildt sought out Oswald and in the company of Col. Lawrence Orlov, a equally mysterious character who subsequently seems to just disappear. DeMohrenschildt then became a mentor to Oswald and introduced him into a unique network of friends, who provided Oswald with places to stay, jobs, gifts and even took care of his family’s dental needs.

Then, shortly before DeMohrenschildt moved on to Haiti, he “passes” the responsibility for caring for the Oswalds off on to Ruth and Michael Paine, who assume the same “babysitter” and patron role as DeMohrenschildt previously played leading up to the assassination.

Since I am of the belief that Oswald didn’t shoot anyone on November 22, 1963, and was framed as a patsy as he himself claimed, he also plays the distracting role of the “rabbit,” who leads investigators astray while the real assassins slip by unnoticed.

If Oswald actually did shoot the President, DeMohrenschildt would have been a primary “person of interest” and suspected as a collaborator or facilitator in the crime, but as Mellen accurately describes him, DeMohrenschildt is one of those who helped frame the patsy for the crime of the century.

While the real assassin(s) would lead directly to the sponsors of the operation, Oswald and the detractors, including DeMohrenschildt, also lead to them, but in a more roundabout way, one with many detours and dead end alleys, which is one of the reasons why Oswald was designated as the principle patsy in the first place.

As his son-in-law told the Warren Commission, no one had more influence over Oswald than DeMohrenschildt, but putting a trace on the shifty and smooth operator is not an easy thing to do. Since he had so many secret and powerful associations, it’s difficult to know which intelligence agency was running him at any one time. George was associated with the Polish, German, Mexican and French intelligence services during World War II, and applied for a job with the , while his brother Dimitri was even more influential. Having served in , as did their father, Dimitri helped found the CIA’s Radio Free Europe and Radio Liberty, edited the Russian Review, was a professor at and worked at the Hover Institute at Stanford at the time of the assassination. .

Before George DeMohrenschildt met up with Oswald, and set him on the path to , he had worked for a number of major players - mainly , and oil men, and had three rich and influential wives, all of whom are colorful characters in Mellen’s book.

In 1957 DeMohrenschildt went to Yugoslavia on behalf of the US government International Cooperation Administration (ICA, aka CIA), but was asked to leave the country, accused of drawing secret military fortifications, just as he came to the attention of authorities in 1941 for photographing and drawing the Coast Guard facility at Corpus Christi, Texas.

Back home DeMorhrenschildt was interviewed by J. Walton Moore, the head of the Dallas Domestic Contacts Division of the CIA, which routinely debriefed American businessmen when they returned from abroad.

But DeMohrenschildt filed ten separate reports with , and later said that gave his okay and encouraged his association with Oswald, a point later denied by , although he too was a friend and handball partner with Col. Lawrence Orlov, who accompanied DeMohrenschildt when he first sought out Oswald. Although not mentioned by Mellen, was also a agent who served in with Charles Ford, the man who later took a leave from the CIA’s office of training to be RFK’s liaison with the mobsters involved in the JMWAVE plots against Castro.

Although Gaeton Fonzi and Dick Russell came close, Bill O'Reilly, when he was a young and hungry TV reporter in in the late 1970s, almost got the elusive interview with DeMohrenschildt’s CIA contact J. Walton Moore, but came away without a cigar. [See: David Talbot review of O'Reilly’s book “Killing Kennedy”: Bill O’Reilly wimps out - Salon.com ].

After taking care of the material needs of Oswald and his family for about a year, DeMohrenschildt introduced them to Ruth and Michael Paine, who then fulfilled the Oswald’s needs previously taken care of by DeMohrenschildt, while he took off for a new mission in Haiti.

What was George up to in while his squire Oswald was getting tangled up in the assassination of the president in ? It was pretty much the same game – as DeMohrenschildt was involved in an attempt to take over the presidency of in a coup that could have also included assassination. While Oswald is generally recognized as a pawn that was put into position to checkmate the president at , DeMohrenschildt was a more powerful and maneuverable rook or bishop in the same game, though an equally dispensable one.

According to Mellen George DeMohrenschildt was “a tall, comely man, who spoke with a pronounced accent that to some sounded German. There was nothing straightforward about him…He was a handsome man who used his sexuality as a weapon to dominate and degrade people…an easy man to discard when his usefulness expired. His life illustrates how CIA treated its assets and contacts when their activities rendered them inconvenient.”

While Mellen and others keep saying Oswald, and DeMohrenschildt were being run by the CIA, from my readings of the same material, they could have just as easily been operating, knowingly or unknowingly with Army Intelligence or the Office of Naval Intelligence (ONI), as both were heavily involved in these nefarious affairs, as the recently released government records attest.

Besides meeting with CIA officers, DeMohrenschildt and his Haitian sidekick Clem Charles also meet with Dorothe Matlack, Assistant Director of the Office of the Domestic Exploitation Section, Army Chief of Staff for Intelligence. Mellen is the first to point out the significance of 66th Military Intelligence Group (MIG) and 902 MIG – “90 Duce,” the mysterious and secret units that kept track of all these nefarious activities.

Smack in the middle of things is our old friend Col. Sam Goodhue Kail, an office associate of Matlack who we know from his days as the Military attaché in the American embassy in (June 3, 1958 -  Jan. 4, 1961) when he worked with such Dealey Plaza luminaries as David Morales, Antonio Veciana and David Atlee Phillips.

In the course of her work Mellen also utilized the tenacious research of Bruce Adamson, whose chronology and dozen books on George DeMohrenschildt certainly makes him an authority on the man, and the cryptic files of the late J. Harrison, a former policeman and JFK assassination researcher whose boxes of records she had access to. Mellen also draws extensively on the official files and records released under the JFK act, although many of the government’s records on DeMohrenschildt and his associates remain sealed for reasons of “national security.”

And Mellen has interviewed a few important characters who are still alive, especially Joseph F. Dryer, though few others live to tell their tales.

What I didn’t understand at first is why she left out some important well-known details, and figured, just as she wrote a follow up biography on Jim Garrison after “Farewell to Justice,” there was another book in the works. And indeed there is as I have since learned there are two more books on the way, all three of which utilize some of the same sources and general material, but focus on different geographical locations. Also in production is a book on the Texas Mafia, and a third - “The Great Game in ,” which rounds out the trilogy and uses “the Cuban Revolution, as a backdrop to examine the CIA’s inner workings during the fifties and sixties.”

Besides Joan Mellen’s series of books, David Lifton, Russ Baker, Bill Simpich and Greg Parker are among the serious JFK assassination researchers who are also diving into these subjects and trying to make sense of it, and should be published in the coming year.

Now we just have to get down to the nitty-gritty, fill out the map’s side roads, back alleys and gutters and shine some light in to the murky darkness to see what’s there.

You go first, I got your back.

It's going to be harrowing watching all the LHO defamation and single bullet theory media nodding dogs as the 50th approaches.