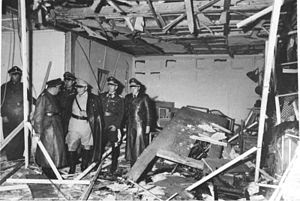 "I regard this as the best lead we have ever had as to who may have been involved in the assassination of President Kennedy." - Jim Lesar

Washington D.C., July 20, 2018. Almost seventy-five years to the day after the July 20, 1944 German military plot to kill Adolph Hitler failed, a Washington D.C. District Court judge ruled the CIA fulfilled its legal obligations in failing to find any record whatsoever of their “detailed study” of the plot to use against Fidel Castro.

On July 17, U.S. District Court Judge Trevor N. McFadden ruled in favor of the CIA in its failed search for the records pertaining to the 1963 study, deciding they had conducted an adequate search for records requested by Freedom of Information Act (FOIA) attorney Jim Lesar and the Assassinations Archives and Research Center (AARC).

Lesar's request is primarily based on a clear reference to “the plot to kill Hitler….being studied in detail” as an “historical parallel to the CIA’s then ongoing efforts to overthrow Fidel Castro,” contained in a September 25, 1963 memorandum by Colonel Walter Higgins, adjunct to General Victor Krulak, of the meeting of the Joint Chiefs of Staff.

While the Chairman of the Joint Chiefs, General Maxwell Taylor was on a special mission to Vietnam, Air Force Chief of Staff Gen. Curtis LeMay chaired the meeting that included a briefing by the CIA’s Desmond FitzGerald on CIA covert operations against Cuba, for the purpose of coordinating military support for those actions.

When the Higgins Memo was released under the JFK Act of 1992 and placed in the JFK Collection at the National Archives and Records Administration (NARA), it was scanned and posted at the MaryFerrell.org web site among the assassination records of the Joint Chiefs of Staff. When it came to the attention of FOIA attorney Jim Leasar, director of the AARC, he filed a FOIA request in 2012.

After two official letters from the CIA denying they held any records related to the July 20, 1944 plot to kill Hitler, code named Valkyrie, they relented and claimed those denials were sent accidently, and they did have one document, an anti-communist Propaganda Guide, that refers to the celebrated anniversary of the plot, that it claimed was betrayed by German Communists.

The CIA claimed it searched all of its relevant files without locating a single document or reference, except for the one Propaganda Guide, that they released with redactions even though it was over a half-century old.

The CIA said it even searched their “Operational Files” that are not subject to FOIA inquiry, and questioned their official historian – David Robarge, who noted that the Office of Strategic Services (OSS) files of that July 1944 period were turned over to the NARA. But Lesar requested the CIA records on the “detailed study” of the Hitler assassination plots from September 1963, that should be in the CIA files.

Robarge wrote the official biography of John McCone, who was CIA director at the time of the assassination, a book that is still highly censored and redacted.

The judge ruled that, “Assassination Archives alleges that Exemption 6 (personnel and medical files) does not apply because disclosure of CIA personnel names and telephone numbers are important for sniffing out why administration errors occurred in this case,…” especially since the CIA admits two, not one but two denials of any records were sent out in error by accident.

The judge also took issue with the AARC’s contention that the release of the requested information would “…vindicate the public interest in the John F. Kennedy assassination.”

“And even if I accepted the Plaintiff’s proposition that public interest in the Kennedy assassination is relevant to this case, and relevant to the CIA’s diligence during these search efforts, that interest does not outweigh the privacy interests of CIA personnel in their names and phone numbers. The public’s interest in figuring out why two ‘no-records’ emails were mistakenly sent is miniscule at best….”

While I can’t address any of the legal issues, it is apparent that the Judge has but did not read my declaration to the court that outlined in detail the associations between the Valkyrie Plot to kill Hitler and the assassination of President Kennedy, that are not tenuous.

After the ruling Jim Lesar said, “America lost over a million killed and wounded fighting World War II, but the CIA can only find one document related to plots to kill Hitler, even though it was conducting a detailed study of such plots in September 1963 as part of plans to overthrow Castro.  How was such "detailed" study conducted if the CIA had only one document to work with?  Maybe the Tooth Fairy knows.  The CIA appears to have no clue."

Attorney Dan Alcorn, who also worked on the case, said, "It remains a mystery as to what has happened to CIA records documenting its detailed study of the plot to assassinate Hitler in the fall of 1963 to develop a plan to overthrow Fidel Castro."

HIGGINS MEMO AT JFKCOUNTERCOUP2 - JFKCountercoup2: The Higgins Memo of JCS Meeting of Sept. 25, 1963

Thanks for sharing this rather informative/interesting piece, Mr. Kelly, very telling that the Agency cannot even get their own "lies", err, stories straight. Sad day for democracy when a mere agency of a government for, of and by the People becomes untouchable.