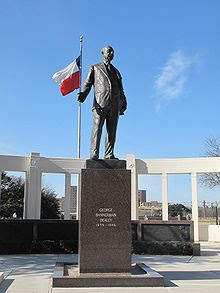 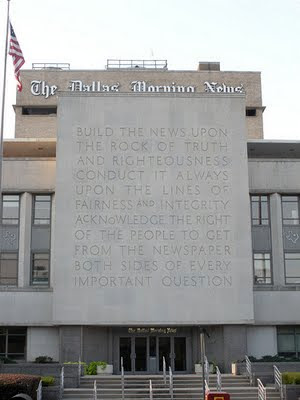 I've corrected a mistake in Part 3 of my series Journalists & JFK - The Real Dizinformation Agents at Dealey Plaza.

I knew that George Bannerman Dealey owned the Dallas Morning News, and not the Dallas Times Hearld, but got it wrong, and now I stand corrected (thanks to Gary Mack). Any other corrections should be addressed to me - Bkjfk3@yahoo.com.

I also knew that Dealey, for whom Dealey Plaza is named, was born in England and came to America where he worked as a journalist in Texas, working his way up from reporter to editor, publisher and owner. Dealey's call for the improvement of the blighted area led to naming it after him, and now universally known as the scene of the assassination of President Kennedy.

I also know that Ruby's pal Tony Zoppi worked for the Dallas Morning News, and Ruby's alibi at the time of the assassination was that he was in the office of one of the advertising managers, from whose window you could see Dealey Plaza.

Seth Kantor, Jim Lehrer and Connie Kritzberg worked for the Dallas Times Heard, the afternoon daily paper that was purchased for $52 million by the Dallas Morning News in 1991 and closed down the next day.

If you walk out the front door of Dallas' Union train station, the Dallas Morning News building is just across the street by the park. Inscribed on the wall by the front door are the following words.

Probably attributed to George Bannerman Dealey, the quote is wrong on one count, in that there are more than two sides to every important question.
Posted by William Kelly at 8:23 PM