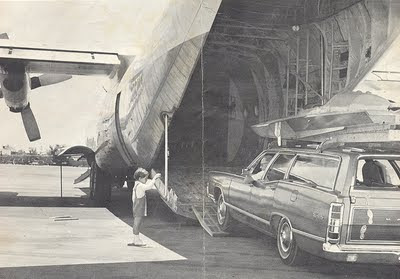 Growing up the son of Fred “Doc” Moor, Jr., legendary owner-operator of Southern Air Transport, Moor III says he didn’t know his dad had made a deal with the devil, or was it an act of patriotism that led to his partnership with the CIA?

Like Ralph Cox, the owner of US Overseas Airlines out of the Cape May Country Airport in New Jersey, Moor III claims he first learned of the association when he read it in the newspapers.

“Fly Me, I’m Spooky’ was the title of a Wall Street Journal article in early 1973. Reading that article gave me my first clue that Southern Air Transport, owned by my father, F. C. ‘Doc’ Moor, had become an asset of the Central Intelligence Agency.”

“The article pointed out, in 1960, Percival Flack Brundage, Director of the Bureau of the Budget under President Eisenhower, and Perkins McGuire, Assistant Secretary of Defense under Mr. Eisenhower, paid Dad $260,000 and Stanley Williams $40,000 for their interests in Southern Air Transport. After that purchase, SAT was awarded a government contract or inter island operations among Japan, the Philippines, and Taiwan. Competitors objected that SAT had no operating experience in that part of the world and no current equipment to perform on the contracts. One of them was told that SAT was ‘owned or controlled by the Central Intelligence Agency that no objections would be heard.’”

“Dad started Southern Air Transport in 1947 and grew it into a modestly successful company. Dad had told me in a phone conversation in 1960 or 1961 that he had sold the company and was staying with the new organization as Chairman. He did not elaborate and I did not push for particulars. Certainly I had no idea of any connection to the CIA. In a later conversation, he told us that he had a trip planned to the west coast and would stop in Tuscon to see us as he ‘had a lot to tell us.’ He died before he made that trip.”

“I was appalled after reading the article. Had Dad done something illegal, was he some sort of criminal linked to all sorts of covert operations?”

“By all means, no, I felt. Dad had done what legions of other Americans have done, and continue to do so. He identified his dream and followed it to some success. That dream and its success, though led him to adventures he could have never dreamed of.”

In acknowledgements he recognizes former SAT employees Jerry Dobby, Stan Williams and Jack Pooser for contributing their memories, and from them we get some of the operational stories that personified the flying cowboy reputations of all CIA owned airlines, though especially Air America, now best remembered for the lighthearted Hollywood comedy adventure movie Mel Gibson made on the premise.

Particularly interesting is the early history of this and other airlines, like PAN AM and their Florida facilities, and how SAT flew in and out of Dinner Key, which the CIA also used to facilitate their Cuban operations in the early 1960s.

Unfortunately, Moor’s history focuses primarily on the early years of SAT, when his dad bought some war surplus planes and began ferrying people and supplies to places that the regularly scheduled airlines didn’t go.

Much of the book concerns his family’s early days and his father’s extra-curricular activities as a motor boat racer, and just when you get to the part where the CIA comes in, well that’s another story.

As the title explains, this is the story of the early years of SAT, and “Then Came The CIA.”

That’s a shame because that’s where the real story lies, and apparently Moor once was in a position to learn much more as a banker for SAT’s CIA parent company, Intermountain Aviation.

After attending school in Arizona, Moor stayed there and working as a banker, and as he related, “By 1974 I had moved through many assignments at the Valley National Bank and was vice president and Manger of the Downtown Tuscon Office, the largest office outside of the Phoenix home office. One of my customers was Intermountain Aviation, who operated out of what was then called Pinal Airpark twenty or so miles north of Tuscon. They were good depositing and borrowing customers and I paid attention to them. A bit later, I found that Southern Air Transport and Intermountain Aviation were first cousins in the CIA family and I was relieved that the press, with its penchant for making mountains out of mole hills, never found out that the son of the guy in Miami was the banker to the outfit in Arizona.”

While most of the old time Non-Sched (Non-Scheduled airlines) owners are dead now, Ralph Cox is still chugging along down in Cape May County, and he wants to document exactly how the CIA came to take over these airlines and in many cases, put legitimate privately owned airlines out of business.

Since the air transport leg of covert operations is the week link that has led to the exposure or failure of so many – from the U2, Bay of Pigs and Kennedy assassination to the Iranian hostage rescue mission and Iran-Contra, it should be reviewed more closely, especially for its rich documentation and paper trail.

While Moor’s book is a necessary foundation for the study of the CIA airlines, it is only a prequel to the real story – of what happened after the CIA came aboard.

William Kelly
He can be reached at billkelly3@gmail.com

To read CIAir go to:

Posted by William Kelly at 2:24 AM