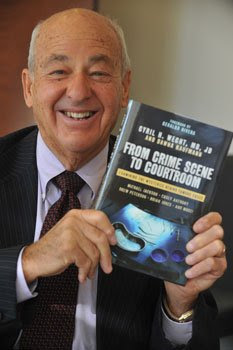 Cyril Wecht, a founding board member of COPA has a new book - From Crime Scene to Court Room.

At the age of 80, forensic pathologist Cyril Wecht said he's never been busier.

He conducts hundreds of autopsies a year, teaches at several local universities, performs consulting work for private attorneys, and recently released a book, "From Crime Scene to Courtroom: Examining the Mysteries Behind Famous Cases."

"I like what I do. I find it exciting and challenging. It's worthwhile," said Wecht of Squirrel Hill. "I have my wits, and I'm fortunate to have good health."

Wecht's newest book, his seventh for the general public, focuses on seven high-profile cases, including those of Michael Jackson and Casey Anthony. The book hits store shelves in the midst of the trial of Dr. Conrad Murray, who is accused of involuntary manslaughter for overmedicating Jackson, and just a few months after a Florida jury acquitted Anthony on charges of murdering her daughter, Caylee. The 25-year-old was convicted of four misdemeanor counts of lying to authorities.

"The Michael Jackson case is going on now, and I go into great detail about it. Similarly with the Casey Anthony case — it's not superficial; it's detailed observations," Wecht said. "With the Michael Jackson case, we did not know when the trial would be held, but it's indeed to our advantage in that sense."

Wecht co-authored the 315-page book with Dawna Kaufmann of Los Angeles, a crime writer who has covered hundreds of high-profile homicide cases for national publications, including the National Enquirer and Globe. It's the second book the two have co-authored.

"When Casey Anthony's verdict came in, I rewrote that chapter," Kaufmann said. "That's kind of why we picked those two (the Jackson and Anthony cases). They're so fresh."

Wecht said he was involved on some level with all the cases in the book. In addition to the Jackson and Anthony cases, it includes chapters about Air Force Col. Philip Shue of Texas, whose bizarre death was an unsolved mystery, either homicide or suicide; Rolling Stones band member Brian Jones, whose 1969 drowning death in his pool left people wondering if it was an accident; Illinois police Officer Drew Peterson, who was accused of killing his wife; and Carol Anne Gotbaum, a Manhattan mother who died in police custody in Phoenix.

"I can't read novels. Why bother when there are so many real mysteries?" Kaufmann said.

The book also examines the case of Gabrielle Bechen, a Greene County 12-year-old girl who was raped and murdered in June 2006 on a Dunkard Township farm. A jury convicted Jeffrey Martin, 54, of the crime, and he remains on death row.

Wecht resigned as Allegheny County coroner in 2006 when a federal grand jury accused him of using his position to defraud Allegheny and other counties. A jury in 2008 deadlocked on the charges, and prosecutors eventually withdrew them after a judge tossed out much of the evidence.

The income from his work motivates him, too, Wecht said.

"I need the money. My lawsuit cost millions. I'm digging out from that, but that's not my primary reason (for continuing to work and write)," Wecht said. "I absolutely intend to keep working."

Bobby Kerlik is a Pittsburgh Tribune-Review staff writer and can be reached at 412-391-0927 or via e-mail, bkerlik@tribweb.com.
Posted by William Kelly at 8:47 PM

Found your blog very useful and valuable. Expect to hear a lot more info from this blog soon. Thanks!