Happy Birthday to the Ultimate Spook - David A. Phillips 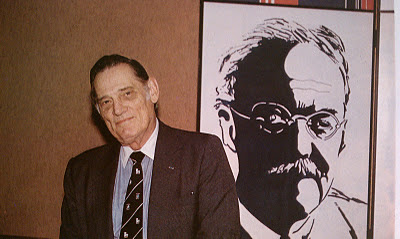 Sometimes an actor, sometimes a fan,
sometimes a chief, always a man,
Loved by the women, and feared by the men,
who will put Humpty Dumpty back together again?

Scenes burnt beneath his boots from 20,000 Ft.
twice he fell into the mist, there was no time for sleep.
Under fire in arid office, under strain in jungle rains,
he cried once to a tree for hours, yet he carried well his pain.

3 older brothers shared the cause, the truth now if it kills,
the battle rages on today, the war is fueled by wills.
He tried to help the weak survive, when being stepped on by the strong,
when chaos reigned the world of reason, an infant full of dawn

His children are alert and brave, Their fight is not denied,
they roam the world and carry on, they would like to be defied,
2 women brought them into life, his memory lives in them,
and we are here because he's gone, we know who was his friend

If all men were angels, go the words, we seek to hope this so,
he made mistakes as do we all, but which are those we know,
we shan't be sad, he lived quite full, he knew this is no bloody game,
and if God forgives transgressions, then I guess we all can do the same.

Respect and love are intertwined, his dignity not bled,
Have a good time I said in parting, he knew just what I meant
So pass in peace my Father's brother, I feel you were my friend.
It's nice to know that you have found, that this is not the end.

You can now also find these lyrics at this site: http://shawnphillips.wordpress.com/2011/01/27/impressions-of-david-atlee-phillips/

Many thanks to Steve Rosen for providing the photo and poem.
http://limitedhangout.tumblr.com/
Posted by William Kelly at 5:43 PM