Defense Department (DOD) Records Related to the Assassination of JFK

Department of Defense Records Related to the Assassination of President Kennedy
October 26, 1995 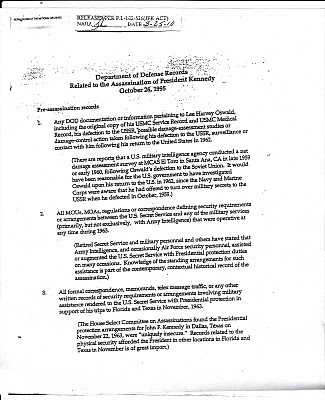 (There are reports that a U.S. military intelligence agency conducted a net damage assessment survey at MACS El Toro in Santa Ana, CA in late 1959 or early 1960, following Oswald's defection to the Soviet Union. It would have been reasonable for the U.S. government to have investigated Oswald upon his return to the U.S. in 1962, since the Navy and Marine Corps were aware that he had offered to turn over military secrets to the USSR when he defected in October, 1959..... 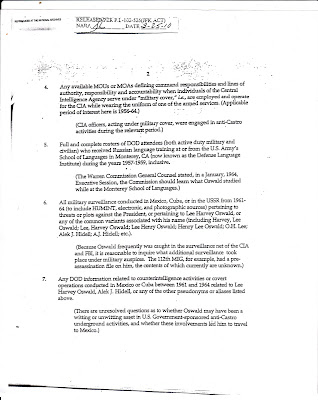 4. Any available MOUs or MOAs defining command responsibilities and lines of authority, responsibility and accountability when individuals of the Central Intelligence Agency serve under "military cover," i=.e., are employed and operate for the CIA while wearing the uniform of one of the armed services. (Applicable period of interest here is 1956-1964).

(CIA officers, acting under military cover, were engaged in anti-Castro activities during the relevant period.)

5. Full and complete rosters of DOD attendees (both active duty military and civilian) who received Russian language training at or from the U.S. Army's School of Languages in Monterey, CA (now known as the Defense Language Institute) during the years 1957-1959, inclusive.

(The Warren Commission General Counsel stated, in a January, 1964 Executive Session, the Commission should learn what Oswald studied while at the Monterey School of Languages.)... 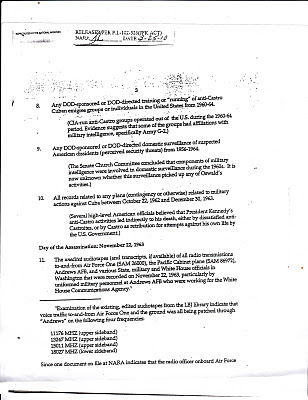 8. Any DOD-sponsored or DOD-directed training or "running" of anti-Castro Cuban emigree groups or individuals in the United States from 1960-64.
(CIA-run anti-Castro groups operated out of the U.S. during the 1960-64 period. Evidence suggests that some of the groups had affiliations with military intelligence, specifically Army G-2)... 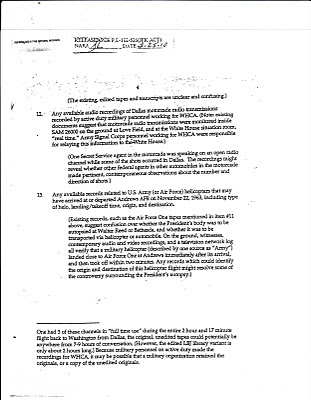 (The existing, edited tapes and transcripts are unclear and confusing)

12. Any available audio recordings of Dallas motorcycle radio transmissions recorded by active duty military personnel working for WHCA. (Note: existing documents suggest that motorcade radio communications were monitored inside SAM 26000 on the ground at Love Field, and at the White House Situation room, "real time." Army Signal Corps personnel working for WHCA were responsible for relaying this information to the White House.)

(One Secret Service agent in the motorcade was speaking on an open radio channel while some of the shots occurred in Dallas. The recordings might reveal whether other federal agents in other automobiles in the motorcade made pertinent, contemporaneous observations about the number and direction of shots.)

13. Any available records related to U.S. Army (or Air Force) helicopters that may have arrived at or departed Andrews AFB on November 22, 1963,including type of helo, landing/takeoff time, origin, and destination.

(Existing records, such as the Air Force One tapes mentioned in item #11 above, suggest confusion over whether the President's body was to be autopsied at Walter Reed or Bethesda, and whether it was to be transported via helicopter or automobile. On the ground, witnesses, contemporary audio and video recordings, and a television network log all verify that a military helicopter (described by one source as "Army") landed close to Air Force One at Andrews immediately after its arrival, and then took off within two minutes. Any records which could identify the origin and destination of this helicopter flight might resolve some of the controversy surrounding the President's autopsy.)
_________________________________

One had 3 of these channels in "full time use" during the entire 2 hour and 17 minute flight back to Washington from Dallas, the original, unedited tapes could potentially be anywhere from 7-9 hours of conversation. (However, the edited LBJ library variant is only about 2 hours long.) Because military personnel on active duty made the recordings for WHCA, it may be possible that a military organization retained the originals, or a copy of the unedited originals. 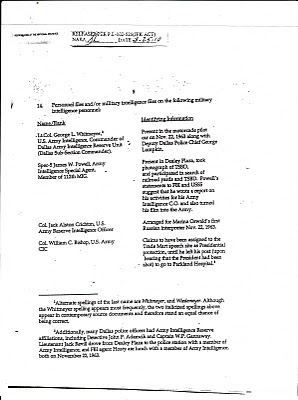 Present in the motorcade pilot car on Nov. 22, 1963
along with Deputy Dallas Police Chief George Lumpkin.

Present in Dealey Plaza, took
photograph of TSBD,
and participated in search of
the railroad yards and TSBD. Powell's
statements to the FBI and USSS
suggest that he wrote a report on
his activities for his Army
Intelligence C.O. and also turned
his film into the Army.

Claims to have been assigned to the
Trade Mart speech site as Presidential
protection, until he left his post (upon
hearing the President had been
shot) to go to Parkland Hospital. 3
_______________________

2. Alternative spellings of the last name are Whitmayer, and Wiedemeyer.... 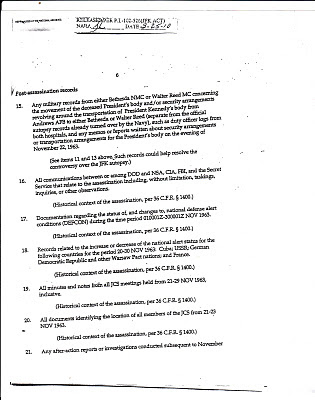 21. Any after-action reports or investigations conducted subsequent to November 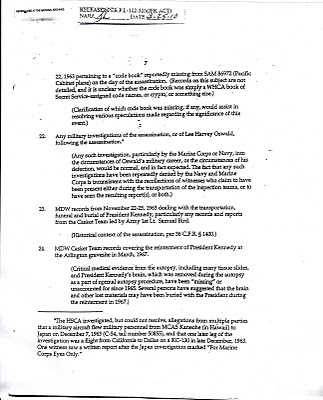 22,1963 pertaining to a "code book" reportedly missing from SAM 86972 (Pacific Cabinet plane) on the day of the assassination. (Records on this subject are not detailed, and it is unclear whether the code book was simply a WHCA book of Secret Service-assigned code names, or ctypto, or something else.)

(Clarification of which code book was missing, if any, would assist in resolving various speculations made regarding the significance of this event.)

4. The HSCA investigated, but could not resolve, allegations from multiple parties that a military aircraft flew military personnel from MCAS Kaneohe (in Hawaii) to Japan on December 7, 1963 (C-54, tail number 50855), and that one later leg of the investigation was a flight from California to Dallas on a KC-130 in late December, 1963. One witness saw a written report after the Japan investigation marked 'For Marine Corps Eyes Only."
Posted by William Kelly at 12:34 AM

What is the source of this document? It reads like a wish list for HSCA or AARC.

A page 5 footnote asserts that Jack Revill rode from Dealy Plaza to the Dallas police station with a member of Army Intelligence. Does anyone know the source of this allegation, or the name of the Army Intelligence person?

In Revill's Warren Commission deposition, he states that he rode from the TSBD to DPD with some other DPD personnel, whom he names in the testimony. Was one of them a member of Army Intel, or does anybody know?

The Assassination Records Review Board is the source of this document.

Thanks. I was searching for information on the intelligence man who was alleged to have made contact with Dallas policeman Jack Revill, in Dealy Plaza, in the immediate aftermath of the JFK assassination, when I found a link to this page in my search results. By the way, I very much enjoyed the Dylan and Ochs articles on your site, which I had read previously.

I read somewhere that a military intelligence man in the company of Revill might have been the source of the description of Oswald as 5'-10", 160#, and 30-something, said description having been broadcast on the Dallas police radio at about 13-15 minutes after the JFK ambush. This description nearly matches the so-called "marked card" description in the publicly revealed Oswald 201 file.

However I can't find where I read about this now. I should have made a note. It also said that Revill used the "marked card" name of Lee Henry Oswald when he typed up a list of TSBD employees dated a few hours after the ambush, and also a "marked card" address if I recall correctly.

So the army intel guy seems like he might be a key player in the early ID of Oswald as the Dallas police department's suspected JFK assassin and/or patsy, pending further verification or even just a name.