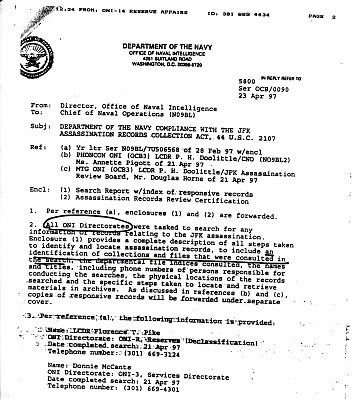 From: Director, Office of Naval Intelligence
To: Chief of Naval Operations (NO9BL) 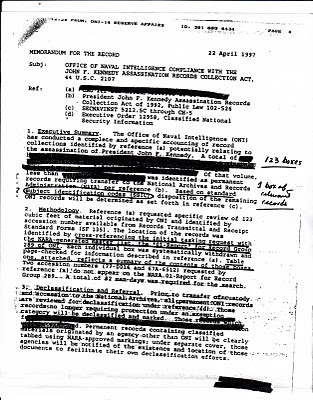 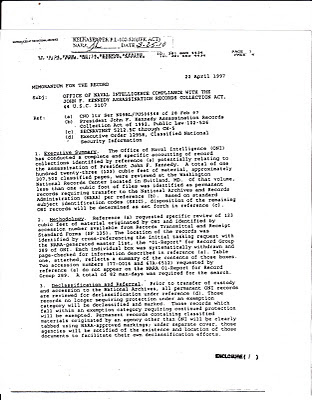 1. Executive Summary: ....A total of [one hundred twenty-three (123) cubic feet of material, approximately 307,500 classified pages, were reviewed at the Washington National Records Center located in Suitland, MD.] Of that volume, less than [one cubic foot of files] was identified....

[written on the side: 123 boxes - rather than 123 cubic feet and 1 box of relevant records rather than one cubic foot of files.] 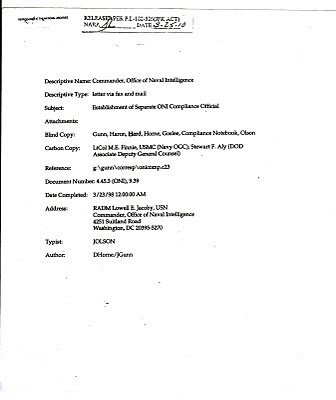 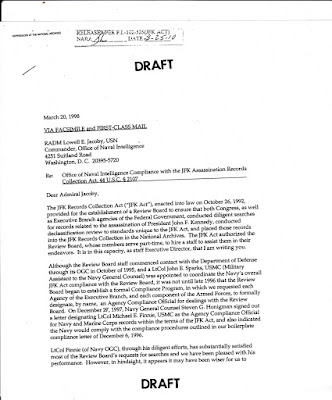 The JFK Records Collection Act ("JFK Act"), enacted into law on October 26, 1992, provided for the establishment of a Review Board to ensure that both Congress, as well as the Executive Branch agencies of the Federal Government, conducted diligent searches for records related to the assassination of President John F. Kennedy, conducted declassification review standards unique to the JFK Act, and placed those records into the JFK Records Collection in the National Archives....

Lt. Col. Finnie (of Navy OGC), through his diligent efforts, has substantially satisfied most of the Review Board's requests for searches and we have been pleased with his performance. However, in hindsight, it appears it may have been wiser for us to 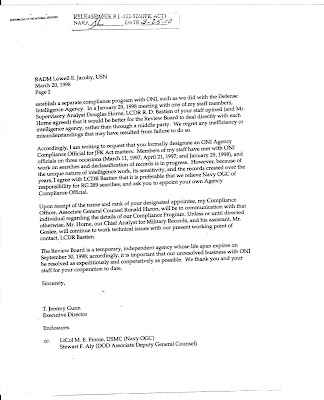 establish a separate compliance program with ONI, such as we did with the Defense Intelligence Agnecy.....

Accordingly I am writing to request that you formally designate an ONI Agency Compliance Official for JFK Act matters.... 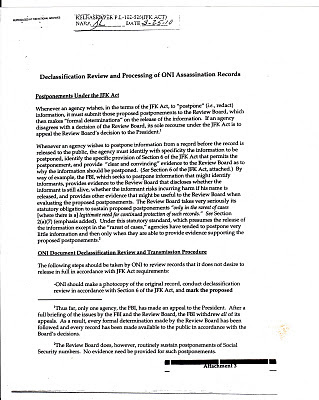 Postponements Under the JFK Act

Whenever an agency wishes, in the terms of the JFK Act, to "postpone" (i.e., redact) information, it must submit those proposed postponements to the Review Board, which then makes a "formal determination" on the release of the information.... 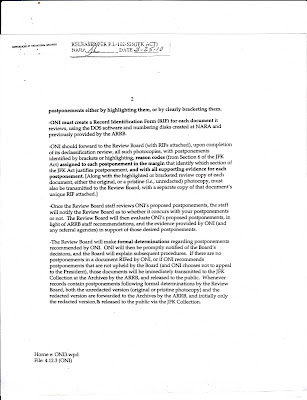 - ONI must create a Record Identification Forum (RIF) for each document it reviews, using the DOS software and numbering disks created at NARA and previously provided by the ARRB.

- ONI should forward to the Review Board (with RIFs attached), upon completion of its declassification review,.... 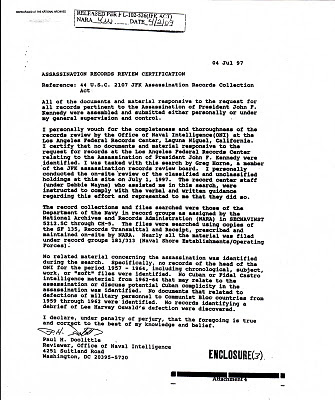 ...I personally vouch for the completeness and thoroughness of the records review by the Office of Naval Intelligence (ONI) at the Los Angeles Federal Records Center, Laguna Niguel, California....No related material concerning the assassination was identified during the search. Specifically, no records of the head of ONI for the period 1957-1964,...no Cuban or Fidel Castro intelligence material from 1962-64 that may relate to the assassination or discuss potential Cuban complicity in the assassination was identified. No documents that related to the defections of military personnel to Communist Bloc countries from 1959 through 1962 were identified. No records identifying a debrief of Lee Harvey Oswald's defection were discovered. - PHD sig 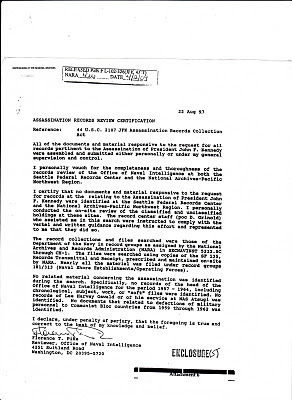 All of the documents and material responsive to the request for all records pertinent to the Assassination of President John F. Kennedy were assembled and submitted either personally or under my general supervision and control....No related material concerning the assassination was identified during the search. Specifically, no records of the head of the Office of Naval Intelligence for the period 1957 - 1964,...No records of Lee Harvey Oswald or of his service at NAS Atsugi was identified. No documents that related to defections of military personnel to Communist Bloc countries from 1959 through 1962 was identified. - FTP sig. 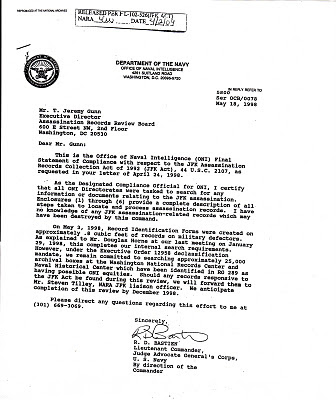 This is the Office of Naval Intelligence (ONI) Final Statement of Compliance with respect to the JFK Assassinations Records Collection Act of 1992 (JFK ACT), 44 U.S.C. 2107, as requested in your letter of April 24, 1998.

As the Designated Compliance Offical for ONI, I certify that all ONI Directories were tasked to search for any information or documents relating to the JFK assassination...I have no knowledge of any JFK assassinatio-related records which may have been destroyed by this command.

...this completes our internal search requirements. However, under the Executive Order 12958 declassification mandate, we remain committed to searching the approximately 25,000 archival boxes at the Washington National Records Center and Naval Historical Center which have identified in RG 289 as having possible ONI equities... 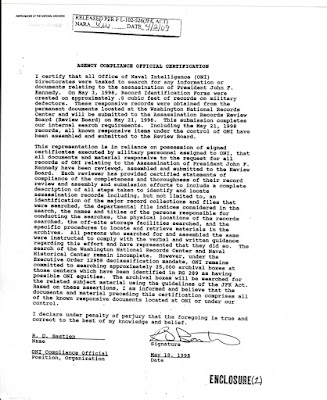 I certify that all Office of Naval Intelligence (ONI) Directories were tasked for search of any information or documents relating to the assassination of President John F. Kennedy. On May 3, 1998, Record Identification Forms were created for approximately .8 cubic feet of records on military defectors. These responsive records were obtained from the permanent documents location at the Washington National Records Center and will be submitted to the Assassination Records Review Board (Review Board) on May 21, 1998. This submission completes our internal search requirements. Including the 21, 1998 records, all known responsive items under the control of ONI have been assembled and submitted to the Review Board.

...All persons who searched for and assembled the same were instructed to comply with the verbal and written guidance regarding this effort and have represented that they did so. The search of the Washington National Records Center and Naval Historical Center remain incomplete. However, under the Executive Order 12958 declassification mandate, ONI remains committed to searching approximately 25,000 archival boxes at those centers which have been identified in RG 289 as having possible ONI equities. The archival boxes will be searched for the related subject material using the guidelines of the JFK Act. Based on these assertions, I am informed and believe that the documents and material preceding this certification comprises all of the known responsive documents located at ONI or under our control.

I declare under penalty of perjury that the foregoing is true and correct to the best of my knowledge and belief. - R. D. Bastien Sig ONI Compliance Official, May 18, 1998
Posted by William Kelly at 1:33 PM