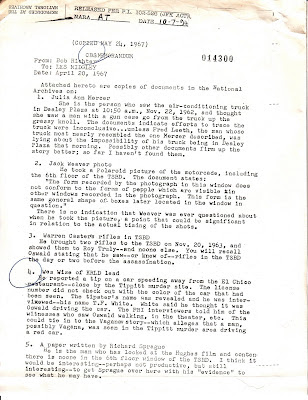 Attached hereto are copies of documents in the National Archives on:

1) Julie Ann Mercer She is the person who saw the air-conditioning truck in Dealey Plaza at 10:50 a.m. Nov. 22, 1962 (Sic), and thought she saw a man with a gun case go from the truck up the grassy knoll. The documents indicate efforts to trace the truck were inconclusive…unless Fred Leeth, the man whose truck most nearly resembled the one Mercer described, was lying about the impossibility of his truck being in Dealey Plaza that morning. Possibly other documents firm up the story better; so far I haven’t found them.

2) Jack Weaver photo He took a Polaroid picture of the motorcade, including the 6th floor of the TSBD. The document states: “The form recorded by the photograph in this window does not conform to the forms of people which are visible in other windows recorded in the photograph. This form is the same general shape of boxes later located in the window in question.” There is no indication that Weaver was ever questioned about when he took the picture, a point that could be significant in relation to the actual timing of the shots.

3) Warren Caster’s rifles in TSBD He brought two rifles to the TSBD on Nov. 20, 1963, and showed them to Roy Truly – and noone else. You will recall Oswald stating that he saw – or knew of – rifles in the TSBD the day or two before the assassination.

4) Wes Wise of KRLD lead He reported a tip on a car speeding away from the El Chico restaurant – close by the Tippitt murder site. The license number did not check out with the color of the car that had been seen. The tipster’s name was revealed and he was interviewed – his name T. F. White. White said he thought it was Oswald driving the car. The FBI interviewers told him of the witnesses who saw Oswald walking, in the theater, etc. This could tie in to the Vaganav story – which alleges that a man, possibly Vegana, was seen in the Tippit murder area driving a red car.

5) A paper written by Richard Sprague. He is the man who has looked at the Hughes film and contends there is noone in the 6th floor window of the TSBD. I think it would be interesting – to get Sprague over here with his “evidence” to see what he may have.

"...He (Mather) and his wife met Wise and Dana Bartell, “from the N.Y., wire service” in the Old Warsaw Restaurant located in Oak Lawn. Dinner and discussion of these curious events didn’t seem to accomplish much, as they came away without understanding how that mechanic could have written down the tag listed to “Carl’s ’57 Plymouth.” Several months later saw the (CBS) documentary on TV with her name listed in the credits, but no mention of the tag number episode."

When Mather and his wife sat down to dinner with Wise and two CBS News editors, Mather was too nervous to eat. They asked him questions and tried to figure out what they considered to be an amazing coincidence – the accused assassin of the President and killer of a Dallas policeman is seen in a car that belongs to a good friend of the policeman near the scene of the murder.

All Mather would say was, “Put yourself in my shoes. I just can’t explain it.”

CBS News never used the material they developed on Mather and his association with Tippit, if they developed anything at all, but Mrs. Mather’s name is listed among the credits of one of the CBS News documentaries on the assassination.

As Wes Wise, who worked for the Dallas CBS outlet puts it, “There isn’t a reporter in the world, including this one, who wouldn’t love to uncover something, anything that would decisively reverse or positively confirm the current weight of the evidence in this case. But despite years of trying, we at CBS News have not done that, and neither has anyone else.”

"Asked to describe the F.B.I.’s efforts, Barbara said that one day an agent came to the house. This was at 4309 Colgate Lane, the Garland address they moved from 2018 Garland in 11/61, and he inquired about their tags. She pointed out her tags on the old Ford station wagon and advised Carl had the ’57 Plymouth at work."

"No, they never owned a red auto of any type. Again she doesn’t recall the date, but it was when the newer tags were in effect anyway. She didn’t hear from the agent again and Carl didn’t hear at all. What seemed like six weeks later, a second agent came to the same house and interviewed Barbara – again at home alone during the day – and he, too, was interested in the fact that a tag listed to Carl was observed on a different type of vehicle in a different part of town."

"When she indicted the first agent didn’t understand it, either, he seemed surprised another agent had been ahead of him. This seemed to cause his interest in the matter to wane and he left. Like the first agent, he didn’t return, nor did he interview Carl."
Posted by William Kelly at 3:34 PM