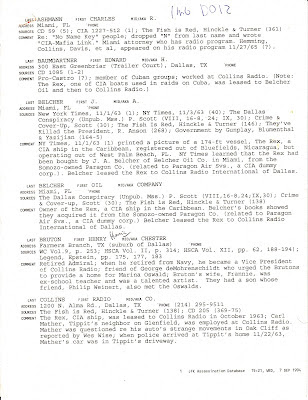 Mary Ferrell had the most comprehensive index of government records on the assassination, including name and subject files that include the following information on records related to Collins Radio. Many thanks to Rex Bradford for scanning Mary's records and making them available on line.

BAUMGARTNER, EDWARD H.
300 East Greenbriar (Trailer Court), Dallas, TX
CD 1085 (1-2)
Pro-Castro (?); member of Cuban groups; worked at Collins Radio. (Note: The Rex, one of the CIA boats used in raids on Cuba, was leased to Belcher Oil and then to Collins Radio. 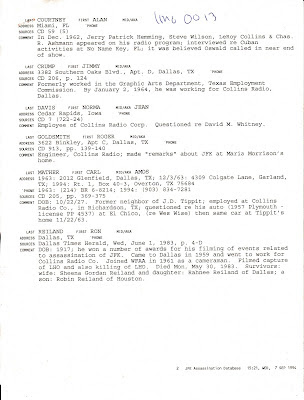 REILAND, RON
Dallas, TX
Dallas Times Hearld, Wed., June 1, 1983, p. 4-D
DOB: 1917; he won a number of awards for his filming of events related to assassination of JFK. Came to Dallas in 1959 and went to work for Collins Radio Co. Joined WFAA in 1961 as a cameraman. Filmed capture of LHO and also killing of LHO. Died Mon. May 30, 1983. Survivors: wife: Sheena Gordon Reiland and daughter: Rahnee Reiland of Dallas; a son: Robin Reiland of Houson.
Posted by William Kelly at 3:45 PM

Oswald called in on the radio show?
That would be interesting to listen to...

Yes, and he called in on the radio show out of Florida on the Cuban situation, and he also called in on a New York AM radio talk show hosted by Long John Nebel, who later became the husband of Candy Jones, the model who became a CIA MKULTRA victim.

I have the candy jones book,The Control of Candy Jones, an important tangent in the world of MK ULTRA, since it's a successful mind control operation.
Does a recording of the Florida call in show exist?
I am sure others would Ike to hear it.
Scott

I don't know if the show was taped but if you find it let me know. The South Florida Research Group should know the answer to that one.

http://freepages.genealogy.rootsweb.ancestry.com/~genbel/july/flabelchers.html --- "There are now at least 6 generations of Belchers living in the South Florida area, all stemming from Samuel Anthony Belcher. They are all scattered from Miami to Ft. Myers and on up into Central Florida.
The name is still carried on by Samuel Anthony Belcher IV.
Edwin Newton Belcher, Sam Jr's brother has also carried his name to Edwin Newton Belcher III.
Margaret Belcher was a sister to Edwin Newton Belcher, Jr. and John Anthony Belcher, daughter of Edwin Newton Belcher.
Harold Louden Belcher served in WW II and died without any children.
All the Belchers were avid hunters and fishermen and they all had boats and were to be found, anywhere from the Bahamas to the Florida Keys where they also had a house on Islamorado as a base.
They worked hard and they played hard and they are still going strong.
Jane Watson Belcher"
E-Mail link at above url. Maybe she knows something.

Linda, do you know if the Florida Belcher Oil company family are related to Mae Belcher, who owned Belcher Oil in Dallas, possibly a service station, who David Ferrie made telephone calls to?