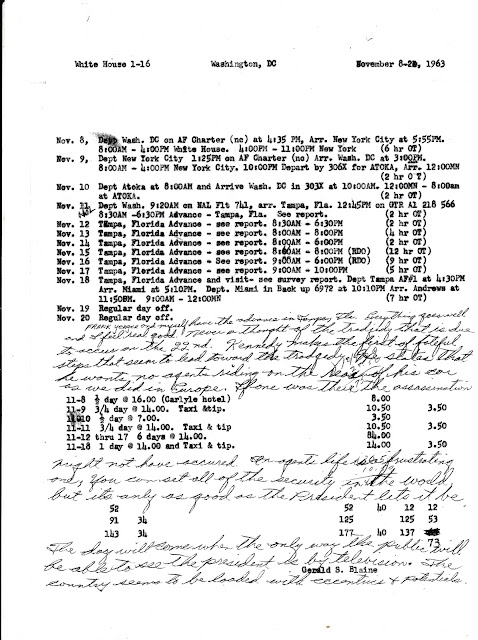 The Gerald Blaine documents consist of 28 pages – mostly duty assignments and travel vouchers, but there are two survey reports – one for Tampa and the one for a post assassination State Department reception between foreign dignitaries and LBJ. There is also a brief statement, a denial of having consumed any alcoholic beverages at the Press Club or the Cellar in .

All of these documents will be posted at JFKCountercoup.blogspot.com and given to Rex Bradford for posting at Mary Ferrell.

There are also three pages of handwritten notes, two pages written over a schedule dated from Nov. 8 to November 30 that I transcribe below:

“Frank Yeager and myself have the advance in Everything goes well and I feel real good. Never a thought of the tragedy that is due to occur on the 22nd. Kennedy makes the first of fateful steps that seem to lead toward the tragedy. He states that he wants no agents riding on the rear of his car as we did in . If one was there the assassination might not have occurred. An agent’s life is a frustrating one. You can set all of the security in the world, but its only as good as the President lets it be. The day will come when the only way the public will be able to see the president is by television. The country seems to be loaded with eccentrics and potentials.”

“I don’t think I have ever been filled so low emotionally by anything like the president’s assassination. There wasn’t a thing anyone could have done to stop it and the Secret Service did everything it could do. My shift worked in on the 22nd. We took them to the airport – They flew to , went to to sleep for the next nights duty. I had been asleep about ten minutes in the . Art Godfrey came in the room and almost broke the door down. ‘The boss was hit in .’ I was groggy but the sickening truth seemed to sink through and I couldn’t do anything but swing my legs over the bed and when the shock hit me I couldn’t find the strength to stand and I was hit with a sudden wave of chills. Then I tried to fight off the despair and asked Art if he was sure. He said he knew that Kennedy was shot, but didn’t know if it was fatal. We turned on the radio and finally got through on the security phone to hear the horrible truth. We just withdrew in our own thoughts.”

“We flew back in a SAC Bomber, myself, Art Godfrey, Bob Faison, Jerry O’Rourke, Paul Burns and John Bailey (National Democratic Chairman). We arrived back after Kennedy’s body and set up security at the Johnson residence. (What a disgusting settlement – Kennedy replaced by Johnson – like a pro-ball player going from the Yankees to the bottom of the league.)”

“They say that not many single things have an influence on history, but I am sure this one will.”

“Even though we could have done nothing to prevent it, nor was there anything anyone could have done except use a bulletproof automobile, we are all suffering from guilt and failure in our one task. The ordeal we were to all go through for the next few months was a sad one, but we all came out with a feeling of hope far greater than we had ever had before. We shall all be stronger for the experience in the years to come. President Kennedy left us a little of his courage and we lost not only a fine president but a friend we will never forget and always admire.” 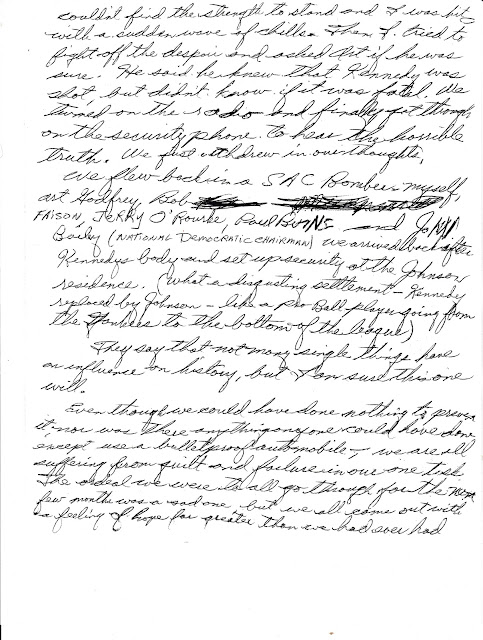 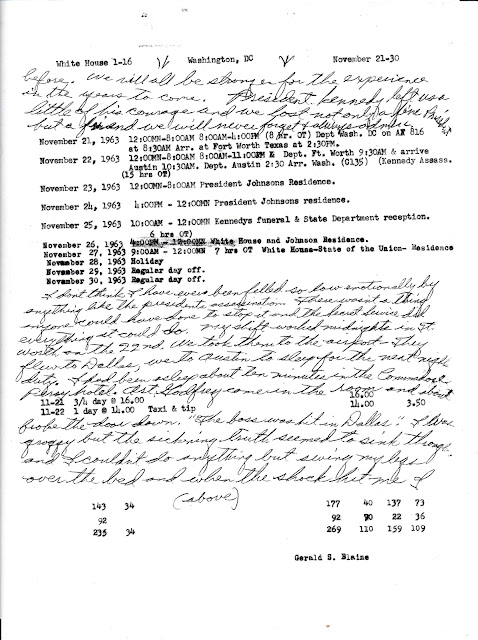 Blaime’s Statement regarding drinking at the Worth Press Club and Cellar reads:

I Gerald S. Blaine do make the following statement:

In , I worked the shift at the Hotel Texas on .
During my stay in , I consumed no Alcoholic beverages at either the Press Club or at the Cellar Inn.
Before my tour of duty started I had stopped by the Press Club for about 10 minues. This was prior to the on the 21st of November.
At 5:00AM to 5:10AM I was at the Cellar Inn for a coffee break, but had no beverage at all, coffee or otherwise. 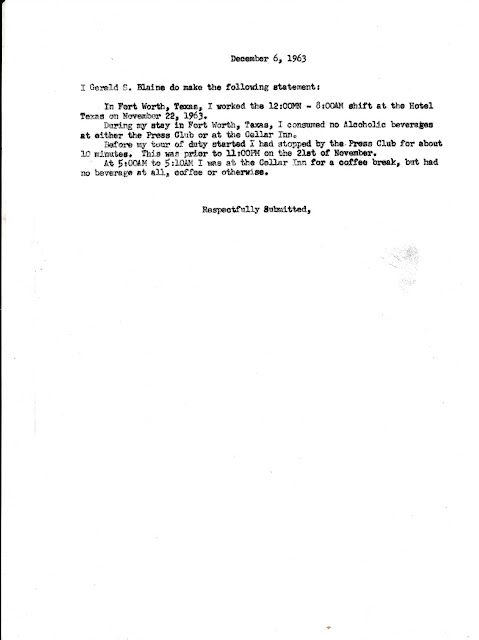 Posted by William Kelly at 3:17 PM

I am very suspicious that these handwritten notes were actually written many years later (2005 onward). Blaine is not credible.

I hear you Vince. I agree. He said he had two boxes of records and only turns over 28 pages?