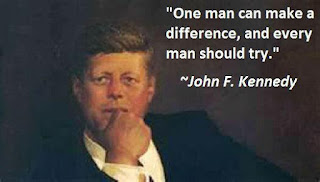 Many thanks to all those who have signed this petition.Petition | Free the JFK Files | Change.org J

Just because the and have told us no, they will not include the JFK assassination records in the 2013 National Declassification review as previously announced, they expect us to go home and come back in 2017. Well instead we are ramping up our efforts, continuing the petition drive, taking up a collection to put the petition in a full page ad in and trying to convince Congress to hold JFK Act oversight hearings. If you would like to contribute to this campaign - http://committeeforopenarchives.webs.com/apps/donations/

I am continuing my blog http://jfkcountercoup.blogspot.com/ and have posted an open letter I wrote to Judge John Tunheim chastising him for his mistaken remarks to a reporter concerning the current status of the JFK Assassination records. I don’t mean to be disrespectful but he should know better than anyone.

Jeff Morely and  Rex Bradford of Mary Ferrell Archives have started a new and important web site http://jfkfacts.org/  – “dedicated to elevating media coverage of the JFK assassination story, educating the young, and demanding release of still-secret government records related to JFK's murder. We aim to be the premier site for informed and civil discussion of the JFK tragedy. If you share these goals, consider supporting us. We are raising money on Indiegogo,com, the crowd-funding Web site. Check out Jeff Morley's introductory video which lays out our plans. We need your help. All donations are tax-deductible.”

Please support them and stay posted on all our activities by signing on our Facebook focus group http://www.facebook.com/groups/113396402136384/ .

We had previously only achieved 200 signatures on any petition, and it is because of our Facebook and social media friends that we now have ten times that many supporters, and we hope to continue to grow in numbers until we are recognized and achieve our modest goals.

All the best – Bill Kelly