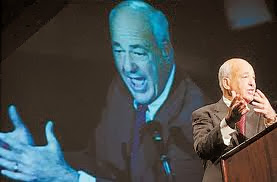 This might just be the Last Hurrah! for those who have tried to take the investigation of the assassination of President Kennedy seriously, as the still cold case homicide fades slowly from a unsolved murder with unresolved legal issues to an historical anomaly that will be argued about forever.

While the civic leaders in Dallas have disinvited the world from Dealey Plaza, the scene of the crime, so they can put on their own show, Dr. Cyril Wecht has invited all of his friends and longtime associates to Pittsburgh, where they will hold a symposium "Passing the Torch," with many if not most of the main researchers, writers, doctors, lawyers and journalists who have covered the assassination for much of the past fifty years.

Symposium - actually means "to drink together" - while discussing important matters, and what can be more important an issue than the murder of the president of the United States?

And what better place to do it than Pittsburgh, one of my favorite cities in the world, a city of good friends, nice neighborhoods, great taverns, fine food and spectacular sports.

It's also Cyril Wecht's home and where he spent many years as the official coroner and now has the Cyril Wecht Center for Forensic Sciences at Duquesne University in downtown Pittsburgh, which hosts a conference on various aspects of forensic sciences every year, and this is expected to be the last such event on this topic for quite some time.  So all of those who have been arguing and theorizing about what happened at Dealey Plaza for the past fifty years will have one last chance to make their case, and some good ones have lined up to do so.

Ben Wecht says: As you know, the Wecht Institute will be dedicating its 13th Annual Conference next fall to the JFK assassination, on the occasion of that event's 50th anniversary. The dates are Oct. 17 - 19, a full month ahead of the actual anniversary and all its attendant hype. The location is our Duquesne University campus here in Pittsburgh, though our reach, via streaming video, will be global.


In keeping with the Institute's mission, the program will address a broad spectrum of scientific, investigative and legal issues in the case, with the overarching goal of enhancing our collective understanding of what happened through interdisciplinary presentations and discussion. The title of the conference, in reference both to the famous line in JFK's inaugural address and to the "new generation of Americans" who must soon assume responsibility for the ongoing study and, perhaps, ultimate resolution of the most infamous of cold cases, is Passing the Torch. Among others, it is our hope to reach and impact thousands of young people, both on-site and via the Internet.


Passing the Torch
An International Symposium on the 50th Anniversary of the Assassination of President John F. Kennedy
October 17-19, 2013


Following up on its world-renowned 40th anniversary conference, the Wecht Institute is pleased to announce its plans to re-convene many of the leading scientific and legal experts on the murder case that has fascinated and perplexed us for decades.  As the JFK assassination and many of its witnesses, investigators and researchers begin to recede into history, this symposium is intended in large part to interest and inform young people from the Pittsburgh region, across the country and beyond about one of the seminal events of 20th century American history, and why it still matters today.


The JFK Assassination and the Media


PITTSBURGH, Oct. 3, 2013 -- /PRNewswire-USNewswire/ -- Despite that it happened a half-century ago, the assassination of President John F. Kennedy remains so relevant today that it has drawn together 30 scientific, legal and investigative experts as well as scholars, journalists and authors to discuss and explore this historical event's continued significance.
Reporters are invited to take advantage of this rare gathering of experts and authorities on the subject, who will be in Pittsburgh Thursday, Oct. 17, through Saturday, Oct. 19, for Passing the Torch: An International Symposium on the 50th Anniversary of the Assassination of President John F. Kennedy at Duquesne University.


Among the featured conference presenters are:


Hosted by Duquesne University's Wecht Institute of Forensic Science and Law, the conference will delve into existing evidence and examine new insights and theories on the president's assassination.
Cyril Wecht believes that public interest in the case continues to be high and that further study is essential. "We, as Americans, need to know the truth," he said. "We need to be aware of historical matters, such as the Kennedy assassination, that are important to all of us and that, if ignored, have a very dangerous potential of breeding further secrecy, complacency and lies."

Duquesne University Founded in 1878, Duquesne is consistently ranked among the nation's top Catholic universities for its award-winning faculty and tradition of academic excellence. Duquesne, a campus of more than 10,000 graduate and undergraduate students, has been nationally recognized for its academic programs, community service and commitment to sustainability.
www.duq.edu.
COMMENTS:


This will be a great conference.  I was at Duquesne for the 40th anniversary conference of Kennedy's murder.  No other conference in the world could top the speakers they had.  I'm a student of the assassination and I'm spending dollars I don't have to get to it.  If you can attend even one day of the conference you will be a changed person.  It's almost a spiritual experience.- R. Truitt
Posted by William Kelly at 4:03 PM


If your not sure if you want to go the this symposium, think again. The 40th anniversary conference was the best in the land. This years is promising to be bigger & better. I would encourage all who can to please do so. Thanks...